III. Impact of a Slowdown in U.S. Growth on the Euro-Area Economy1

1. The view that the euro area may be relatively well insulated from the adverse spillover effects of a sharp U.S. growth slowdown has rested largely on the observation that, since direct trade linkages between the euro area and the United States are relatively small, spillover effects from the U.S. slowdown would be expected to have only a marginal impact. However, economic developments in the euro area, the United States, and Japan are much more closely correlated than would be suggested by trade linkages alone. When consideration is given to how financial and exchange markets might react to slower U.S. growth and to the growing linkages between U.S. and euro-area businesses and financial firms, these spillover effects could be quite substantial, contributing to significantly lower euro-area growth.

2. Historically, there is a relatively weak correlation between fluctuations in the growth rates of U.S. and euro-area GDP, with this correlation being particularly weak during sharp cyclical swings in the U.S. growth rate (Figure 1). In part, the weak correlation reflects the relatively small direct trade links between the United States and the euro area. For example, exports of goods to the United States account for about 13 percent of total euro-area exports and 14 percent of imports (1¾ percent and 1½ percent of euro-area GDP, respectively).2 However as Figure 1 illustrates the co-movement (with a one- to two-quarter lag) in U S and euro-area growth rates appears to have increased markedly since the mid-1990s.

3. The euro area would also be exposed indirectly to the effects of sharply slower U.S. growth through the impact of that slowdown on other countries. Asian countries, in particular, could be hard hit by a U.S. slowdown since the United States is a major export market for many of these countries. Currently, Asia (including Japan) absorbs some 12 percent of euro-area exports. Asian suppliers of products for the technology sector could be especially hard hit by falling U.S. investment, and euro-area exports to these countries are likely to slow as a consequence.

4. A sharp slowdown in U.S. economic growth would generate second-round effects on domestic income and demand in the euro area, arising out of the slowdown’s negative impact on traded goods and services. In turn, euro-area consumer and business confidence is likely to be adversely affected. Business confidence in the euro area also appears to be correlated with that in the United States, with the euro area lagging by several months during recent cycles; this suggests that the decline in U.S. business sentiment in 2000 may not yet be fully reflected in confidence levels in Europe (Figure 2). Consumer confidence in the euro area could also decline from its recent highs, although it has proved to be relatively robust in recent months.

5. If there were to be a significant U.S. slowdown, it could trigger and be reinforced by a further substantial drop in U.S. stock prices. This would, in turn, be expected to take a toll on euro-area stock markets, with additional negative implications for business and consumer confidence in the euro area. Movements in the U.S. and euro-area stock markets have been strongly correlated since the mid-1990s; in the past couple of years, particularly high correlations are evident in the prices of the stocks of “high technology” companies (Figure 3). In particular, recent declines in euro-area share prices have reflected a fallout from financial difficulties encountered by telecommunications companies in the United States and in Europe and a general revaluation of prospects for information technology companies Moreover, European investors now have a significantly larger stake in U.S. asset markets, especially the stock market. Flows of portfolio investment from the euro area to the United States have expanded rapidly in recent including a dramatic increase in euro-area flows into U.S. equities (Figure 4) While precise data, are not available euro-area holdings of U.S. equities appear to have reached between 5 and 10 percent of euro-area GDP in 2000 with these investments in 2000 alone amounting to around 1½ percent of euro-area GDP.

6. The strength of the U.S. economy and widely held perceptions that returns on investments in the United States were higher than in the rest of the world stimulated large inflows of capital to the United States and contributed to the substantial appreciation of the U.S. dollar since early 1995. A sharper-than-expected slowdown in the U.S. economy accompanied by a further large decline in U.S. equity prices could trigger a fall in the value of the dollar and significant appreciation of the euro. In such circumstances, euro-area producers would be faced with much stiffer competition in euro-area, U.S., and third-country markets.

8. MULTIMOD does not fully capture possible spillover effects that stem from the increasing links between business and financial firms in the United States and in the euro area that have developed over the past several years. Euro-area businesses have substantially increased their ties to firms in the United States. At present, some 20 percent of the revenues for companies listed on euro-area stock exchanges are estimated to come from exports to the United States or from their U.S. subsidiaries.3 In 1999, earnings from direct investments in the United States amounted to 2.3 percent of GDP in the Netherlands and to 0.2-0.3 percent of GDP in France and Germany. Global mergers and acquisitions quadrupled to $1. 2 trillion between 1997 and 2000, with about 40 percent of the companies originating these deals being based in the euro area. In turn, a significant part of this mergers and acquisitions activity was conducted by euro-area companies in the United States Mergers and acquisitions announced in 2000 implied a net inflow of around $200 billion to the United States and a net outflow from the euro area of about $300 billion. Reflecting the globalization of world financial markets, euro-area financial institutions have significantly raised their presence in the United States. In so doing, they tended to increase their exposure in the fastest growing sectors of the U.S. economy (such as telecommunications), to bid down credit spreads, and to take on more lesser-quality U.S. borrowers. Hence, a substantial deterioration in U.S. credit quality could contribute to a tightening of credit conditions in euro-area countries as these financial institutions attempt to cope with their losses.

Averages for 1997–99; staff calculations based on Eurostat trade data.

Estimate of HSBC, cited in the Financial Times of February 14, 2001.

International Comparison: Real GDP Growth in Euro Area, United States, and the Rest of the World 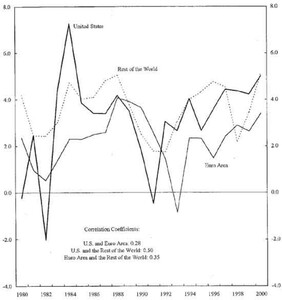 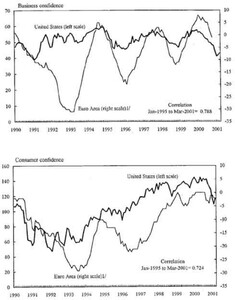 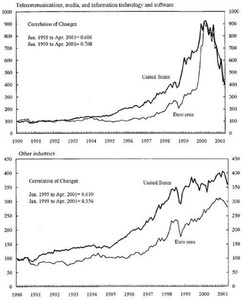 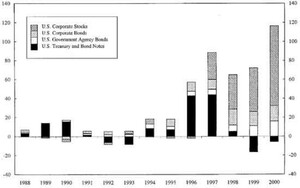