1. Structural reform and deregulation have been actively pursued in Japan over a number of years, especially since the Hosokawa administration in 1993. Recognizing the need for structural reform to reinvigorate the economy, the authorities began developing specific action plans for deregulation, Since then, two three-year deregulation programs (FY1995–97 and FY1998–2000) have been set out and several economic stimulus packages have contained deregulation measures. In 1996, the Hashimoto administration launched a comprehensive structural reform initiative, covering six areas: government administration, economic structure, financial system, fiscal structure, social security, and education (later added), which continues to guide the reform agenda. At the same time, the Regulatory Reform Committee (RRC), the Economic Strategy Council (ESC), the Industrial Competitiveness Council (ICC), and the Economic Council (EC) have provided input into the government’s reform efforts (Box V.1).

The Regulatory Reform Committee (RRC), previously the “Deregulation Committee,” was established in January 1998 as the principal vehicle for regulatory reform discussions. 12 members (originally 7) include representatives from the business, labor, and academic communities. The current government program, the “Three-Year Program for Promoting Deregulation (FY1998–2000),” was revised at the end of FY1998 and 1999, on the basis of the RRC’s recommendations. Measures taken under the current and preceding (FY1995–1997) programs include the liberalization of the mobile phone, transportation, distribution, and power industries. The financial sector measures implemented under the Big Bang initiative also were part of these programs.

The Economic Strategy Council (ESC) was established in August 1998 to formulate a comprehensive strategy to revive the economy and to build a prosperous economic society in the 21st century. The members comprised 10 business leaders and academics. The ESC report of February 1999, “Strategies for Reviving the Japanese Economy,” listed 234 proposals with indications of the necessary legislative response, in three strategic steps.

Many of the measures in the November 1999 stimulus package, including the early submission of bills to facilitate corporate restructuring, reflected the recommendation of the ESC.

The Industrial Competitiveness Council (ICC) was established in March 1999 to evaluate ways to enhance competitiveness of Japanese industries and productivity. The members consisted of 16 Ministers and 17 business leaders. Many ICC recommendations were reflected in the government’s policy package of June 1999 to promote employment and support corporate restructuring. In addition to the creation of 700,000 new jobs, renewed focus on job training, and revision of unemployment insurance, the June package included important legislation geared to liberalizing job placement services and worker-dispatching business, facilitating business transfers, and providing economic incentives for corporate restructuring.

The Economic Council (EC), a permanent advisory group reporting to the Prime Minister on the medium- to long-term conduct of economic policy, consists of 23 members. The EC submitted a report, “Ideal Socioeconomy and Policies for Economic Rebirth,” in July 1999. The report provided a vision of the economy in 10 years time, dealing with issues such as the establishment of a “knowledge-based” economy, change in Japan’s demographics, globalization, and environmental concerns. Its advocated policy guidelines include:

2. The following sections discuss recent developments in the field of structural reform and deregulation. Sections B through D describe steps taken to facilitate corporate restructuring and regulatory reform more broadly, as well as developments in government administrative reform.2 Section E draws a brief road map for further regulatory reform in Japan that would provide a foundation for sustained economic growth in the future.3

3. The main measures put in place over the past year to facilitate corporate restructuring include the following:

4. The corporate sector has begun to respond to these reform initiatives. An increasing number of announcements of restructuring plans among major enterprises reflect efforts to cut input and labor costs, focus on core businesses, and search for new profitable opportunities. About 40 applications from a wide variety of companies were made under the IRL through the end of May 2000. Filings for reorganization under the new CRL, mostly from construction and manufacturing companies, are running at an annual rate of about 600, compared to about 300 annual cases under the old Composition Law. There is also growing evidence of voluntary implementation of the improved accounting standards by some large firms, even before the rules become mandatory.

5. Underlying the regulatory reform process is the principle of shifting from prior approval to retrospective supervision. The regulatory approach in the past imposed direct regulations through prior approval and related administrative actions. In contrast, the new approach will set out clear and specific rules, while conducting supervision only ex post on the compliance with the rules. The shift requires more than simply abolition of existing regulations, but also reform of the approach to regulation.

6. A number of regulatory reforms were put in place based on the “Three-Year Program for Promoting Deregulation (FY1998–2000).” As of October 1, 1999, halfway through the program’s duration, about 80 percent of the 917 reforms listed had been started, while 50 percent had been completed. Major achievements include the following:

7. The government expanded the current deregulation program at the end of March 2000, increasing the number of items from 917 to 1,268. The newly added items included:

8. The reform of government administration is on track following plans laid out in legislation in June 1998:

The number of the central government ministries and agencies will be reduced from 23 to 13 on January 6, 2001, following the agenda stipulated in the Basic Law for Government Reform in June 1998 and succeeding laws on the specifics in July 1999.

9. The need for comprehensive reform plans has been voiced by a variety of observers, including in the 1999 OECD report on deregulation.11 The priorities are:

Reforms in the fiscal area and financial system are covered in chapters II and IV, respectively.

A rough estimate by the Economic Planning Agency in 1999 suggested that deregulation over FY1990–97 had expanded demand by ¥8.2 trillion per year on average and allowed consumers to save ¥6.6 trillion over 8 years due to lower prices.

Larger firms tended to file under the Corporate Reorganization (Kaisha-Kosei) Law, but this was too costly for smaller firms in terms of money and time.

Accounting standards introduced in April of a particular year are reflected in financial statements released after the closing of that financial year (i.e., after March 31 of the following calendar year).

According to a study by the Management and Coordination Agency, Japan’s government employees (including national and local civil servants and employees in government corporations, but excluding those in the military) per 1,000 population was 36, compared to 87, 59, 76, and 67 for France, Germany, the United Kingdom, and the United States, respectively, as of FY1998.

For a summary of the OECD report, see Chapter V on Structural Reforms and Deregulation in the 1999 Economic and Policy Developments Paper (IMF Staff Country Report No. 99/114). 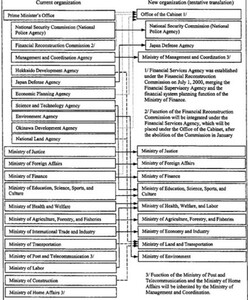