1. Financial markets were relatively stable over the past year, including around the turn of the millenniumb. The Bank of Japan’s (BOJ) policy interest rate, the uncollateralized overnight call rate, remained at virtually zero—the February 28 blip was due to concerns about possible computer problems on February 29 (Figure III.1). Other short-term money market rates, including the 3-month Gensaki rate, were also stable. The yield on newly-issued 10-year government bonds fluctuated in a 50 bps range (about 1.5–2.0 percent), compared to a 150 bps range during 1998–99. Bank funding premia, including the 3-month Japan premium, the spread between the 3-month certificate of deposit rate and the Gensaki rate, and the premium on 2-year bank deposits relative to same-maturity government paper, were relatively small and rose only modestly in response to concerns about possible computer problems at the end of calendar and fiscal 1999 (Figure III.2).

2. The stance of monetary policy remained unchanged over the past year. The BOJ Monetary Policy Board announced in February 1999 that it would guide the overnight call rate to “as low as possible” and added in April 1999 that it would maintain this policy “until deflationary concerns are dispelled” (the so-called zero interest rate policy). Since then, the monetary policy guideline has remained the same except for some minor changes in October 1999, when the Policy Board dropped language about avoiding excessive volatility in short-term financial markets and maintaining market function, as the volume in the call money market had stabilized at about half its previous level and financial institutions were not experiencing any difficulties in procuring or disposing of funds.2 The tightening of monetary conditions in the summer of 1999 reflected the rapid appreciation of the yen. The Policy Board decided not to change the monetary policy stance in response, but did issue a statement in September 1999 explaining why it had decided against further easing (an unprecedented move).3

3. The BOJ expanded the range of its money market operations in October 1999 to help address liquidity demands including those stemming from Y2K, though the new instruments did not provide substantially new tools to address monetary conditions more broadly. The BOJ introduced outright purchases and sales of short-term government securities, in addition to its current repurchase operations in these securities. The BOJ also added two-year government securities to longer-dated government paper as eligible instruments for repurchase operations. Finally, the BOJ said that it would be flexible in providing liquidity to meet Y2K concerns, including by dropping the rotation system for participation in money market operations.

4. The BOJ established a repurchase facility for the government’s Trust Fund Bureau (TFB) in March 2000 to avert possible money market volatility resulting from withdrawals from the postal savings system. As discussed in the chapter on fiscal developments, the maturation of a substantial amount of ten-year postal savings deposits during 2000–01 may put funding pressure on the TFB, as the postal savings system is its key source of financing. After indicating in November 1999 its readiness to provide temporary liquidity to the TFB, the BOJ announced in March 2000 the details of the repurchase facility, which will remain in effect until March 2002: (i) the BOJ will undertake repurchase operations in government bonds if (and only if) a TFB auction of government bonds fails to attract enough market demand; (ii) rollovers that extend the maturity of a repo agreement to more than 3 months are subject to BoJ approval, and (iii) the ceiling on the outstanding amount of such rollovers is ¥7.8 trillion, equal to the amount of government bonds purchased by the TFB from the market between June 1996 and September 1999.4 Since April 2000, the TFB’s monthly auctions of ¥300 billion of government bonds have been fully subscribed, so the BOJ has not made any purchases.

5, The BOJ’s main instruments for adjusting liquidity have remained outright operations in government securities and repurchase operations in government and corporate securities.5 To counter upward pressure on bank funding premia stemming from computer concerns, the BOJ injected large amounts of liquidity in December 1999 and March 2000, mostly through outright purchases of short-term government securities and repurchases operations in government securities and commercial bills (Table III.1). This liquidity was reflected in an increase in banknotes in circulation and—especially—a sharp rise in excess deposits at the BOJ in the final days of 1999 to ¥23 trillion. Cumulative excess reserves during the mid-December to mid-January reserve holding period rose to about ¥300 trillion, much higher than in previous months (Figure III.3). While the BOJ re-absorbed this liquidity during the first two weeks of January, with excess deposits returning to pre-Y2K levels by mid-month, excess reserves increased again towards the end of the fiscal year in March 2000. Separately, the recent rise in government deposits is in preparation for the maturation of large amounts of postal savings deposits starting in April 2000.

6. Simple calculations in the spirit of Taylor (1993) suggest that the current monetary policy stance is somewhat tighter than warranted by the current inflation rate and output gap (Figure III.4).6 The actual overnight call rate is compared to the “desired” level delivered by a policy reaction function based on a Taylor rule, starting in the second quarter of 1991, when the overnight call rate peaked.7 In line with Mori, Shiratsuka, and Taguchi (2000), assumptions include interest rate smoothing (a partial adjustment coefficient of 0.85 on the lagged actual call rate) and two sets of weights on the inflation rate and the output gap: one with similar weights (1.5 and 1.0, respectively) and another with much greater weight on the inflation rate than on the output gap (2.0 and 0.3, respectively). During the past year, the “desired” call rates given by both sets of weights have been consistently below the actual call rate, indicating that further monetary easing would have been warranted, though the discrepancies narrowed in the first half of 2000. However, Taylor-rule calculations must be interpreted with caution, as they depend crucially on the estimated output gap, which is especially uncertain at present; in addition, a forward-looking monetary policy would tend to put some weight on the gap between forecast and target inflation, rather than on the gap between actual and target inflation.

7. The comparison of the real short-term interest rate with the “neutral” rate, as suggested by Blinder (1998), suggests that monetary policy remains accommodative, though it has become somewhat less so over the past year. Mori et al. (2000), estimate the “neutral” rate by averaging the difference between the official discount rate and realized year-on-year consumer price inflation over the period 1883–1986. The “neutral” rate is considered to lie between 1.72 percent (the average if observations exceeding 10 percent in absolute terms are excluded) and 2.85 percent (the average excluding the period around World War II). Since mid-1999, the real short-term rate has increased from about zero to about ½−1 percent, while remaining well below the “neutral” range.

9. Even though short-term interest rates are close to zero, various options would be available to ease the monetary policy stance further, although their quantitative effect remains uncertain.8 First, the announcement of an explicit inflation target would help to clarify further the BOJ’s policy stance and would likely influence inflationary expectations if backed up by other actions. Second, while additional monetary operations in short-term government securities (on which interest rates are already close to zero) would have little effect, purchases of government bonds with non-zero yields could affect economic activity through portfolio rebalancing and the credit channel. The risk of undermining fiscal discipline, moreover, could be addressed by adopting an explicit inflation target; the consequences of BOJ valuation losses on government bonds (as nominal interest rates eventually rise) could be dealt with by having the government indemnify the central bank against such losses. Third, monetary policy also retains its effectiveness through the foreign exchange market. While Japan’s trading partners would be affected by a more depreciated yen, they would benefit from a stronger recovery in Japan.

10. Notwithstanding the rapid growth of the monetary base, broad money growth slowed to about 2 percent year-on-year (Figure III.6). The slowdown reflected primarily a decline in the precautionary demand for money following the stabilization of the financial system and the easing of the credit crunch. Empirical work by the BOJ, reported in Hayakawa and Maeda (2000), defined the precautionary demand for money as “the liquidity demand of the private sector stemming from future uncertainty towards financing” and measured this demand by using firms’ impression of their financial position from the quarterly Tankan survey. This measure of the precautionary demand for money was crucial to the stability of the estimated long-term relationship between money and economic activity during 1998–99.

12. Bank lending to the private sector showed no sign of recovery. The headline figure fell by 4.7 percent year-on-year in May 2000, while the adjusted data, which correct for loan securitization, loan write-offs, and other special items, showed a year-on-year decline of 2.2 percent.9 The persistent contraction in bank lending reflects several factors: (i) weak demand from corporates, which are able to finance their investment mostly through retained earnings; (ii) weak supply from some troubled banks, which are still trying to reduce risk assets (notwithstanding the overall improvement in banks’ willingness to lend, as reported in the Tankan survey); and (iii) the secular decline in bank intermediation, as securities markets start to grow (see the chapter on Financial System Issues). The sharp acceleration of the contraction in lending by second-tier regional banks reflects in part the decline in the total amount of government loan guarantees, which supported the main borrowers from second-tier regionals—small and medium-sized enterprises.10

The current monetary policy guideline is as follows: “The BOJ will flexibly provide ample funds and encourage the uncollateralized overnight call rate to move as low as possible.”

In its statement, the Policy Board said that it was concerned about the rapid appreciation of the yen, but noted that the exchange rate was not an objective of monetary policy and that it was too early to reach any conclusions about the impact of the appreciation. The statement also reiterated that increased liquidity injections would simply be accumulated as excess funds at money market brokers and that any effect of additional liquidity injections on market expectations would be small and temporary.

The ceiling is equivalent to 12 percent of the monetary base as of end-May 2000. The BOJ certainly has the instruments to absorb this amount of liquidity, if necessary.

The BoJ’s policy is to adjust its holdings of long-term government securities in line with changes in the demand for currency, including through regular purchases of government bonds (so-called rinban operations).

The adjusted data are not shown in Figure 7 because they are only available starting in October 1998. 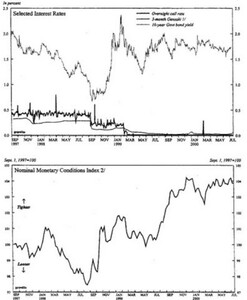 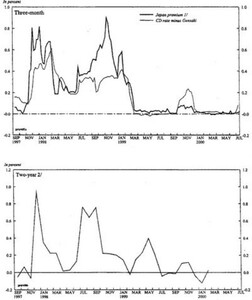 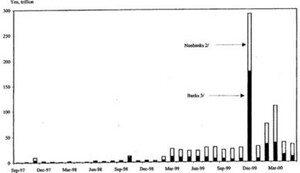 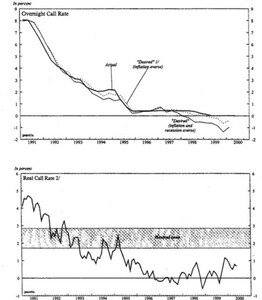 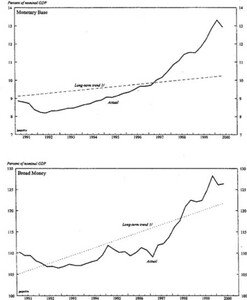 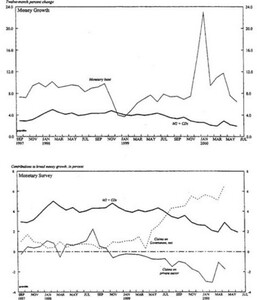 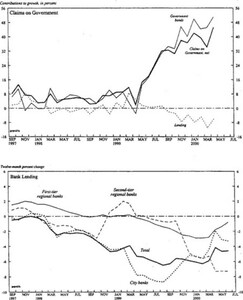