99. The key tasks of tax policy are to contribute to macroeconomic stabilization and demand management, while at the same time promote and efficient resource allocation and an equitable distribution of resources. The current tax system in Ecuador falls short of these objectives in several important respects. First, the role of fiscal policy in macroeconomic management is severely encumbered both by the dependence of government revenues on the petroleum sector (and hence, world oil prices), and by a high degree of earmarking of revenues. Second, the tax system has low yield; it has a number of design flaws that has distortive effects; and complex rules, frequent changes, an uneven and unpredictable enforcement result in a serious lack of transparency. This chapter provides an overview of these shortcomings and examines how the Ecuadoran tax system compares to those of other countries in Latin America and gives a summary of recommended reforms.

100. Two factors hamper the effective use of fiscal policy in macroeconomic stabilization efforts. One is the dependence of central government revenues on the petroleum sector. In 1998, 4.5 percent of GDP or almost 28 percent of total revenues came from this sector, about the same as the other major oil producers such as Mexico and Venezuela (Table VI. 1). At the same time, taxes from nonpetroleum sources yielded only 11.8 percent of GDP in revenues; among the lowest in the region. However, the volatility in world oil prices exerts a significant influence on the revenue contribution from the petroleum sector. Its share of total revenues was about 45 percent in 1995 and, as oil prices have recovered from their 1998 low, a similar share is projected for 2000.

101. The combination of not having a functioning oil stabilization “fund,”59 and not having regular access to external financial markets has imparted a distinct pro-cyclical bias in fiscal policy during the period 1991-2000. In those circumstances, the government has been left with very limited possibilities for smoothing out the impact of an external shock (e.g., a change in world oil prices or a change in external interest rates) on the fiscal accounts. As illustrated in Figure VI. 1a for the period 1991-2000, a decline in capacity utilization (a slowdown of actual growth relative to trend growth) has been systematically associated with fiscal policy becoming more contractionary (a decline in the fiscal impulse) and vice versa.60 This bias appears somewhat less pronounced if the calculation above is done for the period 1991-99, as illustrated in Figure VI. 1b; the fiscal impulse then turns counter-cyclical in two years: 1995 and 1998.61 Rather than indicating a deliberate policy stance, however, this counter-cyclical impulse is probably indicative of a temporary relaxation of the external financing constraint—these two years essentially follows the completion of the commercial debt restructuring with Brady bonds (1994) and the floating of Eurobonds (late 1997). During the remainder of this period, Ecuador has had very limited or no access to external financing, and the absence of a petroleum fund has essentially “forced” a procyclical fiscal policy.

102. A second problem factor is the degree of earmarking of government revenues. For 2000, it is estimated that about 64 percent of central government revenues are earmarked for specific purposes. These earmarked funds are partly for expenditure items within the central government budget (i.e., the pension fund, health, and education) and partly for transfers to subnational institutions (local governments, regional development funds, universities, etc.). Combined with a very high interest bill (almost 10 percent of GDP in 1999-2000), this earmarking sharply reduces the flexibility in expenditure policy and makes key government programs subject to the annual fluctuations in petroleum revenues.62 Moreover, since local governments receive a substantial portion of their current revenues from this arrangement, they also have little incentive to introduce their own tax instruments.

B. Key Weaknesses of the Tax System

103. The low yield from nonpetroleum taxes relative to other Latin American countries is illustrated in Table VI. 1. Ecuador is at the low end of the scale for all major types of taxes, with the exception of trade taxes; total nonpetroleum tax revenues amounted to less than 12 percent of GDP in 1998. To a significant extent, this is the result of low tax rates and a narrowly defined tax base.

104. For indirect taxes—VAT and excises—a key issue is relatively low tax rates. The VAT rate was 10 percent when the tax was introduced, and increased to 12 percent in 1999. In a Latin American perspective, the rates range from 23 percent (Uruguay) to 5 percent (Panama), but Ecuador’s immediate neighbors (Peru, Venezuela, and Colombia as well as Chile) have rates in the 15 to 18 percent range. At the same time, the base for the VAT is comparable to that of other countries (Table VI.2), and the efficiency of collection, relative to the base, is not out of line with that of other countries in the region. The yield from excises is also low because there is no tax levied on domestic fuels.

105. Personal income taxes yield low revenues both because rates are low and exemptions are high (Table VI.3). Both the maximum and minimum rates are among the lowest in Latin America, while the personal exemption threshold is among the highest. Allowing taxes paid under the VAT and the financial transaction tax as creditable against the personal income tax liability further erodes the revenue yield. For payroll taxes, on the other hand, tax rates are relatively high in a regional comparison (Table VI.4), yet significant components of salary income are not included in the tax base.

106. The tax system also has important distortive effects. Import tariffs are levied at a relatively high average rate and with high dispersion of rates across different commodities.63 This obviously contributes to a bias toward allocating resources to protected, but potentially inefficient, domestic industries.64 The financial transactions tax, currently levied at a 0.8 percent rate, encourages financial disintermediation and thus inefficient credit allocation, as well as increases the cost of debt finance for investments. Finally, the high tax rates on payroll increases the cost of labor and encourages informal employment contracts.

108. To ameliorate these weaknesses, recent recommendations for tax reform have emphasized measures both of a general and specific tax policy nature. At the general level, the proposals have focused on:

109. At the more specific tax policy level, the main proposals have been:

110. The fiscal impulse calculations discussed above are based on the methodology used to assess fiscal policy in the Fund’s World Economic Outlook. On the assumption that nominal government revenue is unit elastic with respect to actual nominal output, while nominal government expenditure is unit elastic with respect to trend nominal output, the cyclically-adjusted budget balance (CABB) can be estimated as;

Where t0 and g0 are the shares of total revenue and government expenditures, respectively, in nominal output in the base year 0, Yt is actual nominal output and Y* t is trend output in current prices in year t. The observed budget balance in the base year is thus taken as the benchmark balance against which the balance in other years is judged to be expansionary or contractionary.

The fiscal stance (FIS) is defined as the difference between the CABB and the actual budget balance (ABB):

A change in the fiscal stance relative to GDP from one year to the next provides an indication of the fiscal impulse, that is, whether fiscal policy is becoming more of less contractionary or expansionary.

The concept of trend growth used here is identical to that in Chapter II; i.e., by applying a Hodrick-Prescott filter to real GDP growth to smooth this series. Capacity utilization is then defined as the difference between actual and trend growth; i.e., if capacity utilization is positive, actual growth exceeds the trend. The base year for the calculation is 1993, the year when the difference between actual and trend growth was the lowest.

Such a fund may have two objectives: to provide some short-term smoothing of petroleum revenues to the budget in a situation of volatile oil prices, and to provide some long-term consumption smoothing of petroleum revenues. To meet the first objective, the annual petroleum revenues absorbed by the budget would be calculated on the basis of a fairly constant benchmark oil price; any deviation of actual government revenues from this amount—depending on whether the actual oil price is above or below the benchmark—would be either channeled to or disbursed from the stabilization fund (to the budget). Under the World Bank’s SAL, approved in June 2000, the government is committed to establish an oil stabilization fund.

The methodology behind the calculations in the two charts is explained in Section D.

The calculation of trend output used here, out put, growth smoothed by a Hodrick-Prescott filter is quite sensitive to the choice of end-points in the data series; this could impact on both the capacity utilization and the fiscal impulse.

E.g., a substantial portion of petroleum revenues is earmarked for educational expenditures.

See Section IX for further discussion of the trade system.

Another probable source of distortions is the treatment for tax purposes of depreciation allowances in an inflationary environment, which would create a bias in investments between categories of capital with different lifetimes.

The government is currently planning to eliminate this tax by end-2000 in the context of a broader tax reform. However, the reporting requirements currently imposed on banks, which have become a useful tool in enforcement of other taxes, are to be retained. 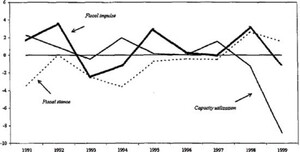