18. This chapter provides an overview of Ecuador’s economic growth over the past three decades. The objective is to highlight some of the key features of long-term growth, and thus to set the stage for the subsequent chapters. The discussion is divided into three sections: the first looks at Ecuador’s growth in a regional perspective, the second uses a production function approach to calculate the contribution to growth from capital, labor, and total factor productivity, and the last looks more closely at growth in the 1990s.

A. Growth Performance in a Regional Perspective

20. In 1998, Ecuador had a GDP per capita, measured in PPP terms of US$3,003; only marginally higher than Bolivia, and about one fourth of that in Argentina.

21. However, the differences between Ecuador and the other countries in the sample are far less pronounced in terms of conventional factors of growth, e.g., accumulation of physical and human capital. The average rates of investment and domestic savings relative to GDP in Ecuador have been at a broadly similar level to those of the other countries for the whole period. Moreover, the improvements in a few selected human development indicators have been similar to the other countries (see Table II. 1).

22. The reasons behind the turnaround in the mid-1980s for Argentina, Bolivia, Chile, and Peru have been researched extensively and documented elsewhere: a change from unsustainable policies and severe macroeconomic instability, culminating with the debt crisis in the early 1980s, to the subsequent introduction of more stable macroeconomic policies combined with structural reforms. Ecuador’s different experience can, to some extent, be ascribed to exogenous shocks. The strong growth in the 1970s was driven in large part by discoveries of new petroleum fields in the eastern region of the country and the sharp increase in the international price of oil in 1972-73. Similarly, the decline in oil prices in the early 1980s and the devastating earthquake in 1987 clearly dampened growth. However, there is also ample evidence, discussed in later chapters, that Ecuador’s failure to pursue sound financial policies in combination with the lack structural reforms has been another important factor behind the disappointing performance, especially in the 1990s.

B. Sources of Growth in Ecuador

23. This section provides estimates of the contributions from capital, labor, and total factor productivity to potential output growth for Ecuador during 1975-93.6 First, production functions for two separate sectors (“oil” and “non-oil”) are estimated econometrically, using an error correction model.7 These production functions provide the basis for a growth accounting framework that allows us to calculate total factor productivity (TFP) and the contribution to growth from capital, labor, and TFP (see Annex).

24. The estimation results for the two production functions—oil and non-oil sectors—are presented in Tables II.2a and II.2b.8 In both sectors the dependent variable is the log of the ratio of sectoral GDP to sectoral labor input. Three general results apply to both sectors:

25. For the oil sector, the regressors are a constant, and four other variables which interacts with a step dummy that equals one for 1974 onwards and zero otherwise: the constant, the change in the log of capital to labor, the log of the ratio of GDP to labor lagged, and the log of the ratio of capital to labor lagged. The step dummy for 1974 was statistically significant, indicating that the existence of a structural break after the exogenous shocks of years 1972 and 1973, and thus that a change in the key parameters of the sector could not be rejected. Similarly, the three impulse dummies for the years 1972, 1973, and 1987 were statistically significant, accounting for shocks to the sector.

27. The calculation of the contributions to growth is summarized in Table 3. The Ecuadoran economy grew at an average annual rate of 3.6 percent in real terms in 1975-93 (3.4 percent in the non-oil sector, and 4.8 percent in the oil sector). Four points are noteworthy from Table II. 3:

28. This simple growth accounting framework obviously cannot establish what “caused” economic growth. What it does establish, however, is that TFP has been significantly less of a factor behind growth in Ecuador than in other countries in the region; typically periods of high growth are associated with periods of high TFP contribution to growth (Table II. 4). Total factor productivity is a broad measure of the flexibility of an economy and thus its ability to allocate a growing stock of productive resources to its most efficient uses. This suggests that there are important structural rigidities in the Ecuador economy that inhibit a more vigorous growth response.

29. Data limitations do not permit the above detailed analysis to be carried beyond 1993. However, a closer examination of national accounts data for the period 1990-99 reveals some interesting observations:

A Cobb-Douglas specification of the production function (in logs) can be written as:

If neither the trend nor the human capital term is significant the production function reduces to the intensive form:

The production function equation was estimated using cointegration techniques that are particularly appropriate for uncovering the long-run relationships between inputs and outputs.10 Once α is estimated, a total factor productivity series (in logs) can be calculated as:

Neither the capital stock nor the labor measure (which corresponds to the economically active population concept) is adjusted by the degree of utilization or unemployment. This does not affect the estimates of the capital share, and thus of the long-run contribution of capital and labor. However, it may affect the estimates over shorter horizons. One way to address this problem is to use “smoothed,” or trend, estimates of TFP, using the Hodrick-Prescott filter. By replacing this smoothed TFP, together with the estimate of the capital share in equation (2), an estimate of potential output is calculated.

The other countries in the sample are: Argentina, Bolivia, Brazil, Chile, Colombia, Peru, and Venezuela.

The analysis could not be carried beyond 1993 because of lack of reliable data on capital stocks after this date.

The oil sector is defined to include all of division 2 in the ISIC classification; it thus corresponds to the mining sector. In Ecuador, division 2’s dominant components are crude oil and gas; it also includes refining of petroleum and other mining.

The test for cointegration is based on the OLS coefficient of the lagged dependent variable in an autoregressive distributed lagged model (eventually) augmented with leads of the regressors. For an application of this modeling strategy, see Belke and Golke (1996).

Series of TFP growth in both of the sectors were estimated by subtracting a weighted sum of factor inputs from GDP growth, using as weights the factor share estimated in the regressions in Tables II.2a and II.2b. The TFP series were then smoothed using a Hodrick-Prescott filter.

Since it is possible to find the presence of structural breaks during the sample period, we have tested for stability of the estimating equations as well as tried several step and impulse dummies. 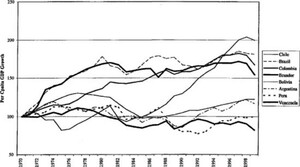 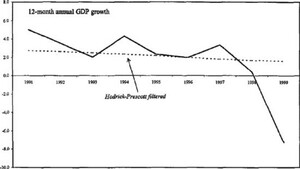 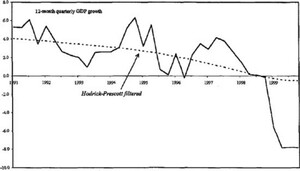