1. Recent data revisions and developments regarding productivity growth suggest that the growth rate of potential output is likely to be higher than previously thought. First, comprehensive revisions to the National Income and Product Accounts (NIPA), released in October of 1999, show that real GDP over the last three decades grew at a faster rate than the previous data indicated. In particular, over the period 1992-98, the average annual growth of GDP based on the new data was 3.6 percent rather than 3.2 percent based on the previously published data (Figure 1). Several factors contributed to the stronger rates of growth in the revised data, including: revisions to source data; new methods to adjust for inflation; and updated definitions of spending categories, with the most important being the inclusion of computer software in investment.2 Based on gross domestic income data, average annual output growth was 0.4 percentage point higher.3 Second, the production and use of information technologies also have contributed to boosting productivity growth, and suggest that potential output growth has increased. Labor-productivity growth has accelerated to about 2½ percent per year during the period 1996-99, well above its average annual growth rates during the 1970s and 1980s.

2. There is a wide variety of methodologies for estimating a long-term trend rate of growth for potential output, ranging from simple detrending techniques, to more structural approaches such as the production function approach. Because none of these techniques is free from difficulties, three different methods were used to determine a reasonable range of estimates for potential growth: the segmented trend approach; the Hodrick-Prescott (H-P) filter; and the production function approach. Based on the previously published data, potential output growth for the period 1990-98 was estimated to be in the range of 2½-2 ¾ percent (Table 1).4 In contrast, based on the revised data, potential output growth is now estimated to be in the range of 3-3¼ percent for the period 1990-99.

3. Among the detrending techniques, the segmented trend approach was used to identify points where the trend rate of growth in GDP may have changed, and in particular to determine whether there was an identifiable trend increase during the current economic expansion. The growth in potential output is assumed to be constant and roughly equivalent to the average annual growth rate between the identified break points. Recursive residual tests were used to identify the break points in the revised chain-linked real GDP series over the period 1959-99. Two break points were found; one occurring in the first quarter of 1975, and the other in the first quarter of 1982; these are the same break points found in the previously published chain-linked real GDP series in 1992 dollars. Using these break points and based on simple log-linear regressions, potential output growth slowed from about 4¼ percent during the period 1960-75, to about 3½ percent during the period 1975-82 and to just over 3 percent in the period thereafter.5 With real GDP growth of around 4 percent over the last three years, another break point in trend real GDP growth in the mid-1990s may well have occurred. However, given the limitations in present statistical techniques, it is not yet possible to identify such a break point.

4. A second detrending technique, the H-P filter, was also used to detrend real GDP.6 Because the H-P filter tends to overweigh the end-points in the series being detrended, potential output was estimated over the period from the peak in output in the fourth quarter of 1973 to the end of 1999 (which is implicitly assumed to be a cyclical high point). On this basis, potential growth was estimated to average 3¼ percent a year.

5. The production function approach models output in terms of underlying factors of production, with output specified as a function of capital, labor, and total factor productivity (TFP).7 Following established practices, the production function was assumed to be a Cobb-Douglas type with constant shares for labor and capital.8 The data series for the potential inputs and trend TFP were extracted by using the H-P filter. Using these detrended series, the growth rate of potential output was estimated to be about 3 percent over the period 1990-98.

6. The staff estimates of potential output growth are similar to those published by the Office of Management and Budget and the Congressional Budget Office, but they are lower than estimates from the OECD and some private sector economic analysts like Macroeconomic Advisers (see Table 1). These higher estimates represent measures of potential that change over time depending on the level of investment. Hence, these estimates of potential growth vary over the business cycle. In particular, the recent strong rates of investment have raised the capital stock and the productive potential of the economy, according to these measures. In contrast, the staffs estimates represent long-run trend rates of growth in potential.

The revised data incorporate new source data which include the 1992 benchmark input-output accounts; recent Bureau of the Census data on wholesale and retail trade, construction, state and local governments; updated international transactions data; and wage and salary data. With regard to adjusting for inflation, newly available CPI data are used to revise historical personal consumption expenditures. The most significant definitional change was that business purchases of software were reclassified as private fixed investment, rather than treated as intermediate inputs. Seskin (1999) presents a detailed discussion of these changes.

These results and methodological details were presented in De Masi, Chan-Lau, and Keenan (1999).

The estimation periods for these log-linear regressions were specified from cyclical peak to cyclical peak in an attempt to eliminate the distorting effects associated with end-points that are at different points in the business cycle.

The capital and labor shares are based on their shares in national income and are 30 and 70 percent, respectively. 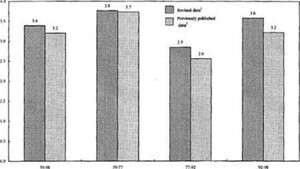