The economy of the Former Yugoslav Republic of Macedonia suffered a setback owing to the Kosovo crisis. The impact of the crisis, however, was less severe. Inflation remained low, the balance-of-payments position and the fiscal situation improved, and indicators of external vulnerability remained satisfactory. The National Bank of Macedonia faced contrasting challenges in the conduct of monetary policy. The pace of structural reforms picked up and a value-added tax was introduced. However, structural weaknesses in the financial system have prevented a more vigorous economic recovery.

The economy of the Former Yugoslav Republic of Macedonia suffered a setback owing to the Kosovo crisis. The impact of the crisis, however, was less severe. Inflation remained low, the balance-of-payments position and the fiscal situation improved, and indicators of external vulnerability remained satisfactory. The National Bank of Macedonia faced contrasting challenges in the conduct of monetary policy. The pace of structural reforms picked up and a value-added tax was introduced. However, structural weaknesses in the financial system have prevented a more vigorous economic recovery.

A. Transformation of Socially Owned and State Enterprises

1. As part of its transition toward a market economy, the FYRM undertook in mid-19932 to dismantle the social ownership system of enterprises inherited from the former SFRY3 Privatization, however, did not gain momentum until late 1994. In early 1995 a special law on the Special Restructuring Program (SRP) mandated the restructuring and privatization of an additional 25 large loss-making enterprises, including the state-owned electric utility and the railways. In April 1996 privatization was expanded to agricultural enterprises and cooperatives. With the privatization process nearing its end, the outcome has been below expectations. Internal ownership by workers and managers has widened, owing to the predominant reliance on insider privatization; the government has been increasingly burdened with the liabilities of large insolvent loss-makers; privatization of the state-owned utilities has not yet been initiated; and, notwithstanding the impact of external factors, the overall financial performance of transformed enterprises failed to improve significantly.4

2. Two state-controlled agencies have been instrumental in assisting the privatization and restructuring process: the Privatization Agency (PA), and the Bank Rehabilitation Agency (BRA). The former also holds the unsold shares of privatized enterprises on behalf of the State (i.e. “residual shares”).5 As of end-June 1999 shares with an appraised value of DM 465 million, representing 11.3 percent of the total appraised value of privatized enterprises, had been transferred to the Privatization Agency. The State’s portfolio largely comprises shares of underperforming enterprises. The BRA is an asset management agency that was initially considered as a temporary arrangement for resolving the portfolio of nonperforming denar-denominated loans of Stopanska Banka, the country’s largest state owned bank. Subsequently, however, additional claims (representing nonperforming foreign currency debts of socially and state-owned enterprises to Paris Club, London Club, and multilateral creditors6) were also transferred to the BRA. To date, most of these nonperforming loans are still on the BRA’s books, as collection of claims by the BRA has been minimal and only a few loans were sold, generally to the original debtors either at a steep discount or using government-issued bonds. The shares associated with the US $121 million debt-to-equity conversion of bank debt effected under the 1995 SRP were transferred from the BRA to the Privatization Agency, following the adoption in April 1999 of the Law on Privatization of State Capital.

3. Although up to 12 transformation models of socially owned enterprises were allowed under the Law on the Transformation of Enterprises with Social Capital, buyouts have been the predominant method of privatization (Table 27). Buyouts, together with the internal shares granted under the “old law,” accounted for about half of the privatizations undertaken as of end-1999. Meanwhile, sales of enterprises to private investors accounted for about 19 percent of total transformations, of which about 10 percentage point went to foreign investors. As of end-1999, a total of 1,488 enterprises with social capital had been privatized, leaving 238 enterprises still awaiting privatization. Payments for the shares have generated minimal amounts of cash, as the bulk of the privatization proceeds was paid in the form of certificates related to frozen foreign currency deposits held by households.7 Moreover, the sale of shares entailed deep discounts, long payment periods, and widespread delays in the collection of payments. Payments through frozen foreign currency deposit certificates increased markedly in 1999 compared with other types of payments, thus reducing the domestic obligations of the State.

B. Financial Performance of the Enterprise Sector

4. Although the financial performance of the enterprise sector as a whole improved slightly during 1996-98, the performance has been disappointing when viewed against the continued privatization and the SRP. The proportion of enterprises suffering losses declined from about 55 percent to 47 percent during 1996-98, and aggregate losses (as measured in terms of the operational balance) of loss-makers fell while aggregate profits of profitable firms increased as a ratios to GDP and sales (Table 28). The decline in the share of lossmakers mainly reflected the superior performance of private firms. The share of loss-making firms increased in the state-owned enterprise sector in 1998. Operational balance as a ratio to sales improved markedly for both loss-makers and profitable firms, mainly reflecting the favorable impact of the July 1997 devaluation, Aggregate losses in relation to sales and GDP were highest among transformed enterprises (nearly 17 percent), which reflects largely higher average wages, and delays in shedding labor, since transformed enterprises remain predominantly controlled by managers and workers inclined to preserve their immediate interests at the expense of profit and investment. Preliminary information for 1999 indicates that the overall financial performance of the enterprise sector remained broadly unchanged despite the Kosovo crisis.

5. There has been a steady rise in the number of illiquid firms8 in all types of ownership categories (Figure 6), despite a decline in the number of loss-makers. This partly reflects greater willingness of creditors to file for the blocking of enterprises’ accounts. About 46 percent of all firms in the formal enterprise sector were faced with liquidity problems as of end-1998, as against 17 percent as of end-1996; and about 42 percent of the enterprises’ workforce was in employed in illiquid firms at end-1998, compared with 24 percent at end-1996. The deterioration of enterprise liquidity has accelerated since 1998, particularly in enterprises under social and mixed capital ownership, reflecting inadequate corporate governance standards, moral hazard stemming from earlier relief on overdue obligations to government and the impact of the Kosovo crisis. Unpaid obligations to the State as of end 1999 amounted to the equivalent of 16 percent of GDP, of which about 11 percentage points had been accrued in enterprises under social and mixed capital ownership.

7. Since 1998, the authorities have attempted to address the financial situation of a core group of 12 major loss-makers through sale or liquidation. Although aggregate losses for this group accounted for about one percent of GDP as of end-1998, mounting losses by these enterprises pose a major threat for the country’s medium-term development as they crowd out bank credit to viable firms and contribute to misallocation of resources. The implementation of the authorities’ enterprise reform program has been considerably delayed, primarily reflecting the authorities’ concerns about the social impact of the reform. However, as part of the authorities’ efforts to secure financial support from the international community, enterprise reform recently regained momentum. As a result, as of end-March 2000, 6 enterprises had been sold either to private investors or workers, including the Okta oil refinery; two enterprises were liquidated; the outcome for Feni, the nickel mining and processing holding company, is pending finalization of an agreement with the World Bank; and agreements on the sale or liquidation of the remainder remains to be addressed. The direct costs for the budget associated with the enterprise reform identified thus far, is expected to amount to about DM 64 million.9 In addition, the government implemented debt-equity swaps in 2 enterprises in an amount of DM 13.1 million. The authorities are identifying a list of additional loss-makers for inclusion in the next stage of enterprise reform under preparation.

8. The legal framework supporting enterprise operations still needs further revamping in order to strengthen creditors rights and the efficiency of the court system. To that end, the amendments to the laws on Bankruptcy, on Execution Procedures, and on Contractual Mortgages, are near finalization. The new bankruptcy law is intended to reduce the excessive complexity of the 1997 Law, to ensure efficient bankruptcy administration by district courts and to reduce the considerable delays in proceedings. Under a new Central Registry Law, the company register is expected to be transferred from the courts to a new central company register. The legal framework for foreign investment is under review.

9. The MSE is comprised of three market tiers.10 Trading of equities also takes place outside the MSE, either in the vast informal market among privatized enterprises or in the Privatization Agency and the Bank Rehabilitation Agency, as part of the process of privatization. Stock exchange transactions plunged by about 70 percent compared to 1998 largely owing to the adverse impact of the Kosovo crisis on enterprise performance and political uncertainties related to the Presidential elections in late 1999. In many cases share prices in 1999 dropped well below their purchase price, making shareholders reluctant to incur losses. A major portion of share trading in 1999 stemmed from increased sales of shares by the Privatization Agency and the Pension Fund. The legal framework on securities trading was reinforced during 1999, with a view to strengthening corporate governance, increasing liquidity, and expanding trading of government-owned securities. As a result, trading requirement on the stock exchange of all unlisted securities was extended until end-2001; delinquent shares can now be reposed by the Privatization Agency; and government agencies’ equity holdings can be combined to attract foreign investors. In late 1999, the government initiated the establishment of a Central Share Registry that will ensure clearing, settlement, and safekeeping of paperless securities.

See SM/98/130; and SM/95/84. Under the Law on the Transformation of Enterprises with Social Capital enacted in rune 1993, all publicly owned enterprises except agricultural enterprises and cooperatives, a number of “strategic” enterprises, and state-owned enterprises (e.g., the electric power, telecommunications, and railway companies) were slated for restructuring or privatization.

Early privatization efforts were undertaken in late 1989 with the enactment of the Law on Social Capital-i.e., the so-called “Markovic Law” -under which employees were allowed to purchase “internal shares,” generally at a substantial discount to their market value. This legal framework was suspended upon FYR Macedonia’s independence in September 1991.

Whenever a purchaser did not wish to acquire more than 51 percent of the shares, the State ended up with up to 34 percent of enterprises’ shares, as 15 percent of the social capital of socially owned enterprises is reserved for the Pension Fund. The requirement to sell residual shares within 30 days of their acquisition was virtually never met.

Claims transferred over time to the BRA had a book value at end-1997 of about US$559 million, of which US$249 million represents denar claims connected to Stopanska Banka’s rehabilitation and US$310 million, foreign currency claims to Paris Club, London Club, and multilateral creditors.

Cumulative privatization proceeds as of mid-1999 amounted to DM 412 million, of which DM 257 million was paid in frozen foreign currency deposit certificates, DM 97 million in bonds issued to banks and DM 58 million in cash.

Including those enterprises whose giro accounts with the Payments Bureau do not contain sufficient funds to cover end-month payment obligations. 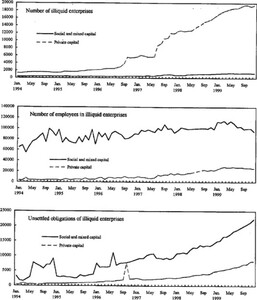