41. Since the 1960s, Luxembourg’s unemployment rate has been the lowest among the EU countries (Figure III-1). Unemployment in Luxembourg was virtually nil until the steel crisis occurred in the mid-1970s. Over the last two decades, the unemployment rate rose to about 3 percent, still the lowest rate in the EU. Apart from the influences discussed in this chapter—labor market institutions and the economic environment—the gradual increase in unemployment may also reflect a subtle measurement issue: until the mid-1970s, unemployment had been a virtually unknown phenomenon,22 and labor market institutions that addressed the unemployment problem had therefore been largely unnecessary. Thus, when these institutions were gradually put in place in the aftermath of the steel crisis, they may also have promoted a more accurate count of the unemployed.

42. Luxembourg’s cumulative employment growth since the early 1980s has been the fastest among the EU countries (Figure III-2). Employment growth stagnated in the 1970s, but has picked up since then, averaging more than 3 percent a year over the last 10 years.

44. The framework has one major shortcoming: some labor market institutions are affected by the level of unemployment and are thus endogenous.24 This problem is most obvious for the average tax rate on labor income (or tax wedge). A pay-as-you-go (PAYG) system—common to many countries in the sample—requires that the social contribution rates are set to meet the costs of unemployment benefits, health benefits, and pensions. All else being equal, this implies that countries with higher unemployment rates tend to have a bigger tax wedge. In the empirical section, therefore, the framework is reestimated without the variable representing the tax wedge.

47. Employment protection rules are strict on dismissal procedures and the use of fixed-term contracts and part-time appointments. Legislation on working time dates from the early 1970s, and is similarly strict. Statutory working hours are 8 hours per day and 40 hours per week, with a maximum daily working time of 10 hours. While collective agreements can be made on a working time pattern below these norms, other types of derogations (like overtime) are strictly regulated by law and limited to exceptional cases. Recently, the National Action Plan for Employment (1998/99) initiated greater flexibility in working time and introduced a reference period of four weeks over which the average working time should be measured. Shorter or longer reference periods (with a maximum of 12 months) can be agreed upon by way of collective bargaining.

48. Reservation wages are high because of generous unemployment insurance and subsequent benefits. The standard payment rate of unemployment insurance is 80 percent of gross earnings. This amounts to a net replacement rate of more than 80 percent when including family and housing benefits. Although unemployment insurance is limited to 12 months, it is followed by a generous social assistance scheme with unlimited duration. The provisions stipulate that after five years of unemployment, the net replacement rate for a low-paid worker at two-thirds of the average production worker’s wage would continue to exceed 80 percent. Social assistance recipients are discouraged from taking small-time jobs, moreover, as the benefit withdrawal rate for additional earnings is close to 100 percent.

49. The empirical framework described in Section C can be applied to simulate the evolution of the unemployment rate in Luxembourg.28 Given that endogeneity problems may occur in particular for the overall tax rate on labor income, the model is reestimated without the tax wedge. The Luxembourg economic environment is represented (counterfactually) by the EU average, while the scores of its labor market institutions (to the extent that they are part of the framework) are estimated conforming to information that is available on them. The estimated scores are provided in Table III-1 and compared with the EU averages.29 While high scores on the first five institutions are likely to have an adverse effect on labor market outcomes, high values on the coordination in wage bargaining and active labor market policies should improve employment and unemployment performance.

50. Under the counterfactual assumption that Luxembourg shared entirely the economic environment of the EU, and with labor market institutions scored as in Table III-1, a simulation of Luxembourg’s unemployment rate yields an increase in the unemployment rate that is well above actual developments (Figure III-3): Between 1965 and 1995 Luxembourg’s unemployment rate rises by an estimated 7½ percentage points, which is more than double the actual increase. The estimated increase can be ascribed to the impact of the counterfactual economic environment (at the EU average) reinforced by the existing rigidities in the labor market.

51. Some qualifications must be made to the empirical results on the evolution of the unemployment rate in Luxembourg. On the one hand, the framework ignores the presence of a few other labor market institutions in Luxembourg: the legal minimum wage, the automatic wage indexation, and the social assistance payments succeeding unemployment insurance. The first two of these institutions are rather specific to Luxembourg, as few countries still have a legal minimum wage, and only one other country (Belgium) appears to apply a similar wage indexation. On the other hand, the framework may exaggerate actual labor market rigidities. Labor market institutions may not be as rigid as the formal description suggests, and there are indeed indications that some of the Luxembourg institutions have been quite flexible under duress.

This approach to analyzing labor market performance and institutions is based on Nickell (1997) and Blanchard and Wolfers (1999).

Official statistics show a zero unemployment rate until the mid-1970s.

Apart from most countries in the EU, the set also includes a number of non-European countries as controls.

This indexation scheme was originally introduction in 1921.

Every two years the government submits to the Chambre Parliament a report on developments in the economy and incomes. If necessary this report is accompanied by draft legislation to raise the level of the minimum wage.

Luxembourg is not part of the original panel study by Blanchard and Wolfers.

The EU averages are calculated using Nickell (1997) and Blanchard and Wolfers (1999). 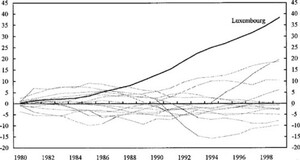 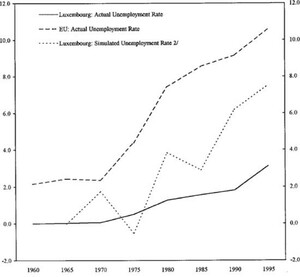