20. The premise of this chapter is that the design of Luxembourg’s overall pension system—i.e., the combination of public (first pillar) and private pension arrangements (second and third pillars)—should aim at providing a stable and sustainable source of retirement income. Given this premise, the two challenges raise different design issues. Population aging—by its nature a slow and largely predictable process—raises the issue of longer-run sustainability of the public pension system. What are the policy options that would help bridge the projected long-run financing gap in the public pension system? By contrast, the possibility of large and persistent shifts in the public pension system’s contribution base—by its nature a rapidly-evolving and largely unpredictable process—raises the issue of robustness of overall retirement income provision. What are the policy options that would help increase the stability of overall pension provision?

21. Restoring sustainability to a pay-as-you-go (PAYG) public pension system has been the subject of a large literature.10 Policy options include parametric adjustments in the basic PAYG policy levers (contribution rate, budget transfers, pension replacement rate, retirement age), administrative reforms, the building up of public pension reserves, and shifting part of pension provision to a funded second pillar. In the context of Luxembourg, the issue of sustainability of the public pension system was addressed extensively in previous staff publications.11 The present chapter focuses on the issue of robustness of Luxembourg’s pension system design in an economic environment of largely unpredictable and persistent shocks. The chapter’s main focus will be on illustrating a range of plausible longer-term scenarios for the public system’s finances.

B. A Sketch of Luxembourg’s Pension System

24. The revenue side of Luxembourg’s first-pillar system relies on pension contributions (for private sector workers) and direct budget financing (for civil servants). The contribution rate for the private sector schemes—shared equally among employers, employees, and the state budget—has been stable at 24 percent of gross earnings since the mid-1980s. An earnings floor equivalent to the minimum wage is exempted from contributions, while the earnings ceiling for contributions is equivalent to five times the minimum wage. Luxembourg’s rapid employment growth since the early 1980s not only allowed to keep the level of the contribution rate constant, but it also underpinned the accumulation of a sizable pension reserve (some 21 percent of GDP at end-1999).16

26. The main parameters affecting the financial condition of a stylized PAYG system can be brought out by considering the system’s basic budget constraint:

27. It is useful to extend the basic budget constraint (2) to allow for the analytical distinction between the two policy challenges discussed at the beginning of this chapter—population aging and variability in the public pension system’s contribution base due to regional shocks.18 Assume that the number of contributors amounts to a proportion γ(t) of the number of resident persons of working age N*. This proportion γ(t)—termed in the following the contributor coverage ratio—will depend on labor force participation, unemployment, and the number of cross-border workers. In large integrated economic areas with broad-based PAYG systems, the contributor coverage ratio will typically be close to the economy’s resident employment ratio (resident employment as a percent of resident working age population) and, apart from cyclical variations, it can be assumed to evolve rather smoothly. In Luxembourg’s particular case, the contributor coverage ratio exceeds the resident employment ratio by a large margin—about one-third of employment is accounted for by cross-border workers—and can also undergo potentially large variations in response to regional shocks to labor demand.

29. Under these assumptions, the effective equilibrium contribution rate of a PAYG system can be re-written as:

where [M*(t)/N*(t)] is the system’s elderly dependency ratio for residents. Thus, equation (3) allows to separate analytically the issue of population aging, represented by the system’s elderly dependency ratio [M*(t)/N*(t)], from the issue of regional variability of employment flows—represented by the contributor and pensioner coverage ratios δ(t) and γ(t).

31. The model used for tracking a range of scenarios for the public pension finances over the period 2000-50 follows broadly the generic projection model structure outlined in Chand and Jaeger (1996, pp. 34-36). These exercises are illustrative and based on broad-brush assumptions that neglect many of the institutional details that characterize Luxembourg’s public pension system.19 The projection model’s key assumptions and underlying data sources include:

32. Three long-run scenarios for the period 2000-50 are used to study the range of possible pressures on Luxembourg’s public pension system:

33. Turning to the implications of these scenarios for the public pension system, in the status quo scenario the pension system dependency ratio remains roughly stable throughout the projection period (Figure II-4). Thus, the financing pressures on the system due to population aging are fully offset by the rapid rise in the contributor coverage ratio owing to massive inflows of cross-border workers. The implied pension cost as a percentage of GDP remains roughly constant over the projection horizon (Figure II-5).

35. In the sharp economic reversal scenario, the pension system dependency ratio rises even more sharply than in the average growth scenario. This reflects mainly a sharply declining contributor coverage ratio as the stock of cross-border workers is assumed to decline to zero during 2006-15.

37. A second generic set of policy options would comprise raising the contributor coverage ratio or decreasing the pensioner coverage ratio, e.g., through increases in effective retirement ages or by providing new incentives to increase labor force participation rates. However, the effectiveness of these particular options in response to large adverse shocks or economic reversals may also be limited: (i) the measures may need to be phased in gradually, in particular in the case of increases of retirement ages; (ii) the economic environment may not be favorable for the required increases in labor force participation rates; and (iii) higher labor force participation rates, while helpful in providing additional resources in the short run, would further increase unfunded pension liabilities of the PAYG system.

38. More diversification of the financing of overall pension provision by moving to a diversified multipillar structure, perhaps benchmarked on Switzerland’s long-standing multipillar approach, would allow Luxembourg to make a significant portion of pension provision independent of local economic booms and busts. While the transition to a multipillar structure would likely involve significant transition costs, an exceptionally favorable fiscal outlook for the next few years should provide ample budgetary scope for far-reaching reforms.

39. Apart from spreading financing risks, moving to a more balanced multipillar structure would likely have further advantages: (i) the impact of shocks on public finances would be mitigated; (ii) future required social contribution rates could be lower than otherwise; (iii) the higher rates of return of funded schemes (relative to rates of return in PAYG schemes) would add to Luxembourg’s locational advantages in terms of labor mobility; and (iv) Luxembourg could draw on extensive local financial expertise to develop funded pension schemes. In this context, the recently adopted laws on international pension funds and supplementary pension schemes appear to have prepared the legal ground for a proactive pension policy.

See Disney (1999) for a review of reform options focusing on OECD countries.

The pension schemes for private sector workers are required to hold a contingency reserve equivalent to at least 1.5 to 2.5 years of benefits.

For simplicity, the contingency reserve is not incorporated in the budget constraint.

For an actuarial study covering the period 1995-2015 that includes a wealth of institutional detail, see Ministere de la Securite Sociale (1995).

Projections of Elderly Dependency Ratios in Luxembourg, France, and Germany, 2000-50 1/ 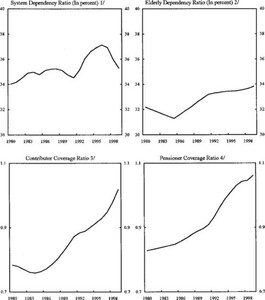 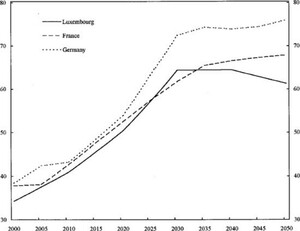 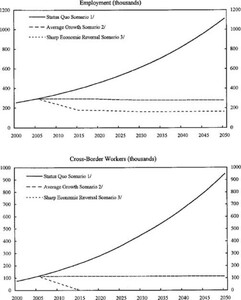 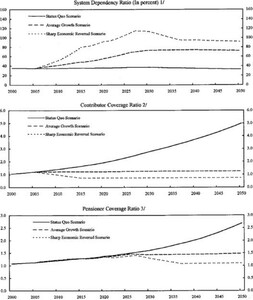 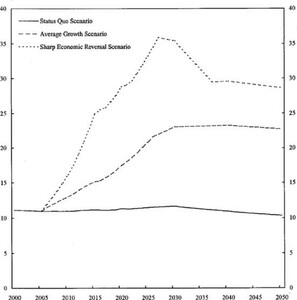