1. Luxembourg’s recent macroeconomic performance has been impressive: economic activity has expanded vigorously, with both real GDP and employment growth exceeding the respective EU averages by large margins; unemployment and inflation have remained low and stable; and Luxembourg’s fiscal performance is virtually unmatched among industrial countries.

2. The following four chapters examine the sources of Luxembourg’s excellent macroeconomic performance and provide background analysis on three policy challenges: (i) diversification of the financing risks of the pension system; (ii) labor market reforms to mitigate rigidities; and (iii) effective supervision of the large and mainly foreign-owned financial sector.

3. Chapter I traces Luxembourg’s fast-paced growth over the last 20 years to a virtuous growth circle driven by external economies of regional specialization and sound economic policies, with high labor and capital mobility providing the factor inputs needed to accommodate rapid growth. The chapter concludes that Luxembourg’s present boom is likely to persist during the next few years, but mechanical extrapolations of Luxembourg’s fast-paced growth to the longer term would be fraught with considerable downside risks.

6. The financial sector is Luxembourg’s uncontested growth engine. As a consequence, ensuring a sound and stable regulatory environment for the mainly foreign-owned financial sector is a prime concern of public policy. Chapter IV reviews how standards and best practices on cross-border supervision have evolved since the early 1970s, describes Luxembourg’s current approach to supervision, and discusses the merits of alternative supervision arrangements.

I. Why is Luxembourg Growing So Fast?1

7. Luxembourg’s growth performance during the 1980s and 1990s was impressive. GDP and employment growth almost consistently exceeded by large margins the respective growth rates in the EU—the cumulative GDP growth differential in favor of Luxembourg has mushroomed to some 50 percentage points since 1980 (Figure 1-1). This chapter takes up two issues: First, what are the sources of Luxembourg’s fast-paced growth since the early 1980s? And second, what are the prospects for longer-run growth to continue at status quo rates?

9. These stylized facts—regional specialization of production, high labor mobility, export-propelled growth, and the dominance of regional growth fluctuations—appear to be the hallmarks of other regional “success stories” within industrial countries:

10. Regional booms appear to involve two broad phases of development: first, a growth take-off phase, usually spurred by singular historical events or coincidences; and second, a self-reinforcing growth phase fueled by Marshallian locational external economies6 and sustained by a sound policy environment. After an initial agglomeration of production in a particular geographic area—in many cases the result of historical accidents—static external economies underpinned by labor and capital mobility unleash a self-reinforcing process of cumulative causation that leads to the specialization of the area in particular activities.7 Once a critical mass has been achieved, dynamic external economies arising from knowledge spillovers between related activities, thick labor markets in specialized skills, and backward and forward linkages among producers, tend to lock in fast-paced growth.

11. Turning to Luxembourg’s particular experience, the growth take-off phase was, ironically, initiated by a severe crisis of its steel industry in the early 1970s, when the demand for steel products declined significantly owing to a generalized crisis in heavy industries and increased competition from the newly industrialized economies. Alongside a swift restructuring of the steel industry, Luxembourg transformed itself into a specialized service economy concentrating on financial services targeted mainly to the European market. Several factors helped foster an auspicious setting for the initial agglomeration of a financial service industry in Luxembourg:

12. Once locational external economies interacted with the initial agglomeration of resources, a highly mobile supply of labor from neighboring regions provided the necessary factor input to sustain Luxembourg’s regional boom. As the financial sector expanded, dynamic external economies arising from the accumulation of specialized knowledge also entered the picture, supporting continued fast-paced growth even as regulatory and tax advantages—such as the absence of reserve requirements—were being trimmed as a consequence of ongoing European integration.

13. At the same time, Luxembourg has persevered in its efforts to provide a favorable regulatory environment for specialized financial services. Recent measures include (i) legislation for mortgage banking that is more flexible than that in Germany (the Luxembourg legislation allows for the securitization of mortgages from all OECD countries); (ii) a flexible regulatory system for international pension funds that can accommodate funded pension schemes based on defined-contribution or defined-benefit principles; and (iii) a (pending) framework law for E-commerce and Internet banking.

14. Ongoing economic integration in the EU following the advent of Stage 3 of EMU is likely to further reinforce specialization. In addition, economic theory suggests that the removal of tax and regulatory advantages and competition from nascent financial centers are unlikely to dent Luxembourg’s growth performance, at least in the short run.

15. The longer-term outlook for continued fast-paced growth is less assured, however, as technological innovations and sudden changes in preferences can undermine patterns of regional specialization. Moreover, a regional crisis can be reinforcing: in the same way that labor moves to a region experiencing a boom, labor can move away from a region experiencing a slump—particularly so if, as in Luxembourg’s case, the regional boom was accommodated by large inflows of cross-border workers.

16. In this respect, the case of the U.S. state of Massachusetts has often been cited as a vivid example of a sudden reversal of a region’s economic growth fortunes.8 With production highly concentrated in high technology sectors, such as mini-computers and precision military hardware, the region enjoyed a period of rapid expansion in the 1980s. However, toward the end of the 1990s, demand shifted away from products produced in Massachusetts, and employment plummeted (Figure 1-4). Within three years almost 20,000 jobs were lost (about 6 percent of the 1988 level) and the unemployment rate quadrupled, and it was not until 1996 that Massachusetts recovered to its 1988 level of employment.

17. Against this background, the main policy challenge for Luxembourg is to devise institutions that help bolster the robustness of the economy and the public finances to prolonged economic downturns that may involve massive reversals of employment growth. In this context, two institutional arrangements in Luxembourg warrant particular attention; (i) the large-scale pay-as-you-go (PAYG) social insurance system, which is largely undiversified and, as a consequence, sensitive to economic reversals—this issue is taken up in Chapter II; and (ii) the labor market institutions, which are relatively rigid but have performed well in an environment of buoyant growth—this issue is taken up in Chapter III.

18. Luxembourg’s growth experience during the last 20 years may also shed light on the possible evolution and policy issues for EU regions. Luxembourg appears to represent an early example (within the EU) of regional specialization of production in an environment of high labor mobility. As EU countries integrate further, such regional specialization patterns will likely become more widespread, and large and persistent growth rate disparities among regions could become more common. At least for the smaller EU countries, this could raise labor market and social insurance design issues that broadly echo the ones faced by Luxembourg.

Luxembourg’s main steel producer, ARBED, remains one of the largest steel companies in the world, although most steel production now takes place outside Luxembourg.

Some 20 percent of all cross-border workers in the EU work in Luxembourg.

In contrast to real GDP growth, the cyclical coherence between Luxembourg’s and the EU’s employment growth series remained strong during the 1980s and 1990s (Figure 1-1).

An extreme example is the northern Italian town of Sassuolo which, with some 100 small firms, accounts for 60 percent of the world market in ceramic tiles.

Regional Employment Growth in Spain and the United States 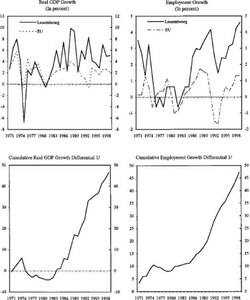 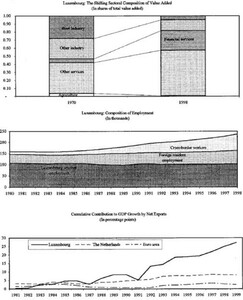 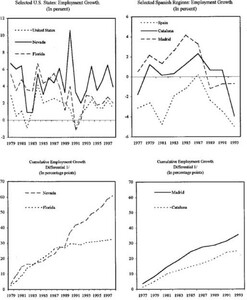 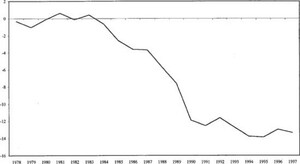