Thailand’s export growth, which had been very strong during 1985-95, fell sharply ahead of the crisis, mainly reflecting declining competitiveness, but also structural factors. Currency depreciation associated with the crisis has helped restore competitiveness and export growth. However, looking ahead, structural bottlenecks will need to be resolved if exports are to remain an engine of growth.

A. Export Performance Before the Crisis

114. The years of high economic growth in Thailand were also associated with rapid export growth. In the period 1985-95, Thailand’s exports grew on average by 23 percent per year. For much of this time, Thai export growth exceeded the average of its regional competitors (Indonesia, Korea, Malaysia, and the Philippines). Manufactured exports grew particularly strongly, partly reflecting rising foreign direct investment in this area (as more advanced Asian economies—Japan, Taiwan Province of China (POC), and Singapore—transferred the production of lower end manufactured goods). However, rapid export growth came to an abrupt halt in 1996—the first warning sign that the Thai economy was vulnerable to a disruption. Export growth in 1996 turned negative in both value and volume terms, falling across the board, but especially hard for exports to Japan.

115. The main factors behind the fall in exports in 1996 were declining competitiveness and slower demand growth in partner countries. A key factor was exchange rate appreciation starting in early 1995. With the currency effectively pegged to the (appreciating) U.S. dollar, the baht appreciated by 8½ percent in real effective terms between end-1994 and end-1996 (Figure 1). Indeed, insofar as the weights used to calculate the real effective rate were somewhat dated, the real appreciation was probably greater than suggested by the standard index. In particular, the baht’s gradual depreciation vis-a-vis the Japanese yen was sharply reversed—and that at a particularly inopportune time, given the economic weakness in Japan. Thus competitiveness was lost in a major export market, accounting for almost one-fifth of Thai exports. Using estimated elasticities, roughly two-thirds of the 15 percent slowdown in the growth of non-oil exports can be attributed to demand and price factors.

116. However, structural factors also played a role in the export slowdown, including slow adjustment toward more capital-intensive and high-end products. On the low end, Thailand lost market share in labor-intensive products, such as garments and footwear, to lower-wage countries within Asia, including China and India.2 As a result, the volume of labor-intensive exports declined by 21 percent in 1996. Meanwhile, higher technology products such as computers and parts, and electric motors (mostly SITC group 7 products), faced increasing competition from Korea. Singapore. Taiwan POC. Malaysia and Hong Kong. Export volumes for these goods fell 8 percent in 1996. Greater competition from other Asian economies partly reflected a greater convergence in export structures. By 1994-95, the export structures of Korea, Malaysia, and Thailand (and, to a lesser extent, the Philippines) were broadly similar. Thus, goods accounting for over 50 percent of Thai exports (at the three-digit SITC level) were also produced by regional competitors.

B. Export Performance in the Post-Crisis Period

117. The large depreciation of the baht led to an increase in export volumes. In the aftermath of the crisis, Thailand’s real effective exchange rate depreciated by 35 percent in the second half of 1997, but subsequently recovered. Export volumes responded by increasing 8-9 percent in each of 1997 and 1998, despite a sharp drop in partner country demand. The impact of the real exchange rate depreciation is most visible for labor intensive products, which saw an improvement in competitiveness relative to other markets producing low-tech products. As a result, the volume growth of labor-intensive exports improved from minus 6 percent in 1996 to plus 4 percent in 1998.

118. Nevertheless, three factors dampened the impact of the baht’s depreciation:

119. Overall, Thailand has gained market share since the crisis, and its export performance has kept pace with other Asian crisis countries. From 1997 through September 1999, export volumes rose 7 percent faster than the increase in world trade volumes. On average, Thai exports performed better than those of advanced countries, with export volumes growing about twice as fast as the average of developing countries. However, in nominal terms, Thailand’s market share shrank marginally during the same period, reflecting the decline in its export prices. Relative to other crisis countries, export value growth since the second quarter of 1997 is comparable to that in Korea and Malaysia. The Philippines, however, has outperformed all other countries, reflecting its relatively large share of exports to the U.S. (which rose from 32 percent of exports in 1996 to more than 50 percent of exports by the first half of 1999), as well as its high concentration of electronics sector exports.

At the time, many observers attributed the loss in competitiveness to the 1994 devaluation by China. On a trade-weighted basis, however, the impact appears small, since the majority of Chinese trade had already been taking place at the (more depreciated) market, rather than official, rate.

As of end-1999, the cumulative real effective depreciation was 25 percent.

The INS-based real effective exchange rate captures this effect, but perhaps only partially, as the weights used in its construction are based on trade patterns dating to the early 1990s (when third-country competition among the regional competitors may have been smaller).

For example, nearly 20 percent of Thai exports were destined for Japan in 1995, as compared to just 6-8 percent in Korea, Malaysia, and the Philippines.

Export Structure by Main Categoy As percent of total exports 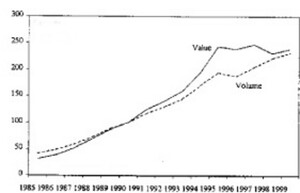 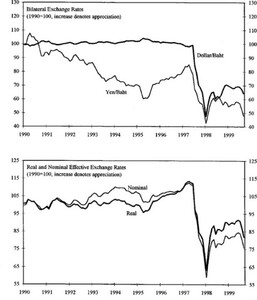 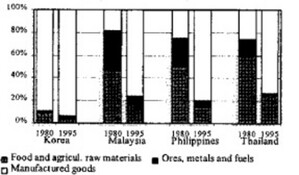 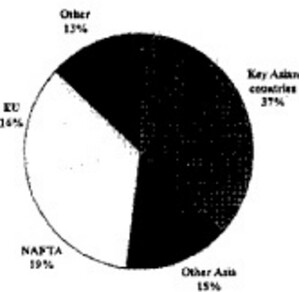