I. Inflationary Implications of EMU-Related Monetary Easing: An Econometric Estimate3

7. The gradual convergence of interest rates in Greece to those in EMU countries and the prospective depreciation of the drachma to its ERM2 central parity imply a substantial easing of monetary conditions, which, with the Greek economy operating fairly close to potential, is likely to have an appreciable inflationary impact. In this chapter, an econometric estimate of the influences on inflation in Greece is used to assess the likely magnitude of this impact. The chapter also provides, as an illustrative exercise, an estimate of the size of the required fiscal offset in the absence of other anti-inflationary steps (notably structural reforms that enhance competition).

8. Inflation is assumed to depend on four quarterly lags of the following five variables: past inflation, the real short-term interest rate differential with Germany, and the growth rates of industrial production, nominal wages, and the nominal effective exchange rate. The estimation uses quarterly data from the beginning of 1987 to the end of 1998; the early part of the sample marks the beginning of financial liberalization in Greece, and also the period when the exchange rate became an increasingly important intermediate target for monetary policy.4 Industrial production is used because GDP data are not available at a quarterly frequency, while the interest rate is the rate on bank deposits (which is linked to the short-term rate), since long-term rates and interbank rates are not available for Greece over the entire sample period. The real interest rate is computed by subtracting a measure of expected inflation from the nominal rate, where expected inflation is taken as the predicted values of a regression of inflation on eight quarterly lags of inflation. The real rate for Germany is obtained by subtracting actual inflation from the nominal short-term interest rate on three-month treasury bills.

9. The model is a vector autoregression (VAR) with identifying restrictions on the contemporaneous interactions of the variables. This is a structural VAR of the type pioneered by Bernanke (1986) and Sims (1986), in which the interactions of the five variables are taken into account in determining the effect of shocks to any of the variables on the others. For example, increased activity affects inflation, wages, and the exchange rate within the quarter, and then these have second-round effects on other variables both within the quarter and in subsequent quarters. But activity is assumed to respond to the four other variables only with a one quarter lag, reflecting the relative fixity of production plans. Inflation in the current quarter is affected directly by activity, wages, and the exchange rate, with a one quarter delay before shocks to interest rates affect inflation, reflecting the lag in the transmission of monetary policy to the economy. Current quarter wage growth is affected only by activity—this connection is strongly indicated in the estimation and presumably stems from the immediate effect of increased demand on overtime and thus on compensation (data on wages reflect total labor compensation). Reflecting the annualized system of wage bargaining in Greece, the other variables, including inflation, affect wages with a lag. In setting short-term interest rates, the monetary authorities of course have information on exchange rates at all times so that the real interest rate responds to exchange rates within the quarter, but is affected by the other variables only with a lag. Finally, although one would expect the nominal exchange rate to be directly affected by activity, inflation, and interest rates within the quarter, these effects are strongly rejected by the data (this possibly reflects use of the exchange rate as an intermediate target for policy); instead, nominal exchange rates are found to be affected only by activity within the quarter. Of course, allowing contemporaneous effects of activity, inflation, or interest rates on exchange rates hardly changes the results, since these coefficients are not statistically different from zero.

10. The table below summarizes these restrictions and provides the estimated coefficients for the contemporaneous effect of a shock to a variable (columns) on each of the five variables (rows); these are the effects of changes that occur within the same quarter as a shock. The effect of a shock to a variable on itself is of course equal to 1, while the term “Lag” indicates that the contemporaneous effect is set to zero. Figure 1 shows the response of inflation over a 10-year horizon to one percentage point changes in the other variables; this is the dynamic impact of the effects in the table below worked out over time, allowing also for the consequences of changes in the lagged variables (the coefficients for which are not shown). For example, the table below shows that the direct effect of a shock to activity is to reduce inflation, presumably because productivity rises procyclically with activity. But higher activity raises wages and this feeds through to inflation, so that inflation rises by the third quarter following the shock to activity (as may be seen in Figure 1). Reflecting the effective indexation of wages through the play of catch-up clauses, Figure 1 shows a rapid passthrough of increased wages to inflation, with an essentially one-to-one relationship between wage growth and inflation about six quarters after an unexpected change in wages. However, recent disinflation in Greece has been aided by a notable moderation in wage settlements, so that it is possible that this effect will be attenuated in the future compared to the econometric results obtained from historical data. Since the wage-price link accounts for much of the persistence of higher inflation in response to shocks, this suggests that future shocks could lead to less inflation—this is a potentially significant development that cannot, however, yet be tested empirically.

14. Additional fiscal consolidation is a clear policy option to help ensure that inflation remains low after Greece enters EMU. The results of the econometric model indicate that a one percentage point increase in industrial production leads to an increased 12-month inflation rate of about 0.3 percentage points after two years. With a fiscal multiplier of 1.5, and assuming that the response of inflation to changes in industrial production is a reasonable proxy for the response to aggregate income, this means that a cumulative fiscal contraction equal to 3.1 percent of GDP would be needed by 2002 to counter the 1.4 percentage point inflationary consequence of the monetary easing implied by convergence. Further effort would then be required to offset the inflationary effects that result in the third year after the easing.

15. As noted above, however, it is possible that the moderation of wage-setting behavior in recent years will lead to less persistence and smaller inflationary effects from the monetary easing implied by interest rate and exchange rate convergence than that estimated here on the basis of historical relationships. On balance, recent changes in the Greek economy would suggest that the size of the fiscal contraction noted above is probably an overly conservative (that is, too high) estimate of the tightening required to offset the inflationary implications of convergence. Moreover, the disinflationary effort will need to rely also on structural reforms that increase productivity growth. Reforms that enhance competition in product markets would tend to lower the level of prices in the affected industries, and thus lower inflation over the period of this adjustment. Measures that enhance the efficiency of production, including measures that promote the efficiency of service industries, would alleviate capacity constraints that give rise to inflationary pressures. In sum, a menu of instruments and reforms would best allow Greece to offset the inflationary consequences of the monetary easing implied by EMU convergence.

This topic has also been a focus of previous investigation by Fund staff. See “Post-devaluation Inflation Prospects: An Empirical Investigation,” in Greece: Selected Issues, IMF Staff Country Report No. 98/100, September 1998.

A direct empirical investigation for Greece is severely hampered by data deficiencies.

Greece; Response of Inflation to Shocks 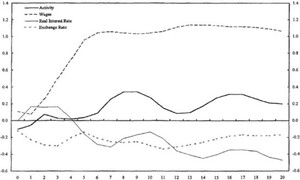