This paper provides a brief overview of the causes of the poor economic performance of Japan in the 1990s, and a more detailed analysis of developments in the real sector during 1999. The paper highlights that the collapse of the asset price bubble in 1990–91 provided the trigger for the downturn in 1992, and compounded the economic problems thereafter through its effects on the banking system. This paper also analyzes the fiscal policy developments and the monetary developments in Japan.

This paper provides a brief overview of the causes of the poor economic performance of Japan in the 1990s, and a more detailed analysis of developments in the real sector during 1999. The paper highlights that the collapse of the asset price bubble in 1990–91 provided the trigger for the downturn in 1992, and compounded the economic problems thereafter through its effects on the banking system. This paper also analyzes the fiscal policy developments and the monetary developments in Japan.

1. Structural reform and deregulation have been actively pursued since the Hosokawa government in 1993, reflecting an increasing awareness of the role that structural factors can play in improving the economy’s performance. The Government has implemented a series of deregulation packages, including the two three-year deregulation initiatives (1995–97 and 1998–2000), several economic stimulus packages which included elimination of remaining measures, and the “big bang” initiative to liberalize financial markets, including restrictions on foreign exchange transactions. In addition, the Administrative Reform Act was enacted in 1998, outlining a plan to improve the efficiency of the government, including the reduction in the numbers of ministries and agencies from the current 22 to 13 by 2000. Moreover, the Economic Strategic Council, which was formed in 1998 at the initiative of Prime Minister Obuchi, submitted a set of proposals for broader structural reform for the next 10 years to the Prime Minister in March 1999.

2. Particular progress has been made in deregulation and structural reform in financial services, telecommunications, and retail sales. In addition, there has been a slow but steady shift toward making regulatory practices more transparent and shifting from ex ante approval to ex post monitoring of compliance within general rules. Several institutions, including the Economic Planning Agency (EPA), the Ministry of International Trade and Industry (MITI), and the OECD have concluded that there have been significant benefits for consumers.2

3. Notwithstanding these successes, a recent OECD report concluded that the deregulation process in Japan appears to have been largely ineffective, with markets remaining distorted and uncompetitive and foreign participation continuing to be discouraged. The report concludes that too much emphasis has been placed on reducing specific regulations rather than comprehensive overall plans, implying that deregulation has been piecemeal and episodic (Box V.1). An important exception has been the recent “big bang” reforms of the financial industry, where a comprehensive reform initiative is leading to significant structural changes.

Recent analysis of regulatory reforms in Japan by the OECD concludes that the process has been largely ineffective. While considerable progress has been made in deregulation and structural reform, there is a concern that regulatory reform has been too episodic, slow, and incomplete to contribute significantly to strong sustainable economic growth, The OECD review reached the following main conclusions:

4. Over the past year, continuing progress has been made in deregulation and structural reform. A number of regulations have been relaxed or abolished, in line with the second three-year deregulation plan for FY1998–2000 and the “big bang” initiative. Major items included the abolition of minimum prices for international air fares, relaxation of geographic restrictions for truck services, and permission for private nursing care companies to operate.

5. As part of the “big bang” initiative, foreign exchange transactions were almost entirely deregulated in April 1998.3 The progressive liberalization of the foreign exchange regime has been a significant component of Japan’s deregulation over the last 20 years, as is documented in Table V.1. This process culminated in the general liberalization of foreign exchange transactions in April 1998 contained in the Foreign Exchange Law. More specifically, the Foreign Exchange Law included the following measures:

Foreign Exchange Liberalization During the 1980s and 1990s

Foreign Exchange Liberalization During the 1980s and 1990s

7. The progressive liberalization of foreign exchange restrictions since 1980 has been associated with a gradual increase in holdings of international assets and liabilities. As seen in Figure V.1, portfolio investment by domestic residents rose tenfold as a ratio to GDP, from around 2 percentage points of GDP in 1980 to over 20 percentage points by 1990. There were also less dramatic increases in other investment (mainly bank loans) and outward FDI. While some of this expansion may have reflected the impact of the domestic bubble economy—the ratios dipped somewhat in the early 1990s—renewed liberalization measures appear to have spurred a fresh increase in the ratio of foreign assets to GDP after 1995. Foreign liabilities have followed a similar path, although the changes, particularly as regards the portfolio investment ratio, are smaller.

8. However, Japanese portfolios remain relatively undiversified internationally. An estimate by a private analyst (Fujii, 1997) indicates that the ratio of foreign assets in total household securities holdings at end-1996 (including indirect holdings through institutional investors) was 5.2 percent for Japan, compared to 9.2 percent for the United Kingdom and 9.9 percent for Italy. Given this low level of international diversification, it appears likely that the ratio of assets and liabilities to GDP will both increase over the next few years, and that Japanese rates of return will gradually converge with those in the rest of the world.

9. The April 1998 liberalization did not cause the rapid outpouring of domestic savings into foreign assets that some had feared. The liberalization appears to be having the kind of gradual impact on foreign assets and liabilities seen in the wake of earlier measures in the 1980s and mid-1990s, rather than an immediate and swift change in portfolio allocations. However, the liberalization does appear to have led to a wider group of purchases of foreign securities, with rapid increases in the amount of foreign assets held by the Postal Saving and Postal Life Insurance systems, certain trusts, and private pension plans (Table V.2).5 In addition, it remains possible that more open international capital markets could interact with other financial changes to generate significant short-term shifts in international asset allocations flows in the future. In particular, if large amounts of the high yielding long-term deposits currently in the postal saving system but coming due by the end of 2001 are switched to other assets, this could result in a significant outflow of capital abroad over the next two years.

10. Turning to domestic measures, the Deregulation Committee, which reports directly to the Prime Minister, revised the three-year deregulation plan for FY1998–2000 at the end of March 1999.6 A further 292 items were added to the original 634 items, largely aimed at switching prior approval to ex post checking of compliance with regulations and encouraging new entry into various business fields. Major additions include:

11. A deregulation strategy the next 10 years has been produced by the Economic Strategy Council (ESC). The ESC was established in August 1998 at the behest of the Prime Minister. The ESC, comprising 10 business leaders and academics, released its report at the end of February 1999, which included 234 proposals, and presented a list of laws that need to be revised.

13. In June 1999, the government announced a package of measures designed to support employment and assist corporate restructuring. The measures relating to corporate restructuring were guided by the recommendations by the Industrial Competitiveness Council, which was established in March 1999 and consists of ministers and business leaders, mainly from Keidanren (business association), as well as recommendations from a MITI report published in late January and the ESC’s report. The package is being funded by a supplementary budget of around ¥520 billion (0.1 percent of GDP), already approved by the lower house. The main elements of the package are:

14. Plans for the reorganization of government are also moving forward. The Diet has passed most of the bills needed to reorganize the national government by reducing the number of ministries and agencies from 22 to 13, and slimming down the bureaucracy. The plans build on a basic government reform law enacted last year whose provisions included integrating the Construction and Transport ministries and the National Land and Hokkaido Development agencies into one ministry, and merging the Postal and Home Affairs ministries and the Management and Coordination Agency to form another new ministry. The maximum number of national government employees is expected to be reduced by one-quarter over the 10-year period beginning in fiscal 2000.

This chapter was prepared by Ichiro Oishi.

Empirical estimates of these benefits are discussed in Oishi and Towe (1998) in last year’s Selected Issues paper.

General progress on the “big bang” is reviewed in Chapter IV.

Before April 1998, only lending or borrowing between residents and nonresidents of below ¥100 million had been permitted without authorization.

The very small proportion of foreign assets directly held by households (0.4 percent) is another striking feature of Table V.2.

The mandate of the Deregulation Committee (renamed the Regulatory Reform Committee in April 1999) was widened in early 1999 to include assisting in the transition from a regulatory system of prior approval to ex post checking of compliance with rules.

Bankruptcy reform is discussed in Chapter VI by Levy in the accompanying Selected Issues. 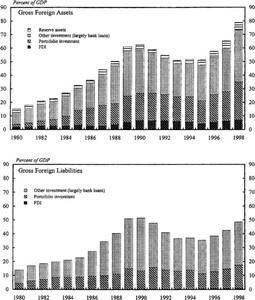