This 1999 Article IV Consultation highlights that progress on structural reforms in Haiti in FY1998/99 has been mixed. In the financial sector, the central bank’s supervisory capacity and the regulatory framework continued to be strengthened. Performance under the FY1997/98 Staff-Monitored Program (year ending in September) was satisfactory. As a result of firm policy implementation, inflation was reduced, the external current account deficit narrowed, and official net international reserves rose. Output growth picked up to about 3 percent. Credit policy was tighter than programmed, although the fiscal deficit was slightly higher than in the program.

This 1999 Article IV Consultation highlights that progress on structural reforms in Haiti in FY1998/99 has been mixed. In the financial sector, the central bank’s supervisory capacity and the regulatory framework continued to be strengthened. Performance under the FY1997/98 Staff-Monitored Program (year ending in September) was satisfactory. As a result of firm policy implementation, inflation was reduced, the external current account deficit narrowed, and official net international reserves rose. Output growth picked up to about 3 percent. Credit policy was tighter than programmed, although the fiscal deficit was slightly higher than in the program.

On September 3, 1999, the Executive Board concluded the Article IV consultation with Haiti.1

The administration that took office in March 1996 began implementing a three-year economic program in October 1996, with substantial international financial and technical support, including an ESAF arrangement from the IMF. The program went off course following the onset of a political crisis in the spring of 1997, which led to the resignation of the prime minister and adversely affected the implementation of structural reforms and the disbursement of external aid flows, all of which have constrained growth and efforts to reduce poverty. While attempts to reach a political settlement continued, the Fund has been monitoring Haiti’s economic policies through staff-monitored programs (SMPs). The main purposes of the SMPs are to assist in maintaining sound macroeconomic policies and advancing in the structural area, so as to facilitate the disbursement of some external budget support and establish a track record that could help restart Fund support through an ESAF arrangement once parliamentary elections (planned for late 1999) are completed.

Performance under the FY 1997/98 SMP (year ending in September) was satisfactory. As a result of firm policy implementation, inflation was reduced, the external current account deficit narrowed, and official net international reserves rose. Output growth picked up to about 3 percent. Credit policy was tighter than programmed, while the fiscal deficit was slightly higher than in the program. Although structural reforms covering the civil service and the financial system were undertaken, the political crisis prevented the adoption of reforms in the areas of taxation and infrastructure improvement.

The FY 1998/99 SMP takes into account the negative economic effects of Hurricane Georges, which struck Haiti in September 1998. It assumes output growth of about 2 percent and aims at containing inflation at 8 percent. The program limits the central government budget deficit to 1.7 percent of GDP (1.3 percent in 1997/98) and incorporates public sector expenditure to repair the hurricane damage, as well as to cover the cost of downsizing public employment.

Macroeconomic performance during the first three quarters of FY 1998/99 has been broadly in line with expectations. The 12-month rate of inflation was 8.1 percent in June 1999, while economic activity has slowed as anticipated as a result of the effects of the hurricane on agricultural output. The main source of growth continues to be the strong expansion of exports (mainly from the textile assembly sector). The central government deficit was 0.4 percent of GDP in the first three quarters of FY 1998/99, compared with 1.2 percent of GDP envisaged in the program as revenues were higher and capital and wage expenditures were lower than projected. Monetary policy was also tighter than programmed, and net official reserves rose by US$32 million, compared with the loss that was envisaged. All quantitative benchmarks of the SMP for June 1999 were met with ample margins.

Progress on structural reforms in FY 1998/99 has been mixed. In the financial sector, the central bank’s supervisory capacity and the regulatory framework continued to be strengthened. Also a plan for restructuring an insolvent state-owned bank (BNC) was submitted to the government by the restructuring committee in May, and began to be implemented in August. In public expenditure management, procedures to restrict the use of the ministerial discretionary accounts were applied in nearly all ministries by May 1; these procedures have been effective in reducing discretionary spending. On strengthening tax administration, customs was authorized to collect the vehicle registration tax at the time of importation (rather than at the time of sale). Also in May the prime minister approved the sale of a 65 percent share in the Haitian Cement Plant, which had been awaiting signature since December 1997. However, progress in restructuring and privatizing other public enterprises has been slow and insufficient support has been given to bolstering operations of the large taxpayer unit. Most importantly, little progress has been made in strengthening the judiciary, which is critical to improving security.

Executive Directors commended the authorities for maintaining macroeconomic stability during the past year, notwithstanding the very difficult political environment, and the economic impact of the damage inflicted by Hurricane Georges. Inflation and the fiscal deficit had been kept under control, while official reserves had risen.

However, Directors continued to voice their concern about the effects of the political impasse on external assistance, investment, and the implementation of structural reforms. This had constrained growth and stood in the way of efforts to reduce poverty. In these circumstances, Directors strongly supported the government’s intention to carry out transparent and democratic parliamentary elections before the end of 1999 as an urgent priority. They noted that a functioning parliament was essential to approve the budget and external loans that had already been negotiated, and to enact important pieces of legislation, including on the justice system and the financial sector.

Directors emphasized that the key issue in the short term is to maintain macroeconomic stability, while seeking to finance the cost of the elections in a noninflationary way. They stressed that the government will need to continue to resist pressures for wage increases and hiring in the run-up to elections and to adhere strictly to the cash management system in order to achieve the fiscal target. In this regard, they encouraged the authorities to continue to implement procedures for limiting spending to revenue collection and programmed financing, and to step up actions to improve tax and customs administration and tighten control of exemptions.

Haiti’s balance of payments position will remain highly dependent on official grants and loans, and Directors emphasized the importance of maintaining a floating exchange rate and of implementing key structural reform measures aimed at reducing domestic production costs and enhancing the economy’s competitiveness. Directors welcomed the authorities’ intention to maintain a relatively open trade regime and their efforts toward promoting cooperation with their CARICOM partners.

Directors urged the authorities and the political parties to make strenuous efforts toward a political settlement that would allow rapid progress in restructuring and privatization of the port, airport, and telephone and electricity companies; the approval of legislation for reforms at the ministries of justice, health and education; and reforms of direct taxes, tax exemptions, and the investment and commercial codes. They noted that all of these measures were important for raising investment, especially in the priority social sectors. In view of Haiti’s resource constraints, Directors emphasized the need to mobilize technical assistance, from the Fund and other sources, to help in the implementation of structural reforms.

Directors welcomed the authorities’ request for a follow-up staff-monitored program (SMP) that would help them maintain monetary and fiscal discipline during the electoral period. They stressed that continued implementation of the SMP would be expected to help mobilize donor support and facilitate an early start to discussions on a program that could be supported by a new ESAF arrangement.

Directors welcomed the authorities’ intention to participate in the pilot project for the publication of Article IV consultation reports.

Public Information Notices (PINs) are issued, (i) at the request of a member country, following the conclusion of the Article IV consultation for countries seeking to make known the views of the IMF to the public. This action is intended to strengthen IMF surveillance over the economic policies of member countries by increasing the transparency of the IMF’s assessment of these policies; and (ii) following policy discussions in the Executive Board at the decision of the Board.

Sources: Bank of the Republic of Haiti; Ministry of Economy and Finance; and IMF staff estimates.

Sources: Bank of the Republic of Haiti; Ministry of Economy and Finance; and IMF staff estimates.
1

Under Article IV of the IMF’s Articles of Agreement, the IMF holds bilateral discussions with members, usually every year. A staff team visits the country, collects economic and financial information, and discusses with officials the country’s economic developments and policies. On return to headquarters, the staff prepares a report, which forms the basis for discussion by the Executive Board. At the conclusion of the discussion, the Managing Director, as Chairman of the Board, summarizes the views of Executive Directors, and this summary is transmitted to the country’s authorities. In this PIN, the main features of the Board’s discussion are described. 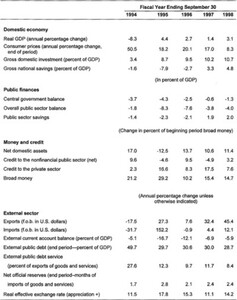 Sources: Bank of the Republic of Haiti; Ministry of Economy and Finance; and IMF staff estimates.