This Selected Issues paper reviews the main elements of the National Insurance Scheme (NIS) and the Family Allowance Scheme (FAS) in Norway and provides projections of future pension expenditures. All persons residing or working in Norway are insured under the NIS, and the system is financed on a pay-as-you-go basis through contributions and from general tax revenue. The paper demonstrates that indexing pensions to wages, in line with recent practice, would result in a large net liability by the year 2050, which could be reduced by indexing pensions instead to consumer prices.

This Selected Issues paper reviews the main elements of the National Insurance Scheme (NIS) and the Family Allowance Scheme (FAS) in Norway and provides projections of future pension expenditures. All persons residing or working in Norway are insured under the NIS, and the system is financed on a pay-as-you-go basis through contributions and from general tax revenue. The paper demonstrates that indexing pensions to wages, in line with recent practice, would result in a large net liability by the year 2050, which could be reduced by indexing pensions instead to consumer prices.

34. This note examines the implications of recent domestic and external developments for short- and long-run positions of the State Petroleum Fund (SPF). The SPF was established in 1990 as a means to promote a sustainable long-run fiscal position and to help maintain the competitiveness of the non-oil (“mainland”) economy in the face of significant oil export revenues.5 Since 1996 the Norwegian authorities have been transferring oil-related fiscal surpluses, averaging about 5 percent of GDP annually, to the SPF for investment in foreign assets. By end 1998 the value of SPF assets is expected to reach 15 percent of GDP. The rate of accumulation of assets in the SPF depends on the level of fiscal surpluses, the timing of transfers to the SPF, and the rate of return on investment. Beginning from 1998 the investment strategy of the SPF was broadened to include foreign equities in addition to bonds, and by June 1998 about 40 percent of the SPF was invested in equities.

The prospects for future accumulation of assets in the SPF were affected by a percent fall in oil prices between the fourth quarter of 1997 and end-November 1998, a isssessment of the profile of oil production and exports, turmoil in global financial markets, d trends in the non-oil fiscal position. Long-term prospects for the non-oil fiscal deficit have deteriorated, owing mainly to recently announced increases in old-age pension benefits and softening of eligibility requirements for early retirement.

36. Section B provides an assessment of the long-run fiscal position based on the approach of the Norwegian Ministry of Finance and on an alternative suggested by staff. Section C reviews recent changes in the investment strategy of the SPF and the impact of the recent global financial turmoil on returns on SPF investments. The process of asset accumulation and investment performance during 1998 are summarized in Section D.

B. Long-Term Prospects for the State Petroleum Fund

37. This section presents the staff’s baseline scenario and compares it with two alternative scenarios—the government’s budget scenario and a staff alternative. The staff’s baseline scenario is based on September 1998 WEO oil price assumptions through 2003 and incorporates the staff’s projections about pension expenditures and petroleum production. The price profile entails a partial recovery from recent world oil price levels over the medium term, but subsequently—consistent with the 1999 budget—oil prices are assumed to decline again to NKr 100 per barrel in 1999 kroner (about US$13.50) during 2004-2010 as a result of taxes or other measures adopted to implement the international agreement on carbon dioxide emissions. The tabulation below summarizes the assumptions and outlines the results for the staff’s baseline and alternative scenarios:

38. Oil revenues in both scenarios were based on the petroleum production profile of the Ministry of Finance (Figure 3). In line with recent government and operating company decisions, the oil production profile is now more back-loaded than had been assumed in 1996-97, thereby postponing some output into future years when oil prices are assumed to recover partially from current levels.

39. The projections for the non-oil fiscal position assume that the economy reaches its steady state in the long run, with revenues and expenditures constant as a share of GDP in 2003-2050. In line with the Ministry’s medium-term assumptions, as announced in the 1999 budget, the revenue/GDP ratio is also kept roughly constant in 2000-2002, but the growth of underlying expenditures is held to 1 percent per annum in real terms—about 1.3 percentage points less than the growth rate of real GDP.

40. The distinguishing feature between the staff’s baseline and alternative scenarios is the share of pensions in GDP, which effectively determines whether Norway could face a robust long-term fiscal position or a large fiscal imbalance. In the baseline scenario, reflecting government decisions to raise pension benefits and ease early retirement provisions—assuming that pension benefits would be indexed to wages in the long run—pension expenditures are projected to rise from the current level of 8.2 percent of GDP to 18.1 percent of GDP in 2050. While such a policy toward future increases in pension benefits would be consistent with decisions taken in recent years, it does not represent some immutable custom in Norway—until 1990, pension benefits had increased at a rate below the increase in wages. The alternative scenario illustrates a long-term fiscal outcome that might prevail if pensions were indexed instead to consumer prices, with the result that the pension expenditure/GDP ratio would only reach about 12.4 percent in 2050.

41. In the baseline scenario the overall fiscal surplus is projected to peak in 2003, and to turn into deficit in 2014 (Figure 4, Panel 1). The SPF assets would continue to rise until 2016, when they reach a peak of 105 percent of GDP, and decline thereafter until the depletion of the funds in 2038. Lower pension expenditures in the staffs alternative scenario would permit a sustainable long-run fiscal position, allowing the SPF to grow to a maximum of 123 percent in 2022 and then to decline gradually to just over 50 percent of GDP by 2050.

42. The government’s 1999 budget scenario assumes that additional fiscal adjustment will be carried out throughout the period, leaving the SPF with asset holdings of about 15 percent of GDP in 2050. The adjustments include the moderation of underlying expenditure growth in 2000-2002, as described above, and limitation of the growth of public sector employment to 0.5 percent per annum through 2030 (well below the annual average growth of 2½ percent over the last two decades). In addition to these adjustments, a combination of further expenditure and revenue measures are assumed to yield additional fiscal savings of about 3½ percent of GDP by 2050. Finally, the authorities’ estimate for pension expenditures is about 1 percent of GDP lower than the staff scenario over the long term.7

43. Apart from the SPF there are other net financial assets held by the public sector, totaling about 23 percent of GDP in 1995. These include net assets from a defunct government pension fund, assets held in the state banks and the valuation at cost of public enterprises. Earnings on these assets are another possible offset to the potential long-run deficit on other fiscal operations. Adding these to the SPF, the staffs baseline scenario would still show a net liability of 90 percent of GDP in 2050. Under the government’s 1999 budget scenario, the result would be a net asset position of about 70 percent of GDP (Figure 4, Panel 2). Net financial assets would be maintained at over 110 percent of GDP in the staffs alternative scenario, ensuring long-run fiscal sustainability.

C. Investment Strategy and Management of the SPF

44. Before 1998 all the assets of the SPF were invested in low-risk, interest-bearing financial instruments, such as bonds and bills, issued by foreign governments or highly rated international institutions. The currency composition of the SPF investment portfolio was defined by Norway’s import weights—about 75 percent of the Fund was invested in Europe, with one-third placed in Swedish and Danish assets.

45. In 1997 the authorities reviewed the guidelines for management, investment strategy, and currency distribution of the SPF’s investment portfolio. The government decided to diversify the currency composition, range of instruments, and geographical allocation of SPF assets. In the process the SPF was instructed to reduce its exposure to Europe from 75 percent to 50 percent, and to place 30-50 percent of its assets in “developed equity markets.” The latter decision was supported by evidence that the long-run rate of return on a portfolio containing both equities and fixed-income instruments is, on average, higher than the return on a fixed-income portfolio. The long-term investment horizon—the authorities do not expect to draw on the SPF until well after 2010—reduces risks associated with equity markets being more volatile than bond markets. The SPF investment in equities is limited to portfolio investment, with investments in individual companies not exceeding 1 percent of their share capital.

46. The intensified volatility of global financial markets in 1998 did not affect the decision of the authorities to invest part of the SPF in equities, and by June 1, 1998 the equity share had reached 40 percent of the total portfolio. The tabulation below presents the composition of the SPF portfolio as of June 1, 1998:

47. The SPF had only limited exposure to the financial crisis in Southeast Asia, and none in Russia or Latin America. Investment performance has been affected mainly by financial market developments in advanced economies, including Japan.

49. Part of the SPF is managed by external managers, closely monitored by Norges Bank. Most of the bond portfolio is managed by Norges Bank, with somewhat less than 1 percent (about NKr 750 million) managed externally by ABN AMRO Asset Management in London. The equity capital is being managed entirely by external managers—Bankers Trust Company, Barclays Global Investors Limited, Gartmore Investment Limited, and State Street United Kingdom Limited—which follow an indexing strategy. A small portion of the equity portfolio is to be placed under active management in the near futre; the process of selecting external managers for this portion is to be completed by end-1998.

50. All externally managed portfolios are monitored by Norges Bank on a daily basis, using information received electronically from Chase Manhattan Bank—the global custodian for SPF equity investments. Internally managed portfolios are monitored in a similar fashion on the basis of Norges Bank settlement and accounting data. The risk management system (BARRA) evaluates the deviation of the entire portfolio from the benchmark.

In percent of GDP

In percent of GDP

53. The return on SPF assets was much higher in the first half of 1998, but turned negative in the third quarter owing to the downturn in world equity markets. The combination of under-performance of the bond portfolio and higher actual equity holdings, compared with those of the benchmark portfolio, resulted in the actual return being 0.23 percentage point lower than the return on the benchmark portfolio.

Underlying expenditure is equal to total fiscal expenditure minus spending on petroleum activities, unemployment benefits, interest payments, support to shipyards, and refugees. The excluded categories presently account for about 12 percent of fiscal expenditure.

For details, see the background paper on “The Social Insurance System.” 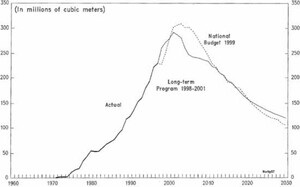 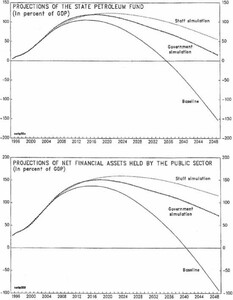