This Selected Issues paper on the United States analyzes problems in the measurement of output and prices. The paper examines income versus expenditure measures of national output. Sources of consumer price index and findings of the Boskin Commission are discussed, and mismeasurement of output and productivity is analyzed. Developments in productivity across industries in the United States are described. In particular, the paper focuses on the slowdown in aggregate productivity growth that began in the mid-1970s and examines whether this slowdown has continued in recent years and is common across industries.

This Selected Issues paper on the United States analyzes problems in the measurement of output and prices. The paper examines income versus expenditure measures of national output. Sources of consumer price index and findings of the Boskin Commission are discussed, and mismeasurement of output and productivity is analyzed. Developments in productivity across industries in the United States are described. In particular, the paper focuses on the slowdown in aggregate productivity growth that began in the mid-1970s and examines whether this slowdown has continued in recent years and is common across industries.

1. Stock market prices have risen sharply over the past two years, reaching all-time highs and raising concerns that “irrational exuberance has unduly escalated asset values.”2 With the rise in prices, price/earnings ratios have moved out of line with historic averages and dividend/price ratios (also referred to as dividend yields) have fallen to historic lows, suggesting that stock prices are high relative to economic fundamentals (Chart 1). To examine this question, a simple model explaining the dividend/price ratio in terms of fundamental factors was estimated, and the model’s ability to predict the movements in the dividend yield over the period 1995–96 was analyzed. One version of the model can account for most of the decline in the dividend yield over the last two years.

2. The dividend/price ratio reflects the market’s forecast of future dividend growth and risk premia.3 Thus, variables that either forecast future dividends or are related to risk premia should help explain changes in the dividend yield. In addition, substantial net purchases of mutual funds have taken place in the past few years. These mutual fond inflows may reflect a change in longer-term fundamentals that is not captured in the other economic variables. Hence, two models for the dividend yield are estimated: a basic version, and an augmented one that includes a measure for mutual fund inflows.

3. Research suggests that variables like the yield curve, real interest rates, inflation, and the default premium are related to future economic activity, discount rates, and risk premia.4 In the basic model, the log of the dividend yield (LDP) is related to the slope of the yield curve (YC) (which represents the difference between long-term and short-term interest rates); the default premium (DEF) (measured as the difference in yields on corporate and government bonds); the (ex-post) real rate of interest on three-month Treasury bills (RTB); and the CPI inflation rate (PI). In the augmented version of the model, net purchases of mutual funds (MUFT) from the Investment Company Institute is added as an explanatory variable.

4. For each version, a model was estimated with two lags of the log dividend yield and a contemporaneous value and two lags of each explanatory variable. Each model was fitted to the period March 1984 to December 1994.5 Forecasts were then derived from the two models for the period January 1995 to February 1997. The long-run version of each model is as follows (standard errors in parentheses):

6. A forecast attribution was performed using the augmented model. The intent was to measure how much each variable contributed to the change in the forecast, and by implication to estimate how important each variable was in explaining the actual decline in the dividend yield.9 T can explain only about he table below shows the forecast attributions. Most of the variables other than mutual-fund inflows have fairly low explanatory power in the forecast. The basic model, which excludes mutual fund inflows, can explain only about 15 percent of the decline in the log dividend yield, while the augmented model explains about 80 percent of the decline. In the augmented model, the mutual fund inflows variable explains nearly 75 percent of the change in the dividend yield.

7. The inflow of money into mutual funds may reflect a shift in portfolio allocations by individual investors. The development of mutual funds in recent years has made it easier for individuals to hold a diversified portfolio of stocks and has significantly lowered transactions costs. Historically, stock holdings have been highly concentrated among a relatively small number of wealthy households. More recently, however, more households have been participating in the stock market, particularly through mutual funds.10 The previously highly concentrated holdings of stocks could have depressed stock prices relative to what they would have been if holdings were more uniformly distributed.11 If the increase in mutual-fund in flows represents a shift of portfolios toward a less-concentrated allocation, then the recent rise in prices and decline in yields may represent a move to a different equilibrium, rather than a departure from equilibrium. Alternatively, if expectations of future returns on the scale of those experienced in the last two years have motivated recent inflows to mutual funds, then the evidence in this paper might be consistent with “irrational exuberance.”

For a complete explanation of the theoretical model used in this analysis and its empirical specification and estimation, see Kramer (1996).

These variables are often used in empirical studies of asset pricing, and they forecast dividend growth rates and stock returns out of sample.

The data on mutual-fund inflows are not available before 1984.

The coefficient and standard error for MUFI are multiplied by 104 for ease of presentation.

The forecasts presented here are dynamic forecasts, while those in Kramer (1996) are onestep-ahead static forecasts.

Such a phenomenon is consistent with the “equity premium puzzle” that historical stock returns have been too high to be consistent with standard equilibrium models (see Basak and Cuoco (1997)). 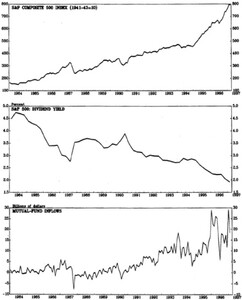 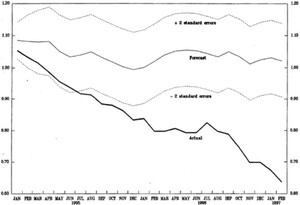 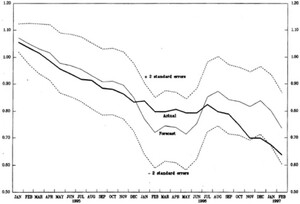