This paper reviews economic developments in Iceland during 1990–96. It analyzes the origins of the current economic expansion associated with a swing in the current account and in emerging inflation pressure. Three driving forces are emphasized: the positive supply shock affecting the fisheries; the expansion of the power intensive industry; and brisk increases in real wages over the past two years (1995–96). The paper highlights that the main sources of upside risks comprise the likely construction of a new aluminum smelter.

This paper reviews economic developments in Iceland during 1990–96. It analyzes the origins of the current economic expansion associated with a swing in the current account and in emerging inflation pressure. Three driving forces are emphasized: the positive supply shock affecting the fisheries; the expansion of the power intensive industry; and brisk increases in real wages over the past two years (1995–96). The paper highlights that the main sources of upside risks comprise the likely construction of a new aluminum smelter.

I. ORIGINS OF THE RECENT EXPANSION AND INFLATIONARY PRESSURES1

1. The expansion of economic activity in 1996 was spearheaded by a surge in domestic demand led by buoyant private consumption and investment. The National Economic Institute (NEI) estimates real GDP growth for 1996 at 5.5 percent, up from 2.1 percent in 19952; private consumption is estimated to have expanded 7 percent and investment 24 percent (Chart 1). Notwithstanding export growth at 5.2 percent the current account balance is estimated to have reversed its positive sign of recent years to a 1.8 percent deficit of GDP in 1996, reflecting a 12.8 percent rise in imports. Meanwhile, indicators suggest inflation is edging up following years of modest price increases; underpinned by domestic demand and rising import prices, inflation is estimated to have climbed to 2.3 percent in 1996 from 1.7 percent in 1996.

2. This section analyzes the origins of the current economic expansion associated with a swing in the current account and in emerging inflationary pressure. Three driving forces are emphasized: the positive supply shock affecting the fisheries; the expansion of the power intensive industry; and brisk increases in real wages over the past two years. Expectations of higher future incomes are buoyed by the performance in the fisheries and new investment in the aluminum industry prompting a surge in consumer and investment demand. The main sources of upside risks comprise the likely construction of a new aluminum smelter, and the outcome of the upcoming wage negotiations conducted in a new bargaining framework3.

3. Official projections for 1997, excluding construction of a new aluminum smelter, show economic activity slowing down. Helped by a leveling off of fisheries output and of consumption and investment, GDP growth is projected to decelerate to 2.5 percent, limiting the deterioration in the current account deficit to 2.9 percent of GDP. Consumer price inflation is projected to move lower to 2.0 percent, based on the assumption of a 3.5 percent wage rise. Staff projections for 1997 indicate a similar picture but are less optimistic about a slowdown in inflation and GDP, partly reflecting an assumption of a 5.0 percent wage increase, and GDP growth is projected at 3.0 percent, resulting in a current account deficit of 3.2 percent, and inflation is projected at 2.8 percent.

B. Real Sector Developments in 1996

4. Domestic demand rose 8.7 percent in 1996 and national income 4.9 percent, with consumption and investment providing the impetus for growth (Chart 1).

5. Consumption expanded briskly (7 percent) in 1996, making it the largest contributor to GDP growth. It was propelled by expectations about future income based on favorable shocks to the fisheries and investment in power intensive industry. Demand for consumer durables was particularly vigorous; annualized car imports were up almost 40 percent in August.

6. The surge in consumption was largely associated with strong growth of real disposable income by 5.5 percent in 1996 as a result of lower-than-expected inflation since the last general wage agreement in February 1995, increased employment, longer work hours and a lower tax burden. On top of a rise of 5 percent in 1995, this brings the increase in purchasing power to more than 10 percent over two years. Consumption in excess of the increase in disposable income was largely financed by build–up of household debt supported by a rise in consumer credit of 11.5 percent year-on-year in July. Consumption smoothing has been helped by financial market liberalization in recent years and is reflected in an 8.8 increase in consumer debt in 1996, which brings the debt ratio to 125 percent of GDP4. Lower interest rates in 1996 also contributed to higher consumption, particularly as consumer loans are primarily extended at floating rates.

7. Total fixed investment increased sharply by an estimated 24 percent during 1996, as reflected in movements in several indicators: imports of investment goods other than for the power intensive industry is up 23 percent during the first six months compared with the same period last year; cement sales rose 18 percent in the first eight months and housing starts strengthened. During the same period, the fishing industry recorded investment growth of 69 percent, the manufacturing sector 116 percent and the energy sector 38 percent.

8. Excluding the smelter expansion, total investment growth is still high at 15 percent, underpinned by increased business profits5 and strong domestic demand. Business investment is estimated to surge at 50 percent in 1996 with the two investment projects in the aluminum

smelter and the tunnel under Hvalfjordur accounting for 42 percent of the rise in investment. Public investment is estimated to have declined 1.8 percent in 1996 reflecting unchanged street and sewage construction and reduced investment in government buildings. Total investment growth has brought the investment–to–GDP ratio to a more comfortable level of 18.8 percent, up from 15.2 percent in 1995.

9. The current account balance reversed its positive trend of recent years, swinging from a surplus of 0.8 percent of GDP in 1995 to an estimated deficit of 1.8 percent in 1996. The main reason for this swing was the 12.8 percent estimated growth in imports (Chart 2). General merchandise imports, excluding ships and aircrafts (i.e., “special imports”), rose 11.1 percent in the first half of 1996 compared with 1995. Imports of cars and investment goods rose by 20-30 percent while the imports of other consumer goods and intermediate goods increased by 7 percent and 6 percent respectively. Special imports grew 8.4 percent in nominal terms in the first six months, with investment goods providing the impetus with a 57.3 percent hike.

10. Export growth, estimated at 5.2 percent in 1996, was largely driven by the fisheries with marine exports growing 16 percent in the first six months in 1996 over the same period in 1995 (Chart 2). All fisheries sectors encountered favorable export trends (with the largest increase of 92 percent in the fishmeal and herring factories).

11. Consumer prices are estimated to have climbed by 2.3 percent in 1996, up from 1.7 percent in 1995, reflecting strong domestic demand and increasing import prices (Chart 3). Annualized inflation stood at 2.5 percent in September, compared with increases of 1.5-2.0 percent early in 1996. The composition of price increases is uneven: the service component of the index has been rising at 4 percent year-on-year since April, nursed by dwindling slack in the labor market. Prices of imported goods showed an increase of 3.3 percent during the first nine months over the same period of 1995, underpinned by a higher-than-expected 3.9 percent rise in import prices and a small effective depreciation of the exchange rate. With the restraining influence of already favorable profit margins and subdued wage increases ahead of expiring wage contracts, prices of domestic consumer goods, excluding agricultural products, rose moderately by 1.5 percent (Chart 4).

12. Wages are expected to increase 11 percent over the period 1995 to 1996, supported by the general wage agreement in early 1995 (Chart 3). Meanwhile, unemployment is estimated to fall to 4.2 percent in 1996 from 5.0 percent in 1995, as a result of strong domestic activity.6 While historically still high, several factors suggest that the unemployment level compatible with price stability has moved higher in recent years. Consequently, the present economic upturn has brought the economy close to and likely slightly above its potential capacity7. These developments pose a threat to price stability as labor market conditions tighten and the upcoming wage negotiations, conducted in a new bargaining framework, may feed inflationary pressure. Comparison between the Statistical Bureau’s Wage Index for the private sector and the estimated changes in negotiated wages indicate a 1.7 percent and 1.5 percent wage drift for the first and second quarters of 1996 respectively, but slowing to 0.7 percent in the third quarter (Chart 4).

13. Monetary and asset price developments have been mixed (as discussed in more detail in Chapter V). On the one hand, monetary aggregates are expanding at a pace broadly consistent with price stability; currency and total deposits (M3) rose by 7 percent in 1996, mainly reflecting a portfolio shift into other assets. On the other hand, the hefty economic expansion is underpinned by vigorous consumer credit growth of above 10 percent and corporate lending of 7 percent. Yet, although in the Reykjavik area house prices appear to be edging up following a decline since the beginning of 1995, house prices have overall remained subdued. Meanwhile, the stock market has been bullish with stock prices rising on average 61 percent on expanding trading volumes in 1996.

14. Two major shocks had an important effect on activity and external balance in 1996. Following a contraction of 3 percent in 1995, marine production is estimated to rise 7 percent in 1996 resulting from an increase in cod quotas8 and favorable catches in distant waters. Fisheries represent some 15 percent of GDP, 12 percent of the labor force and 75 percent of export earnings. In the fall of 1995, a decision was taken to expand the capacity of the aluminum smelter in Straumsvik from 100,000 tones to 160,000 tones over 1996-97.

15. The directions of trends in output, investment and consumption, resulting from these two shocks are broadly consistent with intertemporal analysis of the current account deficit. Following a persistent positive supply shock, future output levels are expected to be higher by more than the size of the initial shock. Consumption smoothing behavior implies that the shock will cause an even larger increase in consumption. As a result, positive innovations tend to produce a current account deficit and lower savings rates (consumption initially rising more than output).

The surprising aspect of 1996 growth is demonstrated by the sharp upward revision of GDP from 2.4 percent in February.

The official baseline projections for 1997 are compared with preliminary estimates by NEI of the impact of a new aluminum smelter. The wage bargaining system is discussed in Annex II.

Household debt to the credit system has increased from about 20 percent of GDP in 1980 to 125 percent in 1996, amounting to ISK 314.7 billion with about 60 percent pertaining to the housing funds.

As a share of total valued added, business profits increased 3.5 percent in 1995 and are expected to stay the same this year, up from below 0.75 percent in 1992-93. Post-tax return on equity is estimated at about 6 percent for 1996.

Long-term unemployment, defined as a duration of six months or more, trended upward in 1996 standing for one third of all unemployed. In this regard, proposed changes to the law of Unemployment Benefits planned to take effect July 1, 1997 may prove instrumental. Important reforms include a limit on benefits not exceeding the former wage and each benefit period is extended from 1 to 5 years but to regain the right to benefits the unemployed must work for six months out of the last 12 months, in effect doing away with the possibility of continuously collecting benefits.

As recommended by the Marine Research Institute, fishing quotas in tons of cod equivalent were raised by 2 percent over last year.

For instance, in the early stages of negotiations, the Icelandic General and Transportation Workers’ Union was demanding a 16½ percent hike in monthly minimum wages.

Calmfors and Driffill, defining centralization as “the extent of inter-union and inter-employment cooperation in wage bargaining with the other side”, rank the other Nordic countries together with Austria as “centralized”. In the “intermediate” group, Germany and Australia are found among others, and notable “decentralized” systems are found in USA, UK and Japan.

Incentives for wage restraint are created when negative externalities of one group of wage earners are internalized.

The new legislation emanates from a tripartite commission, initially mandated to propose changes to the negotiating process and to issues related to work hours. Labor unions distanced themselves from the conclusions of the commission as further changes had been made by the Ministry of Social Affairs and by the parliament before the proposals were finally passed as a bill.

(Percent change for a year ago) 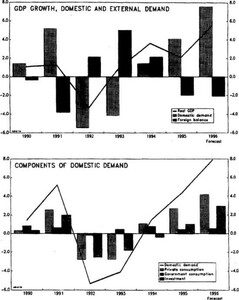 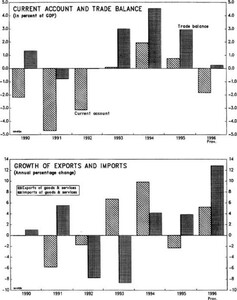 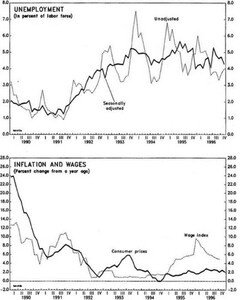 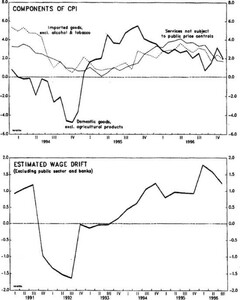