This paper reviews economic developments in the United States during 1992–96. The paper briefly describes improvements in the national income and product accounts (NIPA) and some of their implications for the analysis of long-term trends in U.S. investment and saving. The paper highlights that the effect of the 1990–92 recession on employment was considerably less severe than the effect of the 1981–82 recession. During the 1990–92 recession, employment fell by 1½ percent, compared with a drop of 3 percent during the 1981–82 recession.

This paper reviews economic developments in the United States during 1992–96. The paper briefly describes improvements in the national income and product accounts (NIPA) and some of their implications for the analysis of long-term trends in U.S. investment and saving. The paper highlights that the effect of the 1990–92 recession on employment was considerably less severe than the effect of the 1981–82 recession. During the 1990–92 recession, employment fell by 1½ percent, compared with a drop of 3 percent during the 1981–82 recession.

I. Trends in Investment and Saving

In January 1996, the Bureau of Economic Analysis (BEA) of the U.S. Department of Commerce released national income and product accounts (NIPA) data that incorporated a number of improvements over the previously featured series. The improvements included the use of chain-linked measures of real output and prices, better measures of capital depreciation, and the explicit recognition of public investment expenditures. This paper briefly describes these improvements and some of their implications for the analysis of long-term trends in U.S. investment and saving. While the new data incorporate some substantial revisions that are intended to provide a more accurate picture of economic developments, basic trends in saving and investment over the last few decades are broadly unchanged from those in the previous data. Section 2 describes the main changes to the NIPAs. Section 3 looks at trends in investment, and Section 4 examines saving trends.

2. Principal changes to the NIPA

It had been recognized for some time that BEA’s previous constant-dollar measures of real output were biased. 1/ These measures were constructed using fixed-weight price indexes to derive constant-dollar values for each component of GDP. As a result, GDP growth could be distorted in situations in which there are sharp differences in the evolution of the prices and quantities of major components. For example, a computer with performance equivalent to today’s typical desktop computer would have cost roughly as much as a car in 1987; hence, computers and cars would have received about the same weight in constant 1987-dollar GDP. However, computer prices have fallen dramatically in recent years, and the typical price of a desktop computer might be ⅕ to 1/10 of the price of a typical car. At the same time, the quantity of computers produced has risen dramatically. The combination of a large price weight and rapid real growth meant that in years after 1987 the weight given to growth in computers caused overall GDP growth to be overstated. Likewise, in years before 1987, computers were under-weighted and GDP growth was understated. The bias was larger in years farther from the base year. It was estimated that because of this bias, real GDP growth in 1995 was overstated by about 0.5 percentage point on an annualized basis.

The revised NIPAs correct this problem by using indexes with weights that change over time. 1/ In particular, the indexes for the components of real GDP are themselves geometric averages of two indexes: one that uses previous-year prices (a Laspeyres index) and one that uses current-year prices (a Paasche index). 2/ The resulting indexes, by permitting variations in relative prices, yield a more accurate accounting of the contributions of the various components to growth in overall GDP. The previous 1987 constant-dollar measures have been replaced by “1992 chain-dollar” figures, which are the chain-linked real output indexes multiplied by nominal figures for 1992. 3/ A disadvantage of the new series is that the familiar national income account identities do not hold for the data in 1992 chain-dollar terms (for example, real GDP is no longer precisely the sum of real consumption, real investment, real government spending, and real net exports). Moreover, since the weights in the price series used as deflators vary over time, the new chain-dollar GDP measures do not capture changes in quantity alone, but also changes in prices

A third feature of the recent benchmark revision is an improved treatment of the public sector. In particular, in the previous NIPA series, government purchases of equipment and structures were treated as current expenditures. In the new series, they are treated as investment and are presented separately from current expenditures. In addition, the new series recognize depreciation of public capital. 5/ These changes enhance comparability with the national accounts of other countries and provide detail that is useful for analyzing aggregate saving and investment trends.

3. Investment trends in the post-revision data

Chart 1 compares trends in domestic investment in current-dollar terms since 1959, before and after the data revision. Private gross investment as a percentage of GDP is slightly lower in the post-revision data, in part because post-revision nominal GDP is higher. However, the trends in both data sets are broadly similar. After rising over the 1960s and 1970s, investment as a ratio to GDP peaked in the late 1970s. This upward trend in nominal investment was in part related to increases in the consumption of fixed capital, which stemmed from the rise in the capital/output ratio after the productivity slowdown of the early 1970s and the increasing importance of information-processing capital goods such as computers (which typically have short service lives). Investment net of depreciation has shown a downward trend as a percentage of net national product over the last two decades.

Some of the developments in private investment over the last 10-15 years reflect changes in the tax treatment of certain categories of assets. Residential investment declined through the late 1980s, as lower marginal tax rates enacted by the Tax Reform Act of 1986 decreased the implicit subsidy for owner-occupied housing resulting from the deductibility of mortgage interest from income taxes. Investment in nonresidential structures was strong in the years following the 1981 Economic Recovery Tax Act, which gave businesses accelerated depreciation allowances for such structures. The subsequent boom in the construction of office space and petroleum structures ended in the late 1980s in the wake of the Tax Reform Act of 1986, which withdrew many tax preferences for nonresidential investment, and the overbuilding in the commercial real estate market. The more recent strong rise of investment in producers’ durable equipment followed improved corporate profitability, lower interest rates, and stronger growth, as well as the passage of the Omnibus Budget Reconciliation Act of 1993, which improved tax incentives for business investment.

4. Saving trends in the post-revision data

The data for gross national saving before and after the revision show the same broad trends since the early 1970s—namely, a long-term secular decline between the early 1970s and the early 1990s (Chart 2). In the post-revision NIPA series, the data suggest some recovery in saving; however, the ratio of gross saving to GDP in 1995 was still below its level during the previous cyclical peak in the late 1980s.

About half the decline in gross saving from the early 1970s to the early 1990s was accounted for by lower private saving, which, in turn, resulted mostly from a fall in personal saving (Table 2). Part of the decline in personal saving may be explained by demographic trends, which resulted in an increase in the proportion of 20- to 35-year olds and retired persons in the general population (these groups tend to save less than other segments of the population). Lower personal saving could also be related to the increased efficiency of the financial sector; increased household wealth, reflecting rising housing prices until the late 1980s and rising stock-market prices subsequently, was also a factor. By contrast, business saving has been fairly stable at about 11-12 percent of GDP over the last 30 years.

For details of how these series are constructed, see “Alternative Measures of Changes in Real Output and Prices, Quarterly Estimates for 1959-92,” Survey of Current Business. March 1993.

This is known as a Fisher ideal index.

It should be noted, though, that the 1992 chain-dollar figures are based on price weights that vary over time. Hence, it is not strictly correct to think of them as “1992-dollar” figures.

For more details on the new measures of depreciation, see “Preview of the Comprehensive Revision of the NIPA’s: Recognition of Government Investment and a New Methodology for Calculating Depreciation,” Survey of Current Business, September 1995.

See “Preview of the Comprehensive Revision of the National Income and Product Accounts: Recognition of Government Investment and Incorporation of a New Methodology for Calculating Depreciation,” Survey of Current Business. September 1995, pp. 33-41. 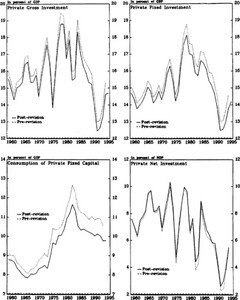 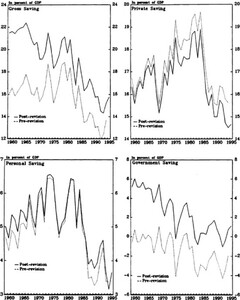