This Selected Issues paper examines the long-term issues with pension expenditures in the Netherlands. The paper highlights that the public pension for a single person is equal to 70 percent of the (statutory) minimum wage. The minimum wage and public pensions thus move in lock-step; they are both by law indexed to contract wages in the private sector. This paper examines the structural policies of the Netherlands. Real wages and employment growth are also analyzed.

This Selected Issues paper examines the long-term issues with pension expenditures in the Netherlands. The paper highlights that the public pension for a single person is equal to 70 percent of the (statutory) minimum wage. The minimum wage and public pensions thus move in lock-step; they are both by law indexed to contract wages in the private sector. This paper examines the structural policies of the Netherlands. Real wages and employment growth are also analyzed.

Weaknesses in the functioning of markets in the Netherlands are increasingly being addressed by structural policy actions. This chapter examines the structural situation in product and labor markets and discusses the main recent policy initiatives to improve market functioning.

In the Netherlands, a long tradition of cooperation exists between government and business as well as among entrepreneurs. This has allowed, inter alia, the construction of barriers to entry and the formation of cartels without government interference or even with its blessing. 2/ In recent years this practice has come under increasing scrutiny, and the Government has taken steps to strengthen the influence of market forces in order to improve the performance of the economy. This is to affect primarily the sheltered sector of the economy, as the open sector has long faced international competition and has been subject to the anti-cartel regime of the EU.

Despite this tradition of restrictive business practices, ill effects on overall economic performance have not been easy to detect. 3/ Business dynamism also does not appear to have been hampered: the rate of increase in the number of firms, at some 7 percent a year on a net basis, was high in the 1980s compared to other countries (Chart 1), and this rate was similarly high in the 1989-93 period. However, these new firms created relatively few jobs as many were one-person ventures, so that the high job growth experienced since the early 1980s occurred primarily in existing firms. 4/ In the last few years a number of studies have been carried out (in part with government support) to gauge the potential benefits of increased competition in various sectors of the economy. 5/ Surveying the literature, van Hulst (1996) estimates that benefits may add up to at least ½ percent of GDP a year, and notes that in professional occupations such as real estate brokers, notaries public, lawyers, and pharmacists, and in the semi-public sector such as transportation, limited competition has been found to be endemic.

Competition has also been limited in the telecommunications sectors, but its performance has not been poor by international standards (Chart 2) and its charges for commercial users relatively low, except in certain market segments such as mobile phone service. In the energy sector, where competition is limited although similar to those in countries such as Germany, average industrial energy costs are low by international standards, even if corrected for differences in taxation (Chart 2). Gains from increased competition may nonetheless be obtained through greater international trade that would allow reducing spare capacity [van Hulst (1996)].

Efforts to improve the functioning of markets began in the early 1990s. 1/ Three lines of action may be distinguished: anti-cartel measures, regulatory changes to enhance competition, and introduction of market forces in (heretofore) semi-public sectors. Initial efforts involved a prohibition of cartels and liberalization of regulations governing the establishment of new businesses. Specific annual tasks are currently set for the formulation of liberalization proposals, and a ministerial commission for “market functioning, deregulation, and quality of legislation” has been set up, consisting of the Prime Minister and Ministers of Economic Affairs, Justice, and Finance. It includes other ministers on an ad hoc basis depending on the topic being examined.

Anti-cartel measures have consisted of the general prohibition of price fixing from July 1993 and of market sharing and collusive tendering from June 1994. This was done on the basis of existing law—which allowed cartels unless they were specifically prohibited—resulting in some awkwardness in enforcement. Fifty requests for exemption had been received by early 1996, of which 40 had been denied, two granted, and eight were pending. A new competition law is under preparation that is expected to take effect in 1997. It is based on the prohibition principle similar to that used by the EU and includes merger control procedures. A new competition authority is to be established at arm’s length of the Ministry of Economic Affairs with broad powers to enforce the new law. 2/

In the regulatory field a number of changes are underway. The Netherlands has had rather restrictive regulations in the areas of business licensing and shopping hours. Overall, Dutch business licensing requirements were comprehensive and stringent, specifying substantial education and training in sectors such as construction, retail trade, and various services, which were seen as constituting significant barriers to entry. 1/ The licensing requirements were liberalized at the beginning of 1996, three years after the liberalization announcement was made so as to allow businesses time to adjust. Similarly, the Netherlands may have had the most restrictive regulations in the industrial world regarding shopping hours, with a maximum allowed number of opening hours of 55 per week (in Germany and Denmark the maximum is 67 and 78 hours, respectively). A new law regulating shopping hours has passed parliament and is expected to take effect in June 1996. Stores will be allowed to remain open until 10 p.m. and up to 12 times a year on Sundays, while municipalities may decide to allow night and additional Sunday openings.

The liberalization of shopping hours was one of the main subjects being examined in 1995 by the administration with a view to reducing legislative and administrative rules limiting competition. Others included:

Specific areas that began to be examined by the administration in 1996 include food product legislation, competition in the field of education, competition among hospitals, regulation of insurance agents, and regulation of noise abatement. The examinations are to result in concrete proposals for increasing competition and streamlining regulations by mid 1996. As the Government has announced that five to ten new areas are to be examined each year with a view to forming recommendations for improved market functioning, selection of those for 1997 is currently underway. Furthermore, apart from these efforts, measures are being taken to reduce the administrative burden on businesses and to curb burdensome aspects of new regulations.

In the transportation sector, rail transport is being streamlined with a view to privatizing the sole railroad (Nederlandsche Spoorwegen) in due course. Unprofitable lines are to be shut down, or to be maintained under specific government contracts, and new providers of rail transportation are beginning to be allowed. Competition in regional bus service, which until recently was firmly lodged in the semi-public sector, is being increased through competitive bidding for routes. For example, in the south of the country (near Maastricht) an American company is running a number of routes.

The main labor market problem concerns the employment rate (in full-time equivalents) which, while trending upward since 1985, is one of the lowest among industrial countries (Chart 3). The low employment rate implies that the national product is produced in relatively few hours, and that tax rates are high in order to support the large part of the population that draws social benefits. Labor productivity is high, although its growth has slowed in tandem with the wage moderation and strong employment growth of the last 10 to 15 years (see Chapter III). Moderate wage cost levels combined with high labor productivity imply that the level of unit labor costs is relatively low (Charts 3 and 3a). Labor market relations are harmonious as evidenced by the low number of days lost to strikes; this achievement could be related to the relatively flat distribution of earnings, 1/ which carries efficiency costs.

Indicators of the degree of flexibility of the labor market are mixed: a measure of job turnover suggests that it is relatively low (Chart 3a, last panel), but employment growth is high and the number of part-timers, particularly among female workers (two out of three), remarkable. Furthermore, about one third of workers have evening working hours, 10 percent of jobs are temporary, and wage flexibility in response to unemployment appears to be in line with international experience. 1/

The Government aims to increase the employment rate (in full-time equivalents) so as to make better use of the available labor potential and reduce the number of people on social benefits (in particular disability, unemployment, and welfare). It is recognized that the main changes that would help speed up these desired improvements include greater wage differentiation, reduced taxation of labor, and increased labor market flexibility, and changes have indeed been made in several policy areas. 2/ The high tax wedge has distorted the labor market by reducing the incentives to hire, and to seek, employment. The wage bargaining system, while contributing to stability at the macro level through moderate wage growth in the last 10 to 15 years (see Chapter III) and absence of labor strife, may have kept wage differentials artificially narrow and inhibited flexibility. Labor market regulations that had been designed to provide permanent workers with job security and to protect workers from excessive labor practices appear to have become stifling in some cases. More specifically:

Data on employment growth in chapter III and chart 3 are not fully comparable.

A recent one found that competition appeared to be relatively low in the sectors construction supplies and paper goods as their long-term profits were relatively high and persistent [Kleijweg and Nieuwenhuysen (1996)].

The complete opening of the internal market in the EU in 1993 has also increased competition.

In the area of reducing corporate takeover defenses, a compromise has been reached between the stock exchange, listed companies, and the government, and new legislation is being drafted. In essence, it was agreed that defenses may be dismantled when a party holds 70 percent or more of a company’s share capital for at least a year.

In addition to the small difference between average and lowest wages, which for all European countries lies well below that for the United States, it may be noted that wage growth in exposed and sheltered sectors has been virtually identical in the last 10 years, and that the OECD has estimated that the Netherlands has the lowest wage dispersion in industrial sectors compared to the G-7 and Denmark.

See Theeuwes (1995), which discusses a Dutch study that finds aggregate wage flexibility not less than in the US, with the effects of unemployment on wages borne by new hires in the US but more spread out in the Netherlands (possibly due to the institutional roles of unions and employers’ organizations).

While employment growth has been impressive in the last 10 years, labor market reform could increase it further.

Defined as the difference between labor costs and net wage relative to labor costs, including social security charges and supplementary pension premiums.

The incentive problem would be addressed through an additional welfare payment.

In 1995, 40 percent of requests for firing were lodged with the courts. 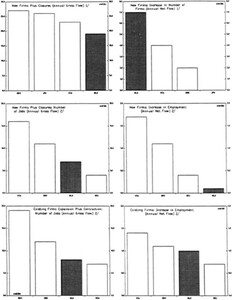 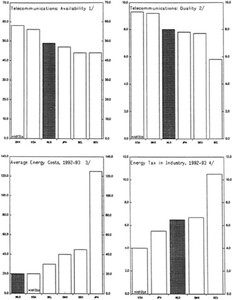 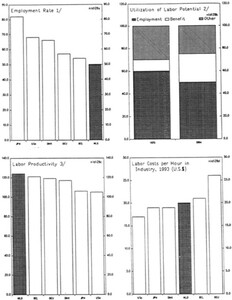 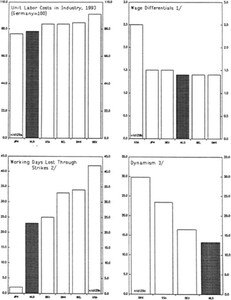 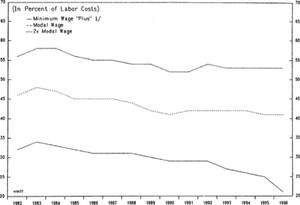