This Selected Background Issues paper analyzes sectoral wage differentiation and labor cost issues in Belgium. The paper discusses wage dispersion across sectors in Belgium and compares it with the pattern in other European countries. It analyzes the data for the Organization for Economic Cooperation and Development used in the Central Economic Council assessment of competitiveness, underscoring the role of social security contributions and restrictions on part-time work in the evolution of labor costs per employee. The paper also examines trends in saving and investment, and the pension reform in Belgium.

This Selected Background Issues paper analyzes sectoral wage differentiation and labor cost issues in Belgium. The paper discusses wage dispersion across sectors in Belgium and compares it with the pattern in other European countries. It analyzes the data for the Organization for Economic Cooperation and Development used in the Central Economic Council assessment of competitiveness, underscoring the role of social security contributions and restrictions on part-time work in the evolution of labor costs per employee. The paper also examines trends in saving and investment, and the pension reform in Belgium.

This note provides background information on the health-care system in Belgium and discusses recent measures to improve its functioning. The public health care system in Belgium is of interest because, unlike in a number of other European countries, it has moved beyond the use of budgetary ceilings.

Public health care in Belgian has gone through three phases since World War II. The first phase, lasting until 1970, was characterized by continuous expansion and little attention to costs. The following fifteen years were characterized by a rationalization process, implemented through general budgetary ceilings. In the third phase (started in the mid 1980s) greater attention has been devoted to the “production” side, i.e., new management systems based on detailed clinical and cost information were introduced. The policies in this phase, which sets Belgium apart from some other European countries which still rely mainly on budgetary ceilings, have been underpinned by a continuous series of measures.

Health care in Belgium is based on independent medical practice (médecine libérale), funded by compulsory health insurance (with co-payments by patients). This compulsory system covers major risks for the entire population and minor risks for about 85 percent of the population. It is administered from a single fund, with five confederations of mutualités (non-profit sickness funds, or mutuals) acting as carriers of the insurance cover. 2/ Workers have to join a mutual, but the choice of doctor and mutual is free. The number of doctors per inhabitants is very high in Belgium, and physicians’ average income to average employee income is noticeably low. Otherwise, health statistics (e.g., life expectation) are fairly typical for a Western European country.

Patients pay for most ambulatory care and are partially reimbursed by their mutuals. Doctors are independent professionals; paid by fee for services. Fees are set by agreements between the mutuals and doctors and approved by the government (doctors who want to charge more have to advertise this fact). 3/ Co-payments vary according to the status of the patient (the two main classes of patients are the ordinary beneficiary (TIP); and widows, disabled, old age pensioners, and orphans (VIPO), who pay less). Patients are not required to visit a general practitioner before visiting an specialist (the government is, however, considering the establishment of a screening system).

There is a mix of private, non-profit, and public hospitals. The bulk of hospital costs is paid directly by the mutuals; patients pay for board and special accommodation. Health care insurance also covers expenses for nursing and physiotherapy at home, nursing homes, and residential homes for the elderly.

Prices of pharmaceutical products are subject to product-by-product negotiations between the government and producers. For reimbursement purposes, drugs are divided into six categories, with reimbursement rates varying from 75 to zero percent.

Contributions corresponded to 54 percent of current revenues in 1993 (Table 1). Transfers from other public funds and the state made up most of the remaining revenues. Expenditure as a share of GDP was stable in 1992-94, but is expected to have increased again in 1995 (measurement of health expenditure over a longer period is difficult, because the scope of expenditure figures has changed over time--the OECD estimates that the share of total health expenditure in GDP rose from 6.6 percent in 1980 to 7.6 percent in 1990). The government is currently aiming for real growth in health care expenditure of 1.5 percent a year (i.e., below the rate of growth of GDP).

Since 1982, the government has set budgets and targets for the annual number of days of treatment to be provided by hospitals. Hospitals which exceed their quota of days are penalized by receiving only a fraction of their assessed variable costs. In setting the budgets, hospital costs are divided into three parts: nursing and supply costs, adjusted according to specialty mix and level of clinical activity; hotel service costs, which are indexed; and capital costs, which are agreed beforehand in accordance with investment plans approved by the central or regional governments.

Modernization of the System

In 1978-85, the government overhauled reimbursement systems for ambulatory care, pharmaceutical, and hospitals (the average length of stays fell by over 10 percent in the 1980s). It also engaged in a comprehensive program of reducing the number of available beds (although to date it managed to close only about half of what was initially planned). 4/ In addition, several intensive-care beds were converted into geriatric services and other activities which command lower reimbursement cost. One major step was the consolidation of many small hospitals, with the accreditation standard set at a minimum of 150 beds with appropriate staff and services.

Among the initial reforms in “phase three” of the public health care system was the establishment in 1986 of hospital committees linking doctors to the administration of hospital. The centralization of the billing process (including both hospital expenditures and medical fees) was also introduced in the 1980s together with the automatization of many data management tasks.

Early on, Belgium adopted the US-developed classification system of diagnostic related group of illnesses (DRG), which is a tool to normalize costs and treatments according to groups of illnesses with a view to controlling health care costs. 5/ Detailed information has permitted standardization of average stay lengths and expenditure according to the case mix of individual hospitals and establishment of penalties/rewards to hospitals deviating more than 2 percent from the national normalized average.

A major advance in recent years was the adoption of standardized clinical minimum records (RCM) in late 1990 (and nursing minimum records (RIM) in the following years), which has led to a detailed knowledge of services provided throughout the country (Ministry of Health, 1994). Standardized financial records (RFM) were also introduced. Until now, the RFMs (managed by the National Health Institute--INAMI) and RCMs (collected by the Ministry of Health) have not been integrated--a commission was, however, established in 1995 to detail a program aiming at the integration of this information in 1996-97 (a pilot program is already in place).

The use of other electronic techniques have also spread in recent years. For instance, a bar code now links drugs reimbursed by social security with the doctor who prescribed them and the patient using them (doctors are regularly informed about their profile, but there are no penalties for deviations from the average profile).

A commission, established in late 1995, is setting medical guidelines to be followed by doctors. 6/ It will also provide the framework for the establishment of “peer review” committees regarding medical procedures. Although doctors have in principle supported such initiatives, there is less agreement on the exact way to implement them. One major concern, which has been successfully addressed in the case of the RCMs/RIMs, has been to guarantee the anonymity of patients. Concerns regarding punitive powers to be granted to review committees have found less satisfactory solutions. 7/

Together with fuller use of new techniques, the government is establishing a number of incentive-compatible schemes. For instance, since 1995 part of the reimbursements made to mutuals is not based on actual costs, but on norms taking into account health and social indicators of the covered population (the proportion will be raised from 10 percent in 1995-96 to 30 percent by 1999). 8/ These measures are expected to force mutuals to negotiate with providers (as HMOs do in the US), favoring a curbing of expenditure growth. The government has also established financial incentives for communities willing to close redundant hospitals. Special arrangements are also planned to foster out-patient care in the case of minor interventions.

See OECD (1992) for a detailed description of the structure of the health care system in Belgium. Part of the material in this note draws from this publication.

If an agreement is rejected by more than 40 percent of practitioners, the government can intervene and impose fees for some or all of the services.

One exception to the general decrease in the number of beds was the region of Brussels, where for a variety of reasons new university hospitals were built.

To date reimbursements are actually based on “inferred” DRG, i.e., actual medical acts (detailed on insurance claims) are matched to the most likely DRG, with final payment set according with the latter.

These guidelines will not be mandatory procedures (e.g., somewhat like the French “références médicales opposables”).

Enforcement of some measures taken in the past has been difficult--in particular in the case of laboratories. In many instances parties have ended up in courts. The government has attempted to strengthen the institutional bodies representing professional groups as a way to reduce such conflicts.

Until fuller integration of data systems yields more detailed information the government is using econometric models (Laasman, 1993 provides an illustration of this class of models). The most important variables considered in these models are the mortality and disability rates, age and sex distributions, and the unemployment rate. 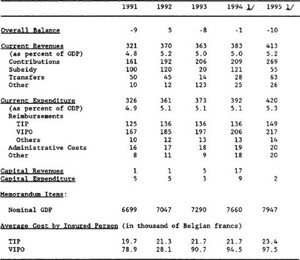