This Background Paper on Nepal highlights that during 1993/94, overall economic performance was generally favorable. Real GDP grew by nearly 7 percent, largely owing to the good monsoon that helped boost agricultural output significantly above the low levels recorded in the previous year. Inflation remained stable at about 9 percent, closely following price developments in India. Reflecting the substantial improvement in government revenue collections, net domestic financing of the budget deficit was contained at 1 percent of GDP.

This Background Paper on Nepal highlights that during 1993/94, overall economic performance was generally favorable. Real GDP grew by nearly 7 percent, largely owing to the good monsoon that helped boost agricultural output significantly above the low levels recorded in the previous year. Inflation remained stable at about 9 percent, closely following price developments in India. Reflecting the substantial improvement in government revenue collections, net domestic financing of the budget deficit was contained at 1 percent of GDP.

Nepal’s economy is closely linked with India’s due to the geographical proximity of the two countries and the historically strong ties between their business communities. This close economic relationship is reflected in large bilateral trade flows—including substantial unauthorized trade in primary products and goods along the 500 mile long open border—and the close relationship between price movements in the two countries (Chart 3). It is also manifest in the significant direct investment in Nepal’s tourism and industrial sectors by Indian nationals and companies. 1/ Transactions among the residents of the two countries are facilitated by the free convertibility between the Nepalese rupee (NR) and the Indian currency (IC) and the effective peg since 1982 of the NR to the IC. 2/ Economic ties are further strengthened through the regular migration in both directions of agricultural and unskilled labor.

In 1950, Nepal and India entered into a Treaty of Peace and Friendship (TPF) that was designed to serve as the foundation for bilateral relations. The TPF defines the principles for cooperation in security matters and specifies rules governing economic relations between the two countries, which include a very liberal set of regulations regarding capital controls between the two countries. Under the terms of the treaty, Nepalese and Indian citizens may freely engage in portfolio and equity investment in either country and may open bank accounts in the other country. In addition, they may hold unlimited amounts of currency. In fact, however, more recent legislation in Nepal has overridden the TPF’s provisions on capital flows.

In 1965, Nepal enacted the Restrictions on Foreign Investment Abroad Act (RFIAA). This act placed strict controls on the rights of Nepalese citizens and all companies established in Nepal to move or invest capital abroad. 1/ The RFIAA does not make an exception for transactions involving India, and India, which is primarily concerned with the security provisions of the TPF, has never taken issue with the RFIAA. There have significant revisions to the RFIAA since it was enacted and it continues to govern foreign investment by Nepalese citizens.

Under the RFIAA, “investment” encompasses foreign securities, partnerships in foreign firms, accounts with foreign banks in foreign countries, houses and land abroad, and all other types of investment abroad in cash and in-kind. A foreign security is any share, stock, bond, debenture, or government security originated or issued abroad and on which the principal, dividend, or interest paid is either in foreign currency or paid abroad. The act states clearly that no Nepalese citizen or company is permitted to undertake any of the activities defined as “investment.” 2/ The penalty for violation is a fine equal to the amount invested abroad or six months in prison, or both.

In addition to restrictions on Nepalese foreign investment abroad, there are some restrictions on foreign investment in Nepal. Most notably, the Securities Trading Act (1983) prohibits foreign institutions and individuals from purchasing stocks, bonds, and government securities in Nepal. Foreigners are allowed to take equity stakes in firms, but are currently restricted to investments of NR 20 million or more, a rule that effectively blocks most foreign direct investment in the services (i.e., tourism) sector.

Nepalese and Indian banks are bound by regulations that serve to prevent large capital flows between the two countries. For example, although the NR is freely convertible into IC, no Nepalese bank is permitted to trade in IC. 3/ Nepalese citizens wishing to transfer IC abroad (e.g., to pay for imports from India) must provide documentation (e.g., an import bill) to obtain the IC from Nepal’s banks. This limits the possibility for individuals to convert large amounts of NR into IC and transfer the funds to India for purposes other than payment for imports. In addition, Nepalese banks are prohibited from transferring to India more than the equivalent of IC 10,000 at one time without documentary evidence.

Since May 1993, specified Nepalese citizens and organizations that earn income in convertible foreign exchange have been permitted to retain the income in convertible foreign currency accounts in Nepal. However, these resources can only be used for very specific purposes, making it difficult to transfer them to India for investment. In particular, these resources may be used to pay for imports, including for personal consumption, and for studies, medical treatment, and travel abroad. To withdraw foreign currency to pay for imports, the firm or individual must provide an import bill. To withdraw it or transfer it abroad for the purposes of studies, etc., the account holder must present a valid passport and confirmed air ticket.

Notwithstanding the considerable legal and other institutional constraints to capital flows between Nepal and India, there are a number of avenues through which capital can flow in contravention of formal regulations. These means include direct trading of assets in the border areas and the use of proxies to move capital from one country to the other. Purchase and sale of assets in the border areas is apparently widespread and extends to securities and fixed assets such as land and housing. The demand for Indian securities in Nepal is prevalent enough that Indian brokers operate regularly in towns in the Terai region.

Capital can move between Nepal and India through proxies that include relatives, friends, and businesses. First, Nepalese citizens residing in India are permitted to open interest-bearing IC accounts there. This allows them to move capital to India for relatives and others who may wish to benefit from deposit interest rate differentials, or to have available funds in India for investment in other assets. To move substantial funds across the border requires, however, that cash IC be purchased in the border regions and taken to India for deposit. Second, Nepalese residents can purchase IC in the border regions and use it to purchase assets through proxies or personally while travelling in India. Indian citizens can do likewise while travelling in Nepal. Third, Indian-owned businesses registered in Nepal are jurisdictional citizens and therefore can invest in Nepalese securities of any type and hold interest-bearing accounts in Nepal. This allows the owners of these firms to benefit from differential rates of return in Nepal and India so long as they can devise methods to move capital for investment purposes. These firms may be able to move large amounts of capital, allowing them to take advantage of favorable rates of return on high denomination, low-risk (e.g., government) securities.

The amount of private capital that flows between Nepal and India is unknown but is believed to be substantial. The previous sections have shown that while there are strict legal controls and other institutional constraints on these flows, there are also means by which capital can move from one country to the other and from Nepal to the rest of the world. This section examines whether recent information from financial markets in Nepal and India provides evidence suggesting the hypothesis that capital flows between these countries is sufficient to imply a high degree of financial integration.

Auctions for 91-day treasury bills have been established in both Nepal and India in recent years; in Nepal in February 1992 and in India in January 1993. In Nepal, the Nepal Rastra Bank also auctions 91-day bonds, primarily as an instrument to soak up commercial bank liquidity. Yields on Nepalese treasury bills and NRB bonds are closely linked since the NRB sells the instruments in contemporaneous auctions.

Since the beginning of treasury-bill auctions in India, nominal yields on 91-day government securities in the two countries have followed the same broad trend, albeit with the Nepalese rate fluctuating in a volatile manner around the Indian rate in 1993 (Chart 4). The volatility in the Nepalese treasury-bill rate can be attributed in large part to NRB operations to reduce the liquidity of commercial banks through the sale of NRB bonds. Specifically, the NRB sold into the market NRB bonds substantially in excess of those required to roll-over past issues in the periods April to June and August to October 1993, and in January 1994. The largest and most sustained of these operations, during April to June 1994, reflected NRB attempts to offset the liquidity effects of massive Government borrowing through the overdraft facility at the NRB.

Except for the periods prior to exchange rate unification in Nepal (February 1993) and during the sterilization operation relating to Government borrowing noted above, the yield on treasury bills in Nepal has essentially remained below that in India. If the Nepalese and Indian financial markets were de facto open to each other, then in the presence of the exchange rate peg between the countries’ currencies, uncovered interest parity would suggest that major interest rates would be approximately equal in nominal terms. 1/ Given that the 91-day treasury-bill rates have differed substantially in one direction during the period of auctions in both countries, this suggests that large, equilibrating capital flows are not present, particularly from Nepal to India. This is perhaps not surprising since the available avenues for capital flows out of Nepal are relatively restricted and, therefore, enforcement of restrictions may be more effective. This may be particularly true for the types of large investors (e.g., banks, companies) that might attempt to benefit from higher returns on securities in India.

Trade between the two countries is prohibited for (i) goods which are prohibited for export to overseas markets and to each other’s territories to prevent trade diversion to third countries; and (ii) goods subject to price control within the domestic market (e.g., fertilizer). There is also an agreement between Nepal and India to control unauthorized trade. Under the agreement, each country is obligated to take measures (e.g., border patrol) to control such activities.

Foreign-owned firms in Nepal have the right to repatriate profits under the Foreign Investment and Technology Transfer Act of 1992.

The act does allow for the government to gazette exceptions to the restrictions on foreign investment. To date, a single exception has been made; a Nepalese businessman was allowed to open a wool-washing plant in Tibet.

Any IC received as payment for Nepalese exports to India must be converted immediately into NR with the Nepalese banks.

The tax treatment of returns on Treasury bills may explain part of the observed difference in rates between Nepal and India. 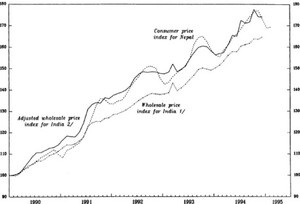 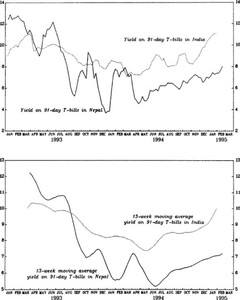