III. Estimates of the Structural Rate of Unemployment 1/

Numerous studies have attempted to explain the large rise in the unemployment rate in a number of industrialized countries over the past 20 years. However, as emphasized in a recent survey by Bean (1994), the competing theories of unemployment often do not provide clear cut explanations for the unemployment experiences of both Europe and North America. 2/ Nonetheless, estimates of the level of structural unemployment, or the nonaccelerating-inflation rate of unemployment (NAIRU), are an important element in gauging wage and price pressures in the economy.

Updated estimates of the NAIRU for Canada are presented below. 3/ The methodology adopted is to estimate long-run values for the employment/population ratio and the participation rate separately, and use these to calculate the NAIRU. In particular, the employment/population (E/P) ratio is assumed to be explained by the change in payroll taxes (Δptax), unemployment insurance benefits (uben), and the unionization rate (union), defined as the ratio of union membership to nonagricultural workers.

It is assumed that only the change in payroll taxes affect the employment/population ratio because, in the long run, wages are assumed to offset the level of payroll taxes. 4/ The unionization rate is included as a determinant of E/P because unionization is assumed to affect the bargaining process between firms and workers, causing wages to rise above their long-run levels, and employment to fall below its long-run level. The participation rate is also included as a determinant of the ratio of employment to population, since it is assumed that the ability of firms to create employment is limited in the long run by the availability of labor. 1/ The output gap (Y-Ypot) is also assumed to affect the employment/population ratio on the assumption that short-term shocks to the economy cause permanent effects on the level of employment. 2/

As a preliminary step, tests were conducted to determine whether the data were stationary. These tests indicate that the data were integrated of order 1 (with the exception of the female/population ratio and the change in payroll taxes, which were stationary in levels). When data are nonstationary, standard significance tests using the t-statistics are not valid.

Therefore it is necessary to find a long-run, linear relationship whose residuals are stationary in order to conduct statistical inference. This relationship is termed a cointegrating relationship. As a result, the existence of long-run structural relationships for E/P and L/P was tested by estimating the following equations (t-statistics are in parenthesis). 1/

The results were generally satisfactory. The estimated coefficients were of the correct sign and augmented Dickey-Fuller (ADF) tests indicated that the hypothesis of cointegration--i.e., the existence of a long-run relationship--could not be rejected. 2/ When the variable measuring the effect of UI benefits (uben) was included in the equation explaining the participation rate, the estimated coefficient had the incorrect sign. However, when uben was multiplied by a dummy for periods in which real GDP declined (d1 = 1 when GDP growth is negative, 0 otherwise), the estimated coefficient was positive, presumably capturing the reluctance of the unemployed to leave the labor force during cyclical downturns because of the generosity of unemployment insurance.

The estimates of the long-run employment/population ratio and participation rate can be used to calculate the NAIRU as follows:

The long-run and actual values for the employment/population ratio, the participation rate, and the unemployment rate are presented in Chart III-1. Since 1988, when it reached its peak at 9 percent, the NAIRU has gradually declined and is estimated to have fallen to 8 3/4 percent in 1994, as a result of a slight decline in the unionization rate and the generosity of UI benefits.

The results appear to be within the range of recent estimates (see tabulation above). For example, OECD (1994) estimates that the NAIRU fell from about 9 percent during the late 1980s to 8 1/2 percent in 1993. Point estimates of the NAIRU are heavily dependant on the equation specification (see the analysis by Setterfield et al.). Nonetheless on the basis of the analysis above and the estimates cited below, a reasonable estimate of the NAIRU would appear to fall within the 8 to 9 percent range.

For example, Blanchard (1995) examines unemployment in Spain and Portugal and finds that none of the existing theories of unemployment can explain the wide difference between the unemployment rates in these two countries. Card and Riddell (1993) also are unable to explain most of the recent increase in the gap between Canadian and U.S. unemployment rates. Setterfield, et al. (1992) illustrate that the confidence interval around estimates of the nonaccelerating inflation rate of unemployment (NAIRU) for prime-age males in Canada spans almost the entire range of unemployment rates experienced by this group over the 1956-87 period.

Underlying this assumption is the view that the long-run supply of labor is relatively inelastic. While the empirical evidence on the link between labor taxes and long-run unemployment is mixed, a recent analysis by Nickell and Bell (1994) suggests that the effect should only be present in the short run.

For example, many authors have noted that Europe’s inability to create jobs over the past 20 years is partly a result of its weak labor force growth (see Layard 1986). Bean and Layard (1989) emphasize that over the period 1900-85 the unemployment rate in the United Kingdom showed little trend because employment adjusted to the massive labor force changes. They argue that “in the long-run employment follows the labor force, and any meaningful model of the economy must reflect this tendency.”

This effect has been particularly strong in recent years. Over the period 1989-93 the youth participation rate declined by 6 percentage points.

The uben variable includes an index of the generosity of unemployment compensation across provinces because in Canada, the maximum number of weeks an individual is eligible for UI benefits and the minimum number of weeks of work needed to qualify for benefits depend on provincial unemployment rates. The use of this type of index can lead to an estimation bias and therefore we use the aggregate replacement rate as an instrument for uben.

The ADF test statistic indicates that the linear combination of variables in both the employment-population and participation rate equations are stationary at the 10 percent significance level. The ADF test failed when the output gap variable was excluded from the equations, indicating the importance of hysteresis effects.

CANADA COMPONENTS OF THE UNEMPLOYMENT RATE 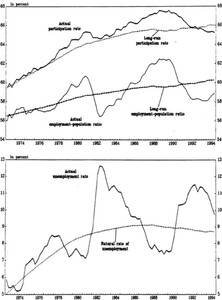