Spurred by the robust growth in the United States and the easing of monetary conditions between 1991 and 1993, economic growth in Canada continued to strengthen during 1994. Real GDP grew by 4.5 percent in 1994 after growing by 2.2 percent in 1993 and 0.6 percent in 1992 (Chart II-1 and Table II-1). As in 1993, economic growth in 1994 was led by exports and investment in machinery and equipment. However, growth was more broadly based in 1994; private consumption strengthened, and there was a rebound in residential and nonresidential construction. Government purchases continued to be weak, reflecting fiscal consolidation at all levels of government.

(In percent change, unless otherwise indicated)

(In percent change, unless otherwise indicated)

Real exports grew by 14.4 percent in 1994; merchandise exports rose by 15.1 percent and nonfactor service exports rose by 9.3 percent. The growth in merchandise exports was led by machinery and equipment (up 29.1 percent); in addition, most other major export categories, including automobiles, industrial materials, natural resource sector, consumer goods, experienced double-digit growth rates. The strong growth of real exports since the end of the 1990-91 recession led to an increase in the output share of real exports from 30 percent in 1991 to 38 percent in 1994. This was largely the result of the robust growth of the U.S. economy, a large depreciation in the real effective terms (owing to both the nominal depreciation and a decline in unit labor costs), and a rise in commodity prices (Chart II-2).

Residential investment was spurred largely by an improvement in consumer confidence beginning in the second half of 1993 (associated with a pickup in employment) and very favorable affordability conditions (see Chart II-3). However, residential investment dropped off significantly in the second half of 1994 owing to the sharp rise in interest rates that began in early 1994. Investment in machinery and equipment rose by 8.6 percent in 1994, as investment demand broadened beyond computers and other office equipment. The rapid rate of investment has been attributed to the continuing economic restructuring by Canadian firms, particularly in the tradeables sector, as well as to the need to increase capacity in industries where capacity utilization was approaching record levels.

Personal consumption growth began to pick up in the second half of 1993, in line with the acceleration of employment growth and an associated rise in consumer confidence (Chart II-4). Aggregate consumption grew by 3.1 percent in 1994, up from 1.6 percent in 1993; growth was led by durable goods consumption, which increased by 5.0 percent despite the rise in interest rates during the year. Despite strong gains in private-sector employment, personal income growth was relatively weak (2.3 percent) because of low wage growth, declines in public sector employment, and stagnant government transfers. As a result, the personal saving rate fell from 9.2 percent in 1993 to 7.6 percent in 1994.

Notwithstanding the improvement in competitiveness of Canadian firms, imports grew rapidly in 1994, as they had done since the end of the 1990-91 recession. As a result, the contribution of net exports to the growth rate of real GDP was 1.4 percentage points. The strong growth in imports was the result of two factors: first, the extensive intra-industry trade between Canadian and U.S. firms (notably in the automobile industry), which meant that Canada’s export boom was accompanied by strong growth in imports of U.S. industrial materials and intermediate inputs; and second, the large import share of domestic investment in machinery and equipment (Chart II-5).

Employment growth remained sluggish in the two years following the cyclical trough in 1991, averaging less than 1/2 percent a year. During 1994, however, employment grew by 3 percent, raising aggregate employment in the fourth quarter to 230,000 above the level of the previous cyclical peak in 1990 (Chart II-6). 1/ The unemployment rate fell by 1 1/2 percentage points during 1994, reaching 9.6 percent in December, and remained constant at that level in the first quarter of 1995 (Chart II-7). This decline was entirely the result of strong employment growth, as the participation rate remained at 65 percent during 1994, following a 2 percentage point decline between 1990 and 1993.

Factors thought to have been responsible for the sharp decline in the participation rate during the early 1990s include the recent large inflow of less-skilled immigrants into Canada and the postponement of entry into the. labor force by a significant fraction of the youth population. The participation rate of youths has declined by 6 percentage points since 1990 to 63 percent in 1994 whereas the participation rates of prime-aged males and females have remained relatively constant at 92 percent and 76 percent, respectively (Chart II-8).

The decline in the youth participation rate may have reflected poor employment opportunities for relatively unskilled workers. The unemployment rate for youths has risen by 5 percentage points since the last cyclical peak (even in the face of the steep decline in the participation rate), compared to a 1 1/2 percentage point increase in the unemployment rate for adult females and a 2 3/4 percentage point increase for adult males. This reflects the fact that youths are generally less skilled than other demographic groups in terms of education qualifications and job experience, and therefore tend to be the first group to be laid off during cyclical downturns.

However, these developments may have been the result of a structural decline in the demand for unskilled workers (particularly youth) owing to technological change and the substitution of capital for labor. Indirect evidence of a structural change in the labor market is provided in Chart II-9, which shows a significant rise in the mean duration of unemployment from about 16 weeks in early 1990 to 26 weeks in 1994, a much higher level than in 1985 (22 weeks), when the economy was at a comparable position in the business cycle. This suggests that the share of long-term unemployment in total unemployment has risen since the earlier period.

The sluggish employment growth in goods industries between 1991 and 1993 appears to have reflected a preference by firms to adjust hours rather than employment. 1/ In particular, the sharp rise in payroll taxes over the past few years, which has raised substantially the cost of hiring, may have made firms reluctant to hire new workers. Average weekly hours in goods producing industries have risen by one hour since 1991, compared with a half-hour increase during the three years following the previous cyclical trough (see Chart II-9). By contrast, the real hourly wage has adjusted little since 1991, despite the increase in the unemployment rate and evidence of considerable slack in labor markets. By contrast, real average hourly earnings fell by 4 percent in the previous period of excess supply in the mid-1980s.

Inflation remained low in 1994, despite the large depreciation of the Canadian dollar and the rise in industrial product prices. CPI inflation was just 0.2 percent during the year, partly owing to the effect of a large reduction in tobacco excise taxes early in the year. Core CPI inflation (i.e. excluding food, energy, and the effect of indirect taxes) was 1.6 percent during 1994, down from 1.8 percent during 1993 (Chart II-10 and Table II-2). The low rate of inflation is attributable in large part to the slack that still remains in the economy, despite the strong growth in output and employment that took place in 1994. The staff calculates the output gap in the fourth quarter of 1994 in the neighborhood of 2 to 3 percent. 2/ While the capacity utilization rate for the nonfarm goods sector rose to 4 percentage points above its 1975-1994 average by the end of 1994, the nonfarm goods sector comprises only 26 percent of GDP, and the capacity utilization rate in the service sector is estimated to be well below its long-run average. There is also considerable variation in the rate of capacity utilization across nonfarm goods industries; the export sector is operating at 8 percentage points above its long-run capacity utilization rate (Chart II-11).

Wage pressures were largely absent in 1994, with wage settlements for commercial industries averaging annual increases of just 0.9 percent in base rates, and aggregate average hourly earnings increasing by 1.5 percent. Together with gains in productivity, the low growth of wages contributed to a decline in unit labor costs of 1.3 percent in 1994 (Chart II-12).

Industrial product prices grew by 7.9 percent during 1994, up from 3.9 percent during the year earlier, reflecting both the depreciation in the Canadian dollar and the rise in international commodity prices. However, it should be noted that the increases in prices were driven primarily by increases in the prices of export goods, and that the correlation between consumer prices and industrial prices is not very high.

However, employment in goods-producing industries remains considerably below its previous cyclical peak.

This behavior was also evident in the early stages of the recent U.S. recovery.

CANADA PARTICIPATION AND UNEMPLOYMENT RATES BY AGE AND SEX 1/ 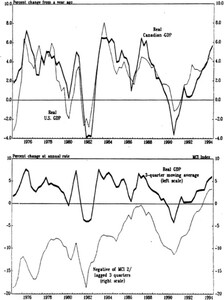 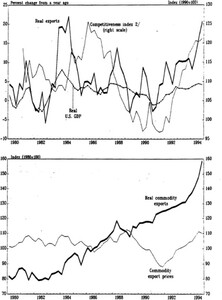 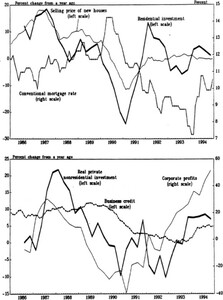 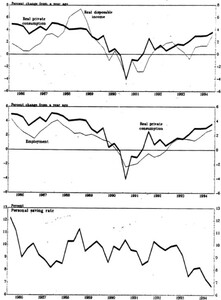 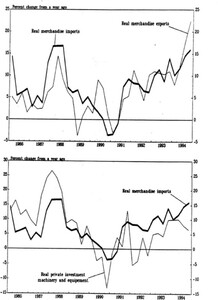 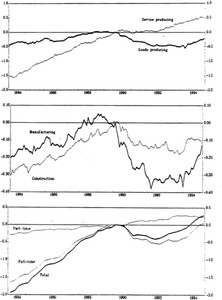 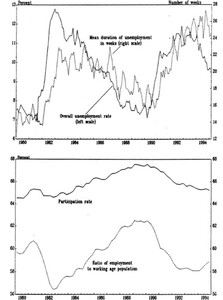 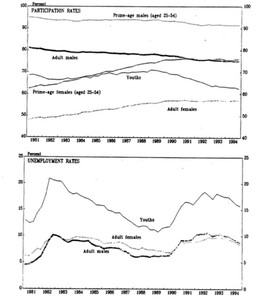 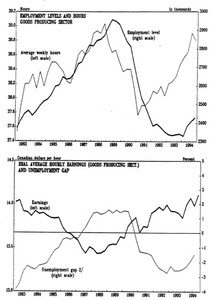 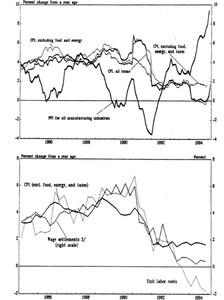 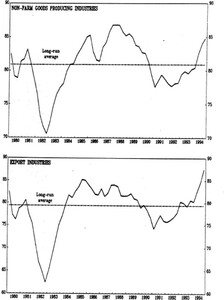 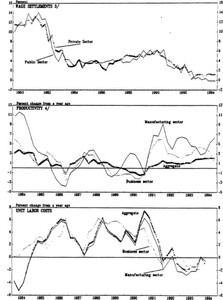