The United States’ original submission for the Paris Agreement was to reduce GHGs 26-28 percent below 2005 levels by 2025. On current policies it will fall somewhat short of this pledge (see below).

For example, IMF (2019a, Figure 1.4) put local environmental benefits—principally reductions in local air pollution mortality—from a $50 carbon price in 2030 at 0.2 percent of GDP compared with economic efficiency costs (losses in consumer and producer surplus in fossil fuel markets) of 0.1 percent. Reducing local air pollution can also increase labor productivity (e.g., Graff Zivin and Neidell 2012). US GDP losses for a similarly scaled carbon tax in 2030 with revenues used to substitute for labor income taxes, are put at 0.3 percent on average across six energy models, or about twice as large if revenues are used for lump-sum dividends (see Goulder and Hafstead 2018, Table 5.2, and below).

Gross emissions can be positive, if they are offset by negative emissions (e.g., from reforestation, direct removal of CO2 from the atmosphere).

EIA (2020) projects US CO2 emissions are flat to 2050 undercurrent policies. The focus year of the analysis below is largely 2030 given that most countries have set intermediate targets for that year.

In 2007, the Supreme Court remanded the matter to EPA, but expressly didn’t reach the question of whether EPA must make a finding that GHGs endanger public health or welfare, or whether policy concerns may inform EPA’s actions in the event that it makes such a finding. See www.justice.gov/enrd/massachusetts-v-ep.

Nine legislative proposals for a federal carbon tax have been put forward by various representatives and senators in the US Congress since 2018 (for a comparison of their design features see www.energypolicy.columbia.edu/what-you-need-know-about-federal-carbon-tax-united-states). For example, the Energy Innovation and Carbon Dividend Act, which is the first bipartisan climate legislation in a decade, was introduced as H.R.763. The bill includes a carbon fee on fossil fuel suppliers with rate beginning at $15 in 2019 per ton and rising at $10 per ton each year, a BCA, and return of revenues in dividends to households. The main attempt to pass a federal ETS in the United States was the ‘Waxman- Markey’ bill which passed the House in 2009 but did not make the floor of the Senate. President Biden has pledged not to raise taxes on individuals earning less than $400,000 a year though this refers to income taxes rather than direct taxes.

Taxes could be applied after fuel processing, or upstream as part of the fiscal regime for extractive industries (a small coal tax already exists to fund compensation for black lung disease)—in the latter case, imports should also be covered, and rebates provided for exports. See Calder (2015).

As in, for example, California or the national ETS starting in Germany in 2021.

Again, as in California where the floor price is implemented through a minimum price for auctioned allowances.

For further modelling results on US carbon taxes see Barron and others (2018).

Emissions leakage refers to the increase in emissions in other countries that partially offset domestic emissions reductions—a potential channel for leakage is increased imports in response to contraction of EITE industries. Some studies suggest leakage rates are modest (e.g., Branger and others 2017, Koch and others 2019) while IMF (2021) estimates more sizable leakage rates for some countries but a relatively modest rate of 5 percent in the case of the United States.

The position under WTO trade rules is complex but those rules do not arguably prohibit countries with carbon taxes from adopting non-discriminatory harmonizing measures (such as BCAs) which would reduce the competitive disadvantage that EITE industries face from exports from countries that do not tax carbon emissions (e.g., Flannery and others 2020). However, the position is even more complex when measures specifically seek to rely on permitted exceptions. In this specific case, only reducing carbon leakage is likely to be a legally permissible justification potentially fall within the environmental exception for trade measures like BCAs under GATT Article XX and not protecting competitiveness—limiting the BCA to EITI industries likely further enhances the prospects for legality of permissibility within that exception under trade law (e.g., Flannery and others 2020). This is because trade measures based on environmental exceptions would not be permissible if they result in arbitrary discrimination or disguised restrictions on trade.

Worldwide, only one BCA has been implemented to date, applying to the embodied carbon in imported electricity under California’s ETS (e.g., Pauer 2018).

See, for example, Fischer and others (2015) for a full discussion of assistance measures for EITE industries.

See Dinan (2015) for a comparison of mechanisms at the federal level for compensating low-income households including income and payroll tax rebates, incentives for energy-saving investments, increasing the Earned Income Tax Credit, and strengthening the Supplemental Nutrition Action Program (food stamps) and Low-Income Home Energy Assistance Program. Assistance measures at the state level could also be strengthened. Klenert and others (2018) provide a conceptual discussion of equitable recycling. Measures for displaced workers could center around extended unemployment benefits, training and reemployment services, and financial assistance related to job search, relocation, and health care (see Morris (2016). All these household and worker programs need only absorb a modest fraction of carbon pricing revenues. And on balance, employment gains in clean energy jobs are expected to outweigh employment losses in carbon-intensive sectors (e.g., Garrett-Peltier 2017).

This is despite a strong case on broad environmental and fiscal grounds for substantially higher fuel taxes (e.g., Parry 2011).

See www.nhtsa.gov/corporate-average-fuel-economy/safe. The old and new would cut 2030 emissions of the on-road fleet about 23 and 16 percent respectively (assuming a vehicle life of 15 years and current on-road fuel economy of 30 mpg).

Vehicle manufactures are therefore rewarded for going beyond prevailing fuel economy standards (and penalized for not meeting them)—in this way, the feebate reinforces the CAFE program.

Promoting electricity conservation is still important, even if power generation were fully decarbonized, to ensure demand/supply balance given constraints on renewable generation sites.

Including satellites, aircraft, drones, and remote sensing from vehicles.

There are however various conservation, grant, and technical assistance programs for forestry and agriculture that can indirectly promote sequestration (e.g., USDA 2016).

Periods might be defined as averages over multiple years given that carbon storage might be lumpy during years when harvesting occurs.

Partial exemptions from fees may be warranted for timber harvested for wood products (e.g., furniture, houses) because the carbon emissions (released at the end of the product life) will be delayed, perhaps by several decades or more.

Calculation assumes the planting sequesters an additional 3 tons of CO 2 each year over a 20-year growth cycle with payments discounted at 5 percent. Agricultural land values were equivalent to $7,500 per hectare in 2019 (USDA 2019).

See Mendelsohn and others (2012), Parry (2020) for further discussion of design issues for feebates.

Basing the feebate on emission rates per hectare could be problematic because livestock is land intensive but the emissions per hectare could be smaller than for crops. The feebate could be disaggregated with higher pivot points for beef producers and lower pivot points for crop producers—this might enhance acceptability (by lowering fees for the former) though it would lower incentives to switch from livestock to crop operations.

See Parry and others (2020) for discussion of the rationale for modified feebates for the maritime sector, their design, and quantitative impacts.

The current offset price is below $1 per ton of CO2 and large offset prices that pass an additionality requirement seem unlikely for the foreseeable future (e.g., Fearnehough and others 2018). International offsets also run the risk of being double counted by both the seller and buyer of the offset towards their mitigation commitments in which case they may not reduce global emissions.

See IMF (2019b), Appendix III, for a mathematical description of the model and documentation of parameter values.

Denmark, Norway, Poland, Slovenia, Spain, for example, have implemented these taxes with rates equivalent to around US$5–40 per tonne of CO2 equivalent (e.g., Brack 2015).

Unless otherwise noted, all data in this box is taken from van Reijven and others (2016).

Technology switching is more likely to take the reform of retrofitting existing plants, rather than scrapping plants and building new ones, given that existing steel factories can potentially produce for several decades. Incentives will vary across plants, for example with local fuel and electricity prices..

Cement prices are currently around $125 per ton (www.ibisworld.com/us/bed/price-of-cement/190). 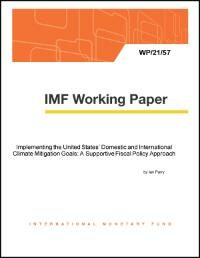 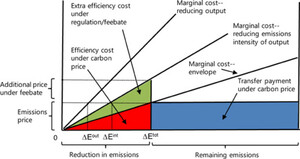