Although GDP growth in the Netherlands has recently been stronger than in peer countries, the main contributor has been the growth in labor. If GDP is divided by labor, productivity growth appears to have been slower than in peers. This chapter discusses both exogenous and endogenous factors behind the disappointing productivity growth in the Netherlands and derives policy implications.

Although GDP growth in the Netherlands has recently been stronger than in peer countries, the main contributor has been the growth in labor. If GDP is divided by labor, productivity growth appears to have been slower than in peers. This chapter discusses both exogenous and endogenous factors behind the disappointing productivity growth in the Netherlands and derives policy implications.

1. The growth of the Netherlands’ GDP has been stronger than in peer countries since 2016. The annual real GDP growth in the Netherlands from 2016 to 2018 was on average 2.5 percent, while the average in the euro area was 2.2 percent and for G7 countries was 2.0 percent.

2. The main contributor to strong real GDP growth in the Netherlands has been labor input growth. Growth accounting analysis shows that more than 60 percent of real GDP growth can be attributed to the labor input, while ICT (information and communications technology) and non-ICT capital combined account for only 15 percent.

3. If GDP is divided by labor input, productivity growth in the Netherlands has been slower than in peers. The annual growth rate of real GDP per hour worked was on average 0.4 percent, less than half of the 0.9 percent for the euro area and 0.8 percent for G7 countries. The qualitative result remains the same if the productivity is instead measured by GDP per person employed.

4. Productivity in the Dutch economy has been studied from different perspectives. A non-exhaustive list of the literature on the Netherlands’s productivity slowdown includes Grabska et al. (2017), who argue that the slowdown in the 2010s may consist of a return to a normal growth rate after the ICT boom in the late 1990s. Bondt (2019) appeals to the increase in the self-employed persons. Jonkers (2019) highlights the increase in total hours worked despite the aging population, and Bun and Winter (2019) explore the increasing capital misallocation arising from a combination of small productive and large unproductive firms.

5. This chapter explores the potential “culprits” of the productivity slowdown of the last decade by looking into each input category and concludes with policy implications. The labor and capital sections analyze the behavior of equilibrium objects in the labor and capital input, while the section of MFP (multifactor productivity) and policy actions includes the analysis of the government policies that could impact long-term productivity.

Note that (1) the productivity growth within each sector is weighted or amplified by the size of the sector, as measured by its labor share, and (2) a positive structural change happens to a sector if the sector’s size measured by its labor share increases (falls) and the sector’s productivity is higher (lower) than the average productivity. If the signs of the two multiplicative terms are, instead, different, a negative structural change is recorded.

8. A significant negative structural change occurred in the finance, mining, and administrative support sectors.2 Firstly, high-productivity sectors such as mining and finance, and to a lesser extent real estate and manufacturing, reduced their shares in total employment. And secondly, expansion took place in low-productivity sectors such as administrative support, and to a lesser extent in accommodation and food. Below are some of the sector-specific developments observed in the three sectors.

9. Note that the analysis of the sectoral decomposition only captures the actual structural change and does not necessarily capture the pressure on structural change. For example, the construction sector has experienced a severe staff shortage amid the ongoing housing boom. As of 2018, nearly 40 percent of entrepreneurs in the construction sector report staff shortage, which is the highest among all sectors where the corresponding number is 25 percent.3 Similarly, staff shortages due to skill mismatches are reported in some of the high productivity sectors.4 Since the employment growth does not catch up with the aggregate demand in those sectors, such pressure on structural change is partly reflected in the sectoral productivity growth.

10. In addition to the structural change, sectoral productivity growth has also been weak. One factor that this chapter explores is the high prevalence in the labor force of flexible work arrangements (FWA) such as part-time employees and self-employed. More than 50 percent of the Netherlands’ labor force is part-time, working less than 35 hours per week.5 The share of self-employment is also high compared to peer countries.

11. The empirical relationship between the share of workers in FWA and productivity is negative. The sectors with a higher share of part-time workers tend to exhibit lower productivity levels and growth. The same pattern can be observed for self-employment.

13. In contrast to the labor input, the contribution of capital to GDP growth has been decreasing over time and is smaller than in peer countries. The average contribution of ICT and non-ICT capital combined between 2016 and 2018 was 15 percent, although it had been 43 percent before 2015 excluding 2009 and 2010.6 The concentration on the labor input stands out when compared with peer countries in Europe. To understand the main driver, this section divides ICT and non-ICT capital into subcomponents.

14. ICT computer hardware and telecommunications equipment, non-ICT R&D and machinery contribute less to GDP growth in the Netherlands than in peer countries. In the latest data, for 2017, a year for which comparable data are available for all the seven peers, nearly 85 percent of the Netherlands ICT capital investment was through computer software and databases. The contribution of R&D, other intellectual properties and other machinery to the non-ICT capital investment was all negative.

15. The nature of the weak investment may be more structural than cyclical. The time-series data suggest that the decline in computer hardware follows a decreasing trend. R&D has also been weaker since 2008 except for a jump in 2015 caused by a transaction made by a multinational firm in the administrative support sector. Weak investment in other machinery and equipment and weapons systems has also been observed since the Global Financial Crisis. Thus, the weak investment seems to be a long-term structural problem instead of a cyclical phenomenon.

16. The sectors with lower investment tend to exhibit lower productivity levels and growth in the long run. Although the direction of the causality is indeterminate, the positive correlation is consistent with the story that low investment in low-productivity sectors is one of the factors behind the slow productivity growth.

17. In connection with the labor market, the sectors with a higher share of workers in FWA tend to exhibit lower investment in capital. Such correlation is consistent with the story that firms in lower-productivity sectors tend to rely more on cost-competitive workers in FWA and have less incentive to invest in productivity-enhancing capital.

19. Policy is one of the most important factors reflected in MFP because any policy that affects GDP growth but does not immediately change labor and capital inputs ends up captured in MFP. For example, the December 2019 Supreme Court decision ordering the government to cut the nation’s greenhouse gas emissions by 25 percent from 1990 levels by the end of 2020 can potentially have a large impact on MFP depending on the way this order is implemented.8 The rest of the section describes three policy areas that affect long-term productivity growth.

20. First, public expenditure on education is in the middle range among peers but grows more slowly than GDP in primary and “other” education. The expenditure made by the general government on education was 5.1 percent of GDP in 2018. Although this number is higher than those in the United Kingdom and Germany, the Netherlands is behind other advanced economies such as Denmark and Sweden. The expenditure has grown more slowly in primary education and other education categories, while it has been more or less flat in secondary and tertiary education. Given that some of the human capital such as ICT skills can be facilitated by both early-stage immersion and vocational training, a more balanced education system that supplies needed human capital will contribute to long-term productivity growth through the reduction of skill mismatches and accumulation of human capital.

22. Third, labor regulations discriminate more severely between regular and temporary workers than in peer countries. As of 2013, the factors that make the Netherlands regulations on regular workers stricter than in peers include (1) the notification procedures in the case of individual dismissal and (2) the length of the trial period. The factors that make the regulations on temporary workers less strict include (1) unlimited maximum cumulated duration of temporary work agency assignments and (2) no requirement on the authorization or reporting obligations for the set-up of a temporary work agency. Such divergence in the labor regulations for different types of contract can be one of the factors behind the high share of workers in FWA, contributing to the duality of the labor market. As discussed by Aiyar et al. (2019), labor market duality could lead to longer recovery and shorter expansion periods after negative shocks, which can then contribute to lower MFP.10 One way to reduce the labor market duality is to establish a structural safety net for all workers including those in FWA, which also allows automatic stabilizers to work properly in the event of economic shocks, including the COVID-19 pandemic.

23. The analysis of productivity growth in the Netherlands suggests that its slowdown is likely to be driven by both exogenous shocks and structural problems. Exogenous shocks, such as the earthquakes and specific policy decisions, have contributed to the shrinkage of high-productivity mining and finance sectors. The structural problems, including the duality of the labor market, skill mismatch, and weak investment, can be addressed, at least in part, by appropriate policy instruments.

24. The analyses highlight several policy options for sustainable productivity growth. Specifically, the Netherlands will benefit from targeted government support to

25. The analysis also sheds light on the resource constraints in both labor and capital inputs. The sectors with higher productivity growth, including manufacturing and construction, tend to face the shortage of staff with needed skills. The unemployment rate as of January 2020 was as low as 3 percent. The capital accumulation has been weaker over the last decades, especially in sectors with lower productivity growth. Further policies to boost labor supply and capital accumulation will benefit the growth of the Netherlands.

See Appendix I for the description of sector labels in the chart.

Ministry of Health, Welfare and Sport (2019) reports that, in 2017, the total greenhouse gas emissions were 12.6 percent below the emissions in the base year 1990.

Duval and Loungani (2019) discuss other consequences of labor market duality.

(Synthetic indicator of 8 items ranging from 1 to 6) 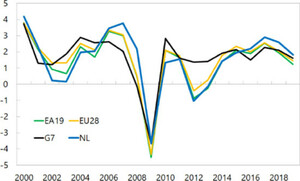 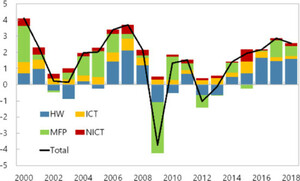 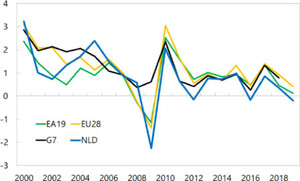 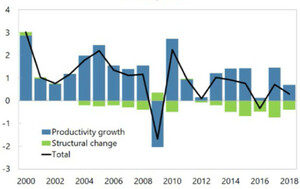 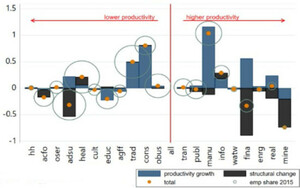 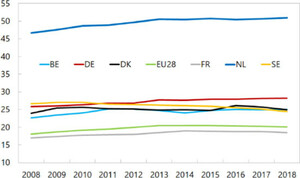 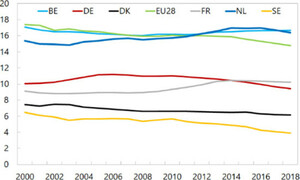 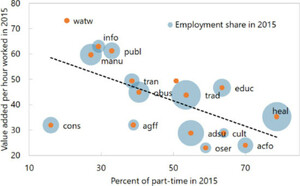 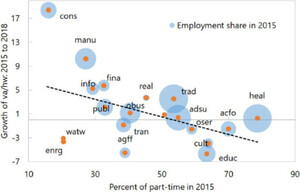 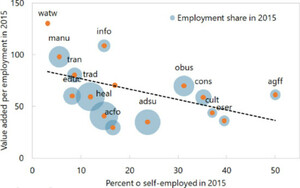 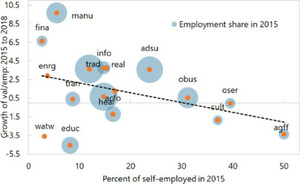 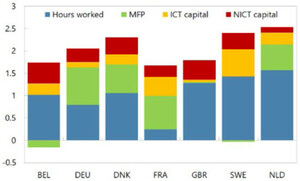 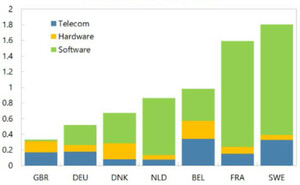 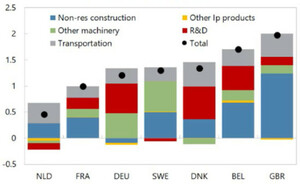 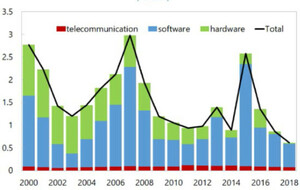 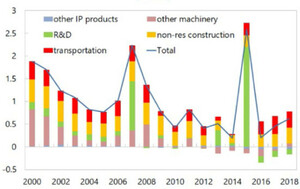 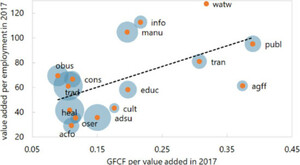 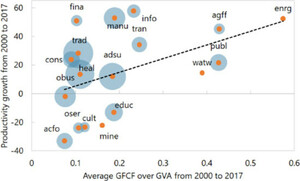 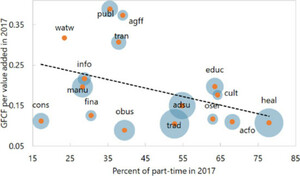 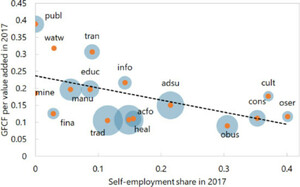 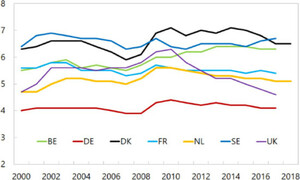 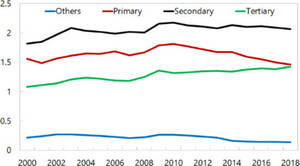 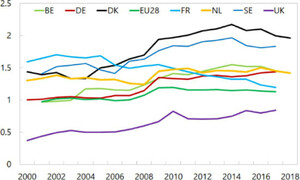 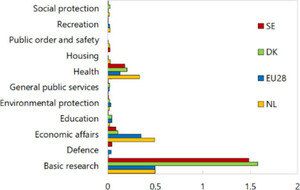