For an overview of ongoing CBDC initiatives, see Mancini-Griffoli et al. (2018), Bank for International Settlements (2018) and Prasad (2018). In a survey of 63 central banks, a third of central banks perceived CBDC as a possibility in the medium term (Barontini and Holden, 2019). Notably, the central banks of China, Norway, Sweden, and Uruguay are actively investigating the possibility of introducing a CBDC. The Sveriges Riksbank is expected to decide on the introduction of an eKrona in 2019, while Uruguay’s central bank has run a successful pilot (Bergara and Ponce, 2018; Norges Bank, 2018; Sveriges Riksbank, 2018a).

See Mancini-Griffoli et al. (2018) for other design aspects of CBDCs, which are mostly of an operational nature, such as the means to disseminate, secure and clear CBDCs.

We parameterize and vary the degree to which bank financing of firms provides efficiency gains. On the special role of depository institutions in intermediation, see Diamond and Rajan (2001) and Donaldson et al. (2018), as well as Merrouche and Nier (2012) for supporting empirical evidence.

This possibility is increasingly enabled by technological developments, as for instance discussed by Yao (2018) in the Chinese context, and forms the basis for the microfoundations that we develop in Appendix D.

A central bank could attempt to mitigate the decline in bank lending by providing banks with cheap liquidity to replace lost deposits. However, this may not be feasible for two reasons. First, banks’ ability to intermediate funds may depend on their reliance on deposits (see e.g., Diamond and Rajan, 2001; Donaldson et al., 2018). Second, this policy would permanently expose the central bank to credit risk.

Beyond satisfying household preferences, the disappearance of cash may reduce economic activity when a portion of the population is unable or unwilling to transact with digital payment methods because of digital illiteracy or informality. See Chodorow-Reich et al. (2018) for an empirical assessment of such costs.

In our framework, CBDC interest rates embody any type of subsidy or cost associated with holding CBDC. For example, the pilot conducted by the central bank of Uruguay offered subsidies to CBDC holders (Bergara and Ponce, 2018). Moreover, we focus on the steady state effects of CBDC rates on financial intermediation and cash use, rather than their implications for monetary policy over the business cycle. On the relationship between CBDC and monetary transmission, see Agarwal and Kimball (2015, 2019), Assenmacher and Krogstrup (2018), Barrdear and Kumhof (2016), Bordo and Levin (2017), Bjerg (2017), Davoodalhosseini (2018), Goodfriend (2016), Meaning et al. (2018), and Niepelt (2019).

The role of strategic coordination and adoption equilibria has also been considered in the literature on cryptocurrencies (Biais et al., 2019, 2018; Bolt and Van Oordt, 2019).

We abstract from default risk on bank deposits, which is negligible in normal times due to deposit insurance and implicit bailout guarantees.

While some legal jurisdictions allow for deposit accounts that offer a degree of anonymity, these accounts are typically incompatible with payments services. Moreover, providing anonymity in deposits may undermine their complementarity with relationship lending (see e.g., Donaldson et al., 2018).

We adopt a uniform distribution for the sake of tractability. Our qualitative results generalize to any single peaked distribution with continuous support and sufficient weight in the tails to ensure that, absent a CBDC, both deposits and cash are sustained as payment instruments.

We assume that all forms of money are traded on par.

This notion is further explored in Appendix D, which provides an example of how a Hotelling linear-city setup of payments preferences can be microfounded.

This can be interpreted as a zero-capital central bank: any revenue that the central bank makes is immediately paid out to households, and any capital shortfall arising from CBDC costs directly leads to a recapitalization through a lump-sum tax.

The manner in which we combine consumption with payment preferences bears similarity to the utility function adopted in Gopinath and Stein (2018).

See Appendix C.3 for an extension where we allow for market power in the bank loans market.

We impose the restriction k0 > 1 to ensure that lending frictions always bind such that k < k0.

We adopt a quadratic functional form in the interest of tractability. Appendix C.1 considers a constant returns to scale technology as an alternative. In a derivation available upon request, we also generalize the quadratic technology to the form and show that results are robust to varying Γ.

The liquidation value is also in terms of consumption goods. The liquidation of projects can be microfounded in a framework similar to Stein (2012) where projects are sold to outside buyers with a lower marginal valuation. While we do not explicitly incorporate outside buyers into our model, doing so would have no impact on welfare provided these buyers are non-resident and/or projects are priced at their opportunity cost to outside buyers. In the interest of tractability, we also assume that funds from liquidated projects cannot be used towards financing other projects. This could be due to a combination of information asymmetries and timing. For example, the time required for outside buyers to verify and pay for a project may exhaust the time for implementation by firms.

An implicit assumption in our model is that the central bank does not allow any agent to take a short position in CBDC (i.e., the central bank does not grant CBDC credit to other parties). This precludes arbitrage opportunities by entities without payment preferences, such as banks, which might prefer funding themselves with CBDC rather than deposits. Based on CBDC studies currently underway at central banks, we consider this a realistic assumption.

The design constraint subsumes two conditions, rcbdc ≥ – (1 – θ) ρ−1 and θ > ρ(rd – rcbdc), which respectively rule out the strict dominance of CBDC by cash and deposits (i.e., ensure that neither cash nor deposits offer all households a strictly better utility than CBDC) as per (5) and (7). For example, a completely cash-like CBDC (θ = 1) that pays negative rates (rcbdc < 0) would violate the first condition, such that all households have a strict preference for cash over CBDC. Because of network externalities, these conditions are necessary, but not sufficient, for positive CBDC take-up.

While our model is not quantitative in nature, empirical evidence suggests that network effects only begin to play a significant role when the use of a payments instrument becomes very small, as respresented by . For instance, in Canada, cash is widely accepted although only about 10 percent of transactions in value terms are conducted with cash (Engert et al., 2018). In contrast, in Sweden, where network effects on cash are becoming a source of concern, cash use stands near 1 percent of transactions value (Sveriges Riksbank, 2017). We discuss the outcome when cash demand is too low to sustain cash, even absent the introduction of CBDC, at the end of Section 3.1.

The restriction (A – ϕ) > 1 ensures that aggregate output (and hence consumption) increases in financial intermediation in equilibrium. This follows directly from the derivative , which, given k ≤ 1, is always positive for (A − ϕ) > 1.

The three equilibria referred to as never occurring under optimal policy are further discussed in Appendix C.4, which considers outcomes under suboptimal CBDC design. The equilibria referred to as “impossible under any policy” are ruled out by the parameter restrictions which imply that, when there is no CBDC, the lowest possible shares of deposits and cash, respectively, are and , both of which are above s. The derivations for these results are available upon request.

Resolving multiplicity in favor of the cashless equilibrium shifts the boundary condition to θ + ρrcbdc > 1 – 2s – g (0) without any qualitative impact on our analysis.

The design constraint (15) is slack under optimal policies as per Lemma 2.

Given (17), these optimal policies can range between and .

This is formally derived in Proposition 1 below.

In addition to optimal policy derived in the Proof of Proposition 1, the exact shape of Figure 2 relies on two more properties from (36) and (37): first, θnce > θce; second, and therefore the slope of θnce is flatter.

Appendix C investigates the robustness of this key result. We find that the optimality of zero CBDC rates (absent network effects) is robust to the specification of the production function. However, when banks have market power (Appendix C.3), or when anonymous payments instruments create negative social externalities (Appendix C.2), the optimal CBDC rate can deviate from zero.

See Appendix B for the underlying derivations.

This also remains valid in nce where and .

Formally, we can verify that by noting that in (50) when A – ϕ → 1 the expression becomes and when it becomes , both of which are smaller than 0 given and θ ≤ 1. Hence, always holds over the parameter space in (17).

Given that each individual agent is atomistic, the space of all agents excluding one agent remains defined on [0, 1].

The same holds for the nce solutions. These are not shown here in the interest of brevity, but are available on request.

See also Garratt and van Oordt (2019), who develop a payments model with privacy as a public good, where each consumer fails to internalize that her payments data is used to price discriminate among future consumers, and privacy in government issued electronic cash can create social value.

More generally, the underlying assumption can be seen as a requirement on deposit-opening households to reveal their income to the fintech provider. 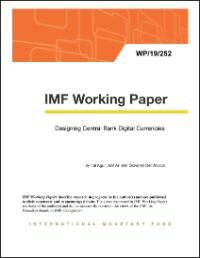