The discussion on provision priorities and modalities heavily draws from previous work by the World Bank, UN agencies, and local think tanks.

A score of 80 means that a country is 80 percent of the way to the best outcome.

The costing exercise focuses on annual spending flows in 2030. However, spending would have to rise before 2030, so cumulative expenses up to 2030 would be significantly larger. After 2030, education and health spending would recur, whereas infrastructure spending would be expected to decline to cover depreciation of the capital stock built through 2030.

In Guatemala, education spending in 2030 consistent with good SDG performance is 7 percent of GDP. This is higher than in good performing countries today reflecting a higher projected share of student age population and higher target enrollment rate.

Secondary education in Guatemala comprises three years of general education (basic), and two to three years of vocational training (diversified) that prepares students for a career in the technical, agricultural, commercial, industrial, or teaching domains.

Between 2009 and 2015, approximately 20 percent of preprimary and primary school teachers graduated from this program.

Throughout this section, basic or primary-level healthcare refer to the provision of vaccination, and maternal and child healthcare including basic nutrition. Secondary- and hospital-level healthcare respectively refer to diagnostic services and specialized care, and cure and care rehabilitation, for the entire population.

The Transparency Law from 2013 stated that, starting in 2016, NGOs would no longer be able to receive government funds for the delivery of healthcare services, as foreseen by the Program to Expand Coverage in place since 1997. Since then, health policy debates have focused on how to achieve universal coverage.

Such transformation was already envisaged in the Organic Law of the IGSS of 1946.

The network layout is based on a combination of the Salesman (circuit-type route between various points) and Steiner (minimum-cost route for a set of given points) connectivity methodologies. The network connects villages of 250, 1000, and 5000 inhabitants, configuring three types of national, secondary, and tertiary networks.

To ensure that the largest share of additional revenue from a tax reform goes to social spending, there is a need to tackle revenue earmarking (see paragraph 36).

Support is being provided by the European Union and the World Bank, with the CICIG as an observer. The census aims, inter alia, to identify and eliminate ghost positions in the public administration. 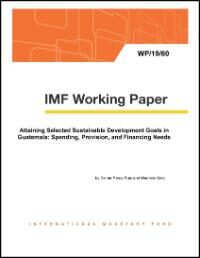