We thank JaeBin Ahn, Diego Cerdeiro, Luis Cubeddu, Russell Green, Hiau Looi Kee, Andrei Levchenko, Maurice Obstfeld, Jonathan Ostry, and Petia Topalova for their generous comments and feedback as well as Steven Wu Chaves for excellent research assistance. The views expressed in this paper are those of the authors and do not necessarily represent the views of the IMF, the IDB, their Executive Boards, or their management.

International trade in services is generally associated with higher costs than manufacturing trade because it is more sensitive to natural inhibiting factors such as geographical distance and cultural differences; it can also face high policy-related barriers, including regulatory requirements (Miroudot, Sauvage and Shepherd 2013).

According to Governor Carney of the Bank of England: “One cause of global imbalances is the uneven playing field between trade in goods and services, with barriers to services trade currently up to three times higher. . . . Most of the world’s major surplus economies, like Germany and China, are net exporters of goods and benefit from this asymmetry. Conversely, countries with comparative advantage in services, like [the] US and [the] UK, are more likely to run current account deficits.” (“A Fine Balance,” speech at the Mansion House, London, 20 June 2017.

Anderson and Neary (2005) explain that the choice between frictionless and actual trade weights is equivalent to the choice between Laspeyres and Paasche price indices; the former index relies on a fixed basket, whereas the latter fully reflects the substitution that occurs following a price change.

Another related strand of literature focuses on understanding the costs to trade in services. For example, Ger-vais and Jensen (2013) and Anderson, Milot, and Yotov (2014) examine services trade within the United States and between the United States and Canada (respectively); these authors find that geographical distance is itself a substantial impediment. Our paper’s approach is also similar to that of Anderson et al. (2015), which estimate a structural gravity equation using detailed data on services trade and production.

Any home bias in product preferences would appear in the source country-specific variables (e.g., ).

In Section 3.2 we shall incorporate directional observables into the structural gravity estimation.

These series on exchange rates, along with all of the current account regressors (except for those pertaining to trade costs), are available from the External Balance Assessment website (https://www.imf.org/external/np/res/eba/data.htm).

The results for common currencies might not be generalizable because the eurozone is our sample’s only currency union.

To preserve space, these figures report only those estimates that use lagged trade weights and are based on the Johnson and Noguera (2017) data set.

However, this hypothetical scenario of a 10 percentage point decline in the costs of exporting is not a counterfactual based on a full general equilibrium because it does not take into account any wage or price responses. It also does not incorporate a commensurate reduction in the country’s costs of importing.

We also try including a bilateral measure of temporary trade barriers, as described in Section 2.2. We find that this variable has little explanatory power, which is not surprising in light of the small share of trade flows affected by such barriers.

There are two other reasons for excluding bilateral tariffs in our baseline gravity estimations. First, doing so would reduce the sample size because we have no bilateral sectoral tariff data before year 1995. Second, our baseline specification is more flexible in that it does not require that the import demand elasticity of tariffs be the same across importer-exporter pairs.

We also examine the role of safeguards—a type of temporary trade barrier that is applied unilaterally by importers—and find that its coefficient is not statistically significant.

Some of the measures underlying the OECDs indices apply to both domestic and foreign firms. Such across-the board barriers could worsen a countrys comparative advantage through their adverse impact on productivity of domestic firms and may not necessarily translate into higher trade costs to import. They would, however, constitute nondiscriminatory trade barriers to the extent that they affect foreign firms disproportionally more.

To be consistent with the construction of estimated nondiscriminatory trade barriers, this analysis uses each country’s average STRI relative to that of the US. 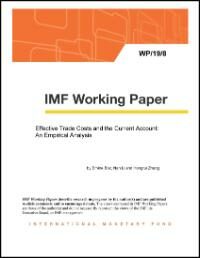