An earlier draft was presented at Japan’s Ministry of Finance and at the Bank of Japan. We would like to thank John Bluedorn, Odd Per Brekk, Benjamin Carton, Paul Cashin, Gee Hee Hong, Benjamin Hunt, Kazuaki Miyachi, Adrian Peralta-Alva, Cyril Rebillard, Masashi Saito, Todd Schneider, Niklas Westelius and seminar participants for valuable comments and suggestions. All remaining errors are our own.

Simulations use a recently updated version of GIMF that includes demographics. See forthcoming IMF Working Paper by Carton and others (2018) for more details.

Throughout the paper, the baseline simulation (or “current policies” scenario) assumes that: (i) BoJ follows a calibrated monetary policy reaction function (see Appendix C for more details), (ii) the planned 2019 consumption tax hike takes place with no subsequent additional hikes or other fiscal consolidation measures, (iii) authorities’ demographic projections and associated fiscal age-related spending projections, (iv) non-age-related government spending remains constant in per capita terms, and (v) female labor force participation and migration do not mitigate the anticipated decrease in the labor force. Note that the baseline simulation is computed relative to a simulation where the economy continues to grow at the average pace observed in 2012- 17 (1.3 percent). Given that 2017 population growth was -0.24 percent, GDP per capita growth is assumed to be close to 1.5 percent, which is the assumed TFP growth rate.

Demographic projections are produced by the National Institute of Population and Social Security Research. Health and pension spending projections follow McGrattan and others (2018). They estimate the impact of population ageing on government expenditure in a closed-economy overlapping-generations DSGE model, using authorities’ demographic projections. In their analysis, McGrattan and others (2018) examine fiscal policy options given the declining and ageing population and find that consumption tax increases that stabilize net government debt are welfare improving (relative to the use of other tax instruments or temporarily higher government net debt).

The direct effect on GDP, consumption and investment from the decline in labor inputs is due to the decline in both population and total hours worked. Per capita GDP, consumption and investment also fall, but by less than their aggregate counterparts. The per capita decline occurs because as households age, per capita productivity growth and hours worked decline as the models assumes that these decline throughout the worker’s lifetime. This assumption is consistent with observed profiles of wages and hours worked in Japan.

Capital declines since the existing capital stock is relatively large vis-a-vis a declining labor input, resulting in a declining return to capital and thus lower investment. Consumers, who ultimately own the capital stock, lower their savings and decumulate capital. They do so at a slow pace since they are expected to live longer and be able to work less hours in their old age.

With lower output, exports fall. Imports fall by less than exports as households support consumption and thus imports by dissaving. The real exchange rate appreciates as the economy requires fewer exports in response to declining imports and potential output.

Parallel results for GDP per capita show that fully credible structural reforms can compensate the decline in GDP per capita (by over 10 percent in around 40 years) due to demographics under current policies.

See for example the Ministry of Health, Labor and Welfare’s “General Survey on Diversified Types of Employment” (2010) or “Trends in Non-Regular Employment in Japan and Analysis of Several Related Themes” (2015) by the Japan Institute of Labor Policy and Training.

The productivity growth increase amounts to 0.3 percentage points per year over twenty years.

Estimate computed as the average for OECD advanced economies for the period 1985–2011.

TPP-11 was signed in March 2018 and ratified by Japan’s Diet in July 2018, and it will come into force in December 2018 as it has been ratified by six (out of eleven) countries in October 2018. Japan and the EU concluded EPA negotiations in December 2017.

While assumptions are made about the credibility of structural reforms, possible commitment devices to achieve credibility are not modeled in this exercise.

This implies, for example, that in the case of increased female labor force participation, agents know that potential growth will be 0.2 percentage points higher every year for twenty years, or in the case of corporate governance reform, agents know that the level of investment will be 5 percent higher after ten years. Hence agents are only surprised by the announcement of the reform plans, and are not subsequently surprised when the reforms take place over time.

This implies, for example, that in the case of increased female labor force participation, agents will observe an annual increase in potential growth of 0.2 percentage points in the first year of the reform and would not expect further increases thereafter. In the subsequent year they are surprised by another 0.2 percentage points increase but do not expect further increases. Hence agents will be surprised each year that the reform takes place.

This assumption implies that private agents update their beliefs’ (increase them) about the Bank of Japan’s inflation target when realized inflation increases above previously expected levels, and is loosely based on the framework of Alichi and others (2009), Demertzis and others (2012) and Davis (2012).

Unlike in the case of structural reforms, the analysis models a specific mechanism to improve the credibility of BoJ’s inflation target.

The black line shows the total impact of the reforms while the difference between the various lines shows the impact of each of the reforms: labor market reforms (blue vs axis), product/corporate reforms (red vs blue) and trade agreements (black vs red).

Return to capital increases because many of the reforms lead to: increases in multifactor productivity (duality, product market and SME reforms); increased size of the labor force (more female, older and migrant workers); or the cost of investment declines (corporate governance reforms).

Absent the assumptions made about the credibility channel, the inflation increase would be temporary, and inflation would return to its initial steady-state in the long run (one percent).

A reduction in tariff and non-tariff barriers lowers the price of imported investment, thereby boosting investment and potential output.

This occurs because Japan has relatively larger non-tariff trade barriers than other signatures of the trade deals.

Cited 15 percent is the difference between the blue and black bars in the GDP panel in Figure 7.

Estimates of the GDP boost for Japan are of the same order of magnitude as those from similar exercises using GIMF and FSGM models for other countries, though somewhat larger. Using GIMF for Italy, Andrle and others (2018) point to reforms that boost the GDP level by 6–13 percent, whereas Lusinyan and Muir (2013), find that announced reforms could boost the level of GDP by 10.5 percent in the long-run. Using FSGM for Japan, Arbartli and others (2016) investigate a less ambitious reform package which includes components of the labor and product market reforms examined in this paper and find that those could boost annual GDP growth by 0.5 percent for five years only (as opposed to the 40 years boost in this paper). The Poland Article IV consultation (IMF, 2017c), using FSGM, points to possible long-run gains between 6.8–11.4 percent from various reform packages.

See for example the Ministry of Health, Labor and Welfare’s “General Survey on Diversified Types of Employment” (2010) or “Trends in non-regular employment in Japan and Analysis of several related themes” (2015) by the Japan Institute of Labor Policy and Training.

Hara (2014) and Higuchi (2013) find that non-regular workers that receive training have productivity improvements that do not result in higher wages but instead on a higher probability of transitioning towards a regular contract. Almost 70 percent of non-regular workers are females.

In parallel, we have assumed unchanged economy-wide wage mark ups. In other words, it is assumed that any wage markup change for regulars is counterbalanced by that of non-regulars.

While the wage gap between regulars and non-regulars is about 40 percent, estimates from Fukao and others (2006) suggest that half of it reflects productivity differences. The rest of the wage gap likely reflects other factors (see for example Hara, 2014 and Higuchi, 2013).

This increase corresponds to an increase in TFP growth of 0.3 percentage points per year over twenty years.

This estimate would be an upper bound if intermediate workers’ productivity is not to reach that of regular workers.

This is consistent with the assumption that overall employment protection legislation remains unchanged for the overall economy.

See Blanchard (1985) for the basic theoretical building blocks and Kumhof and Laxton (2007, 2009a, 2009b) to understand their fiscal policy implications.

Coenen and others (2010) show that GIMF fiscal multipliers for temporary shocks are similar to standard monetary business cycle models, but more importantly, GIMF can handle a much broader array of permanent shocks that can be used to study transitions from one steady state to another caused by permanent changes in the level of government debt.

This feature would disappear if equity was assumed to be traded in financial markets. The assumption of myopic firm behavior, and the resulting equity premium, are more plausible.

An important disclaimer pertains to the assumptions made when introducing the corporate taxes in GIMF (Carton and others (2017)), which were driven by the existing structure of GIMF and by the need to simplify the computational burden of solving the model. Thus, several channels that could affect the macroeconomic outcomes following changes in these taxes are omitted. For instance, one may expect to find that multinational firms may modify transfer prices, relocate patents, change their financial structure, or relocate production towards the country with the less distortionary tax system. In addition to the broad macroeconomic implications, the resulting tax-base shifts could potentially have large implication for corporate tax revenue in different countries. However, because the model’s framework does not incorporate multinational firms, these potential transmission channels are absent. Additionally, owing to simplifying assumptions related to the currency denomination of foreign liabilities, the model-based analysis cannot capture the balance sheet effects of exchange rate movements.

While Sugo and Ueda (2008) estimate Calvo parameters, we map them into Rotemberg parameters.

Note that the Rotemberg parameter is set at this high value in most equations that have nominal rigidities (for tradeables, non-tradeables, final consumption and investment goods and wages). Overall, this implies a high degree of nominal rigidity in the model, as is seen in Japan.

This corresponds with Consensus Economics’ inflation expectations which stood at 0.9 percent for five-years’ ahead and 1.2 for ten years’ ahead as of April 2018. 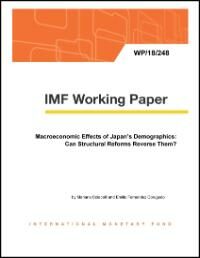 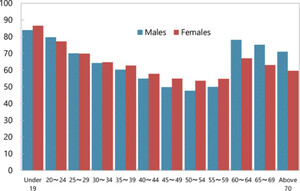 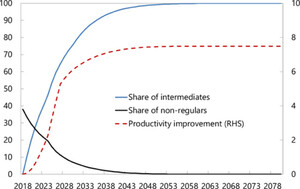 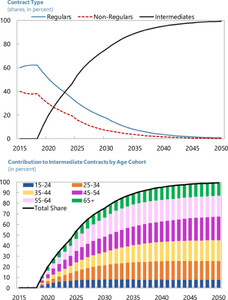 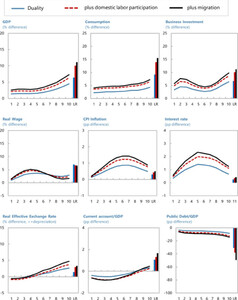 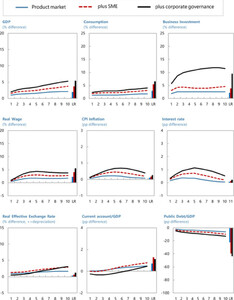