Estimates of potential output and the neutral short-term interest rate play important roles in policy making. However, such estimates are associated with significant uncertainty and subject to significant revisions. This paper extends the structural multivariate filter methodology by adding a monetary policy block, which allows estimating the neutral rate of interest for the U.S. economy. The addition of the monetary policy block further improves the reliability of the structural multivariate filter.

Estimates of potential output and the neutral short-term interest rate play important roles in policy making. However, such estimates are associated with significant uncertainty and subject to significant revisions. This paper extends the structural multivariate filter methodology by adding a monetary policy block, which allows estimating the neutral rate of interest for the U.S. economy. The addition of the monetary policy block further improves the reliability of the structural multivariate filter.

This paper extends the multivariate filter methodology by adding a monetary policy block. This block brings in short- and long-term interest rates (i.e., the term structure), and a monetary policy reaction function to capture policy responses to relevant cyclical developments. This addition provides us with a fuller and more structural description of the dynamics of the output gap, compared to the earlier models in which the policy response was, at best, implicit. The model developed in this paper estimates a deeper and prolonged post-global-financial-crisis output gap compared with the same model without a monetary policy block.

MPMOD is an extension of the multivariate filter model presented in Alichi and others (2017). The original model includes a Phillips curve, a dynamic Okun’s law equation linking the unemployment gap to the output gap (Okun, 1962), and an equation linking the output gap to the Fed’s measure of capacity utilization in the manufacturing sector. The stochastic process for GDP includes a persistent cyclical component as well as two shocks that permanently change the level of potential output (a level shift, and a persistent, though not permanent, deviation from the long-term growth rate). In this paper, we extend that model to include a monetary policy reaction function for interest rate on the one-year government bond and a model for the 10-year government bond yield. This allows us to estimate and project both the short-term (one-year) equilibrium real interest rate and the 10-year government bond term premium.

The details of the model are provided in Appendix A, and only the new monetary block is discussed in this section. The list of standard macro variables includes real GDP, the unemployment rate, consumer price inflation, the Fed’s survey of manufacturing capacity utilization, the one-year government bond yield, and the 10-year government bond yield.

The output gap is defined as the deviation of real GDP, in log terms (yt), from its potential level :

The stochastic process for real GDP is defined by three equations, (2)-(4), and three types of shocks:

Finally, the output gap is a function of contemporaneous and lagged values of the one-year real interest rate gap , which in turn is the deviation of the short-term interest rate from its equilibrium level. The output gap equation also incorporates shocks to trend potential growth and shocks to the level of potential output . The specification intends to replicate the insights from structural DSGE models, where anticipated increases in future productivity growth can, in the short-to-medium term, result in larger increases in aggregate demand than potential output as consumers and firms respond to higher expected levels of future income and demand (Juillard and others, 2007). In the same DSGE models, pure level shocks to potential output that raise productivity once and for all reduce the marginal costs of production and inflation in the short run. GDP is also subject to demand shocks , which raise aggregate demand in the economy by more than potential.

The two shocks in this equation are: ϵrs1Y, t which captures interest rate movements unexplained by all the elements in the reaction function; and ϵπTar, t which is designed to explain interest rate hikes due to the transition from a high to a low inflation regime that happened in the early 1980’s and 1990’s.

The equilibrium real interest rate is modeled as a slow-moving autoregressive process (i.e., with high ), which reverts to its long-run steady-state level and is also subject to a shock :

The model allows the long-term bond yield to shed light on the estimates of the equilibrium real interest rate. Based on the expectations theory of the term structure, the interest rate on 10-year government bonds is the sum of the average of expected future one-year interest rates, a term premium , and a transitory shock to the 10-year interest rate (ϵrs10Y):

The full model, including the new monetary block, is estimated with annual data covering the period from 1980 to 2016. We use annual instead of quarterly data to avoid problems with noise in high-frequency measures of inflation and also because Consensus Economics publishes annual forecasts for GDP growth and CPI inflation. We use 5-year-ahead CPI forecasts as a measure of the perceived long-term inflation target. This information helps to identify the underlying structural shocks of the model and changing perceptions of the inflation target in the monetary policy reaction function.

Figure 1 summarizes the MPMOD results for the United States from 1980 to 2026. For comparison, we have also included estimates of the output gap, potential growth, and the natural rate of unemployment (NAIRU) from the Congressional Budget Office (CBO)4. The CBO, using the framework of a Solow growth model, disaggregates output into five sectors: nonfarm business, households and nonprofit institutions, government, farm, and housing (see CBO papers, 2001, 2014). The output gaps from the MPMOD and the CBO are highly correlated, but the MPMOD’s estimates are larger, on average, by about 0.8 percentage points. The periods of excess demand from MPMOD typically preceded increases in inflation and hikes in the monetary policy interest rate. The two models’ estimates of potential growth are also highly correlated—both move partly with trends in actual growth, with the CBO’s estimates implying higher potential growth in the early 1980s and late 1990s.

Figure 3, Panel 3e illustrates the so-called end-point problem that plagues the HP filter, which essentially extrapolates its last (end point) estimate. Some insight into this behavior can be gleaned by examining the HP filter in a state space representation applied to the log of GDP:

The HP filter decomposes the actual GDP level into trend and gap components (equation 12). The first difference of the trend GDP, its growth rate, is assumed to be a random walk (equation 13), while the GDP gap is assumed to be white noise (equation 14). The smoothness of the trend is pinned down by explicitly specifying the signal-to-noise ratio (Λ, equation 15). From this, it is clear that whenever there is a shift in output growth, the HP filter assumes it is permanent and forecasts accordingly. Unless growth is stable, or the practitioner intervenes to adjust the results in an ad hoc way, this leads to large revisions.6

Figure 4 compares the estimates of the output gap and potential growth of MPMOD with the same model but without the monetary policy block or the associated interest rates and term premium. MPMOD estimates somewhat deeper and prolonged recessions, especially after the global financial crisis. The simultaneous estimation procedure implies that the reaction function and term structure equation have information about the output gap. Thus, the extraordinary easing of policy is explained by the need to fight an extraordinarily large (estimated) output gap.

Figure 5 summarizes the MPMOD detailed results for 1980 to 2026. The implicit inflation target is based on inflation expectations 5-year-ahead from Consensus Economics, available from 1989 to 2017. For 1980, the 5-year-ahead CBO inflation forecast is used. The values from 1981 to 1988 are treated as unobservable and computed from the Kalman filter. The perceived inflation target decreased in the 1980’s and 1990’s, reflecting the Volker disinflation.

Before the global financial crisis, the U.S. economy was operating above potential, pushing inflation up. As a result, monetary policy tightened moderately. The global financial crisis that started in late 2008 pushed U.S. economy into a deep recession. The unemployment rate rose sharply and capacity utilization in the manufacturing sector dropped. In response, monetary (and fiscal) policy became markedly expansionary.7

After the great recession, GDP grew faster than potential and the (negative) output gap narrowed correspondingly. However, the inflation rate has remained below target. Under such circumstances, monetary policy was correctly accommodative. MPMOD estimates indicate that the U.S. output gap is now almost closed and the unemployment rate is almost at the NAIRU. The model suggests that for the next few years the output gap will go positive and the unemployment rate will fall below the NAIRU.

Figures 6, 7, 8, and 9 depict impulse responses to the shocks on: the output gap, the level of potential, the growth rate of potential, and the perceived inflation target.

Figure 7 illustrates a one standard deviation positive shock to the level of potential output. The potential output level shock pushes demand up as economic agents start to consume and invest more, but initially supply rises more than demand and output gap becomes negative. In the Phillips curve equation, the increase in productivity lowers marginal costs, which also pushes inflation down. In response, monetary policy loosens. The short-term interest rate decreases by 0.04 percentage points.

Figure 8 illustrates a shock to the growth rate of potential output , which causes an increase in potential output growth for several periods until the impact fades out and growth returns to its (unchanged) steady-state. As in the previous shock, consumers and firms recognize that their permanent incomes are higher and so increase consumption and investment. Unlike the previous shock, however, potential output does not rise immediately and a positive output gap opens up. Inflation rises and monetary policy tightens.

Finally, figure 9 illustrates a negative shock to the inflation target by one percentage point, which causes monetary policy to tighten. Tighter monetary policy reduces real output temporarily, but it eventually returns to (unchanged) potential. By that point, inflation has fallen to the new target.

For monetary policy, such estimates are critical for managing the short-run output-inflation tradeoff (see Clinton and others, 2015).

The smoothing parameter of 6.25 in annual data is equivalent to using 1600 for quarterly data.

For a discussion of the historical revisions to real-time output gaps published by the OECD and other institutions during the global financial crisis see Turner and others (2016) and Borio, Disyata and Juselius (2016).

For a discussion of the role of fiscal policy see Freedman and others (2009).

Some work suggests that the slope of the Phillips curve relationship (β) has flattened (see for example Chapter 3 of the April 2013 World Economic Outlook). However other studies suggest that it may have steepened in some countries in recent years (Riggi and Venditti, 2014). Although the methodology in this paper does not allow for time variation in parameter estimates, modest changes in the estimated value of the parameter β, on its own, do not materially change the estimates of potential output and the output gap.

Shocks to the Level and Growth Rate of Potential Output, and to the Output Gap 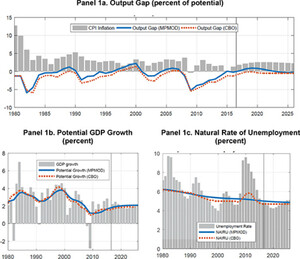 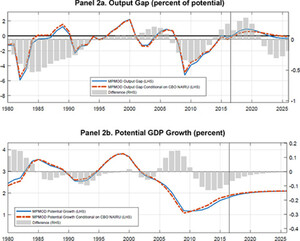 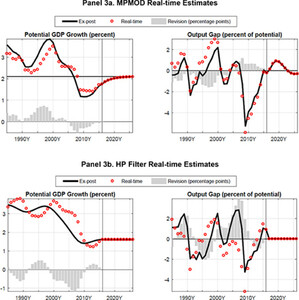 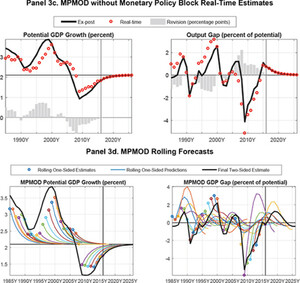 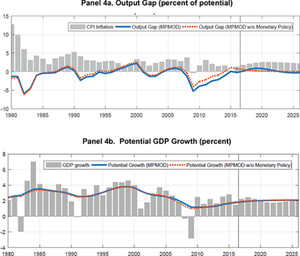 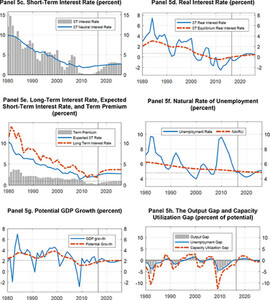 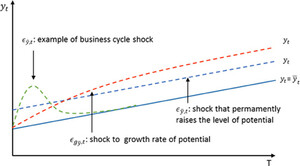 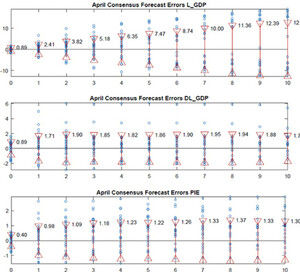 Powered by PubFactory
Close
Table B3.