This paper seeks to quantify the net benefits of a comprehensive reform package aimed at addressing Italy’s inter-related challenges. Specifically, it simulates the growth and competitiveness effects of a package of fiscal, financial, wage bargaining, and other structural reforms. Credible implementation of such a package yields substantial mediumterm dividends at negligible near-term growth costs. Real GDP growth is estimated to be substantially higher over the medium term, while the real effective exchange rate depreciates notably.

This paper seeks to quantify the net benefits of a comprehensive reform package aimed at addressing Italy’s inter-related challenges. Specifically, it simulates the growth and competitiveness effects of a package of fiscal, financial, wage bargaining, and other structural reforms. Credible implementation of such a package yields substantial mediumterm dividends at negligible near-term growth costs. Real GDP growth is estimated to be substantially higher over the medium term, while the real effective exchange rate depreciates notably.

Italy is struggling with modest growth, high public debt, and a banking system burdened with high nonperforming loans and weak profitability. The economic recovery is being weighed down by long-standing structural problems, imbalances, and strained balance sheets. At the same time, restoration of balance sheet health is being hindered in important part by the slow economic recovery. On current projections, growth remains too modest to decisively reverse imbalances and lower debt, leaving the economy vulnerable to adverse developments.

Relatedly, Italy’s competitiveness is assessed to be moderately weaker than suggested by medium-term fundamentals and desirable policy settings. The current account surplus that emerged since 2013 has mostly been the result of import compression caused by a decline in investment and large commodity terms of trade gains. The recovery of exports has lagged, while desirable policy settings to reduce high public debt and medium-term fundamentals, including Italy’s rapidly aging society, imply a higher equilibrium current account balance. Unit labor costs that rose notably in the years following euro accession remain elevated, as wage gains have outstripped productivity. The real exchange rate is estimated to be overvalued on the order of 10 percent.2

Fostering growth and competitiveness and addressing imbalances requires a comprehensive and timely policy response. Such a response would not only address underlying rigidities and imbalances and, thus, unlock growth, but also ensure that public debt and bank nonperforming loans (NPLs) are placed on a firm downward trajectory over the medium term. It could include (i) fiscal consolidation, underpinned by growth-friendly and inclusive measures (see Andrle and others, 2017); (ii) wage bargaining reforms to ensure wages are aligned with productivity at the firm level (see Kangur, 2017); (iii) other structural reforms (e.g., product market, other supportive labor market reforms, and public administration reforms); and (iv) financial sector measures to hasten the cleanup of bank balance sheets and corporate restructuring.

This note uses the IMF’s Global Integrated Monetary and Fiscal Model (GIMF) to simulate the impact of key fiscal and structural reforms on output and competitiveness (Box 1). As the GIMF incorporates monopolistic competition and a rich set of structural rigidities, it can be used to assess the effectiveness of structural reforms. In doing so, this paper relies on the distance-to-frontier approach whereby the gap between Italy and the euro area frontier is assumed to be narrowed over the medium term.3 GIMF also has a well-developed fiscal block allowing for the analysis of fiscal instruments. All other structural policies are phased in over a 5–10-year horizon in a step-wise manner, becoming fully implemented and credible at the fifth year.

Several research papers over the past few years provide guidance on mapping reforms to GIMF. While the fiscal block in GIMF allows a direct relation to fiscal policies, simulating structural and financial reforms requires mapping reform intentions to changes in GIMF structural parameters (such as wage and price markups, labor supply, total factor productivity or TFP, etc.). A growing body of literature on macro-structural and macro-financial interlinkages provides quantitative guidance for such mappings. Table 1 summarizes all shocks, instruments and sources for mapping.

The reform package potentially increases output by 6–13 percent above the baseline and delivers a notable REER depreciation. Figures 1–4 show individual simulation results for the above-mentioned reform blocks. The cumulative results are shown in Figure 5. About one-half of the competitiveness gains over the medium-term stem from structural reforms and, in particular, wage bargaining. This is consistent with the finding that increases in the hourly wage rate accounts for a large part of the ULC-gap against euro area peers (see Kangur, 2017). The other half comes from growth-enhancing fiscal devaluation, spending rebalancing, and the cleanup of bank balance sheets.

The medium-term output gains are substantial, while the short-term output losses are very limited. Upfront implementation of structural reforms is supportive of growth in the near and medium terms and helps offset the relatively small initial output losses associated with the fiscal consolidation. By itself, fiscal consolidation results in lower real GDP that, at its peak, is about ½ percent below baseline after three years. However, taken together with upfront implementation of structural reforms and bank balance sheet cleanup, these costs are offset.

In practice, the yields from the comprehensive reform package outlined above may be smaller. Model uncertainty, measurement error, interim economic shocks, implementation challenges, and the like may reduce the yields of the above comprehensive policy package.5 Thus, it may be more prudent to conclude that growth over the medium term would increase at best by the amounts estimated above.

Complementary judicial, labor protection, and innovation policies could help to ensure that the gains from comprehensive reforms materialize in full.

Italy’s growth and exports have picked up recently, although they continue to lag Italy’s European peers. The real exchange rate is assessed to be moderately overvalued. Further fiscal, financial, wage bargaining, and other complementary structural reforms would raise Italy’s growth rates and unwind remaining imbalances. This paper has quantified a package of reforms to that end, building on the details outlined in two close companion papers (Andrle and others, 2017, and Kangur, 2017) as well as research conducted over previous years. The results point to sizeable gains in output and competitiveness over the medium term, and to very limited short-term losses if implemented comprehensively and decisively.

The IMF’s Global Integrated Monetary and Fiscal (GIMF) model is used to quantify the effects of reforms—see Kumhof and others (2010) and Anderson and others (2013) for more details.

GIMF is a multi-country structural dynamic general equilibrium model featuring Italy, the rest of the euro area, and the rest of the world. It links the behavior of households, firms, and government sector within and among countries. The model has a consistent system of national accounting and stock-flow budget constraints for all sectors, including the government. The model belongs to exogenous-growth types of models, meaning that the long-term growth of output is exogenous. Hence, all fiscal or structural measures may change only the structure of the economy, possibly increasing permanently the level of real output per capita; never long-term growth.

The household sector consists of forward-looking optimizing households, as well as liquidity-constrained households who spend all their available income every period. The forward-looking households are modeled as overlapping generations (OLG) with finite lives, following the Blanchard-Weil-Yaari framework. The presence of OLG households breaks the Ricardian equivalence and is important for realistic results of fiscal policy in both the short and long run. Households gain utility from consumption and disutility from labor effort, they consume traded and non-traded services and goods, receive labor income, transfers from the government, dividends from corporations, and pay taxes—income, consumption, and lump-sum taxes.

Firms produce intermediate and final goods using labor and capital inputs, accumulate capital, and import or export their production. Firms pay taxes from corporate income. Monetary policy in the euro area and rest of the world regions follows an inflation-forecast targeting rule to set policy interest rates. Italy is a member of the euro area.

Government collects tax revenues (consumption, labor income, capital income, and lump-sum taxes) and spends them on government consumption, investment, and transfers to households. Governments target specific debt-to-GDP (and thus deficit-to-GDP) ratios and use a mix of instruments to achieve it. The government’s commitment to sustainable public finance is credible for firms and households, who hold the stock of government bonds. 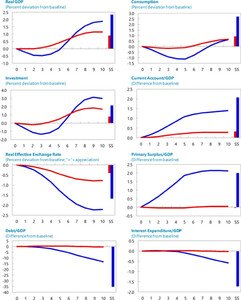 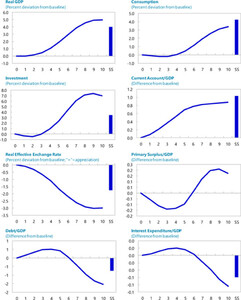 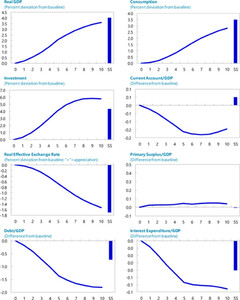 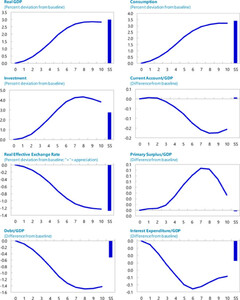 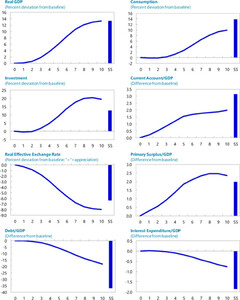 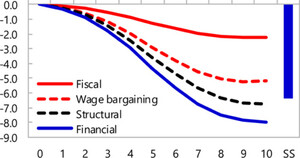 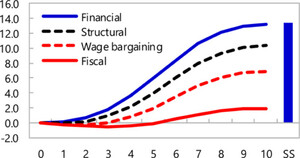