Colombian house prices have increased significantly between 2005 and 2016. In the main three cities of Colombia (Bogota, Cali, and Medellin), house prices rose by around 200 percent in nominal terms (110 percent in real terms) from 2005 to mid-2016 (Figure 1). In addition, some housing indicators (including the housing affordability ratio, the ratio of house prices to rent, and mortgage debt) have reached historically high levels. These developments generate questions about the sustainability of these price increases, and the macro-financial risks associated with potential reversals in the housing and mortgage markets.

This paper estimates the extent of misalignments in house prices relative to fundamentals in Colombia and evaluates the overall risk to the economy from the housing sector. First, the paper documents recent developments in mortgage credit and the housing sector in Colombia. Second, it examines the extent to which characteristics of the Colombian housing finance system could lead to potential fragilities. Third, misalignments in house prices relative to fundamentals are estimated using an error-correction model, relating short-term changes in house prices to a long-term equilibrium relationship, interest rates, and to changes in income per capita and credit growth.

We find some degree of house price misalignment relative to fundamentals which is, however, mitigated by housing finance characteristics. The model results suggest that house prices are around 13 percent above equilibrium. Nevertheless, after the financial crisis of 1999, the authorities have addressed possible mortgage financing vulnerabilities from the housing market. In particular, there is a ceiling on loan-to-value ratios of 70 percent, mortgages are usually contracted at a fixed interest rate, and there is full recourse on mortgages. Thus, the soundness in housing finance contracts and regulations would mitigate the negative spillovers from a potential correction in house prices.

The paper is organized as follows. Section B presents recent developments in the housing market. Section C describes the characteristics of housing finance in Colombia. Section D examines the misalignment of house prices relative to fundamentals, and Section E concludes.

II. Recent Developments in the Housing and Mortgage Markets

The increase in house prices has been widespread across the country. Figure 1 shows that prices for both new and existing houses have increased in the main three cities of Colombia. Figure 4 shows the evolution of prices for new houses in additional cities. Interestingly, house prices grew at high and similar rates in the seven cities considered: the average home-price index grew by an annual real rate of 5.18 percent between 2005 and 2016, with Bucaramanga having the highest average annual real growth rate (8 percent) and Armenia the lowest (3.4 percent). Notwithstanding, in all the cities house prices tended to show stronger growth for middle and upper income levels (Figure 4).

LTV ratios on new loans vary widely across countries, and a number of countries have used regulatory LTV ceilings to mitigate housing booms or increase resilience against a bust. Recent empirical studies support the effectiveness of LTV limits as a macroprudential tool. Crowe et al. (2011) find that house prices decline between 8 and 13 percentage points after a 10 percentage-point reduction in the LTV ratio. According to Claessens et al. (2012), emerging markets should impose lower LTV limits given that they tend to experience more severe financial downturns than advanced economies. Almeida et al. (2006) indicate that LTV ceilings affect the financial accelerator mechanism by reducing the transmission from increases in income to increases in house prices. Figure 6 shows that the maximum observed LTV ratios in the majority of countries seem to be between 70–80 and 90–100, with a median of 83 percent. It ranges from 70 percent (Colombia, Hong Kong SAR, and Hungary) to 125 percent (the Netherlands). Colombia actually has two limits: the LTV ratio for a loan targeted towards the financing of Social Interest Housing (VIS in Spanish) is of 80 percent, and all other mortgage loans have an LTV limit of 70 percent.6 In Colombia, the LTV ratio is at 53 percent, below the regulatory ceiling.

B. Term to maturity

The maturity of mortgage loans could affect the depth of mortgage markets and house prices by influencing affordability. Intuitively, the possibility of opting for longer maturity loans could increase affordability (through lower monthly payments) leading to an increase in the demand for mortgages and homeownership. Figure 6 shows that the maturity of mortgages ranges from 7 years (Turkey) to 45 years (Sweden), with a median of 25 years. In the case of Colombia, the average maturity of a mortgage loan is 15 years. However, the effective duration is around 6–7 years due to early prepayments.

The way that banks fund the origination of mortgage loans tends to play a role in the rate of credit growth and, consequently, affects house prices and financial stability. For instance, credit growth is usually stronger in an economy in which securitization plays a bigger role than in an economy dominated by bond financing. Mortgage securitization was associated with a deterioration in underwriting standards in the United States, while covered bonds have contributed to safer mortgages in Europe. However, while there is heterogeneity across countries’ funding models, in most countries banks use retail deposits as the primary source of financing. This is also the case for Colombia.

A full-recourse mortgage loan allows the lender to pursue deficiency judgments, i.e., to pursue a borrower’s assets (other than the house securing the mortgage) in case of a default. In contrast, a nonrecourse mortgage implies that the lender has recourse only to the underlying property. Dugyan-Bump and Grant (2008) document that the use of full-recourse mortgage loans has been associated with lower default rates in Europe. Morevoer, Ghent and Kudlyak (2011) and Jagtiani and Lang (2010) show that strategic default rates were higher in those states of the United Sates where mortgage loans are treated as nonrecourse debt. In the case of Colombia, there is full recourse on mortgages.

Figure 6 shows that there is also heterogeneity in interest determination across countries. In the sample collected by Cerutti et al. (2015), variable-rate mortgages are the dominant instrument in 30 countries, and fixed-rate mortgages in 12 countries; while both types are observed in 14 countries. Moreover, variable rates are more common in emerging economies. In the case of Colombia, both variable- and fixed-rates mortgages are offered. However, given the role that mortgage interest rates played in the Colombian financial crisis (see Annex II), most households tend to choose fixed-rate mortgages.

Ellis (2008) suggests that the lack of prepayment penalties in the United States contributed to the increase in household leverage and mortgage indebtedness through cash-out refinancing and second mortgages, which could lead to mortgage market volatility. Most countries allow a partial repayment (typically 20 percent) without penalty. There are no prepayment penalties in Colombia and borrowers frequently make partial prepayments.

Standard models of house price determinants postulate that the growth rate of real house prices is explained by the following factors:

Misalignments in house prices relative to fundamentals are estimated using an error-correction model. In the regression model changes in house prices serve as the dependent variable, and the explanatory variables are meant to capture mainly demand-side factors. The regression takes the following form:

The estimation uses quarterly data from the first quarter of 1994 until the first quarter of 2016. The price measure used is the existing home price index from the BanRep database, and is deflated by the consumer price index (CPI).7 The index measures the quarterly and annual evolution of existing houses in Bogota, Medellin, Cali, Barranquilla, Bucaramanga, Cucuta, Manizales, Neiva, Villavicencio and Soacha. Housing affordability is measured as the ratio of house prices to real GDP per capita.

The econometric results show that real house prices in Colombia show long-run reversion to fundamentals (Table 1). Affordability is negatively related to changes in house prices and is statistically significant: if house prices are out of line with income, there is a gradual tendency for this misalignment to be corrected (about 13 percent every quarter). All of the economic fundamentals have the expected sign and are significant. Better mortgage credit availability and higher income per capita promote higher house prices. Demographic factors do also have a positive effect on house prices. In contrast, the sign of the coefficient for the past growth rate of real house prices is not as expected and suggests that the current growth rate is negatively correlated with the past growth rate. Finally, the regression model seems to fit the data well given that the R-square stands at 0.45.

The macroeconomic implications of a potential house price correction can be assessed using a VAR model. Following Aspachs-Bracons and Rabanal (2011) and Igan and Loungani (2012), the implications of movements in real house prices on GDP, private consumption, investment, and a nominal short-term interest rate are analyzed. House price shocks are identified using the generalized impulse response approach, which has the advantage of being invariant to the ordering of the variables.

The estimation uses quarterly data from the first quarter of 1994 until the second quarter of 2016. The domestic variables of interest are real GDP, real private consumption, real investment, the 90-day certificates of deposit interest rate, and the real existing house price index. All variables are introduced in the VAR in levels after taking natural logarithms, except for the nominal interest rate that is introduced directly in levels. The VAR is estimated using 3 lags.

A house price correction could have significant spillovers to the rest of the economy. Figure 8 shows the impulse responses of the five variables to a negative house price shock. The housing shock leads to a decline in real house prices of 2.5 percent after one period, and a cumulative decline of about 15 percent after two years. Real investment is the macroeconomics variable of highest sensitivity to the shock with an initial decline of 2 percent, and a cumulative impact of -21 percent over two years. Both real GDP and private consumption decline by more than 3 percent (cumulative) after 8 quarters. However, the confidence intervals reported imply that the effect is not statistically different from zero after the 5th quarter for investment, 3rd quarter for GDP and 6th quarter for consumption.

Overall, risks from the housing market seem to be contained. While the results from the VAR model suggest that a negative house price shock could have sizable implications on activity (GDP, consumption and investment), house prices do not seem to be largely above levels justified by economic fundamentals (the average estimated gap is at 13 percent). Moreover, after the 1999 financial crisis the authorities have adopted macroprudential measures such as the use of LTV limits, which together with other housing financing characteristics, limit the vulnerabilities stemming from the housing market. At the same time, the current slowdown in economic activity should decelerate mortgage growth and impact the growth of house prices, which has started to show some signs of weakening. However, the authorities should continue to monitor closely the developments in credit and house price growth.

The quantitative deficit is measured by the number of households that do not have an independent house while the qualitative deficit takes into account the quality and condition of houses and their access to basic services.

The IDB uses a homogeneous approach to estimate housing deficits across Latin American countries. However, the latest estimations are from 2009, and will be updated only in 2018.

Around 30 percent of the mortgages originated in 2016 were subsidized.

The international comparison is based on Cerutti et al. (2015).

Mi Casa Ya also includes an extension for households with an income lower than 2 minimum wages, known as Mi Casa Ya para Ahorradores.

House values limits are defined in number of minimum wages. For 2016, the values are converted using the official monthly minimum wage of US$230.

House Prices by Region and by Income Level

Response of Macro Variables to a House Price Shock (±2 S.E.) 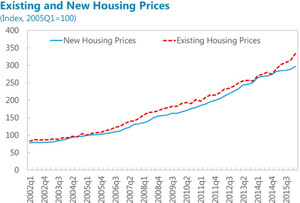 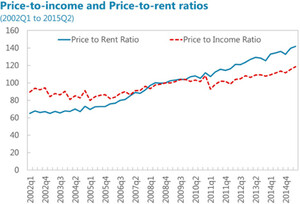 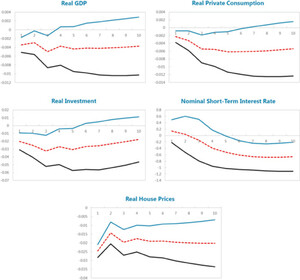 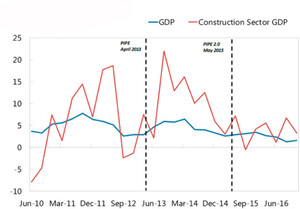 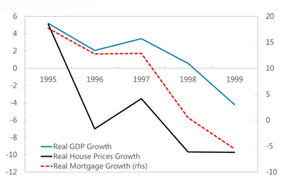