We are grateful to Mark Blackden, Diane Elson, Stephan Klasen, Jenny Lah and IMF colleagues, Andy Berg, Nen Gang, La-Bhus Fah Jirasavetakul, Kalpana Kochhar, Pritha Mitra, Monique Newiak, Cathy Pattillo, Victoria Perry, Jesmin Rahmin, and Genevieve Verdier, for useful suggestions, Carla Intal for excellent research assistance, and Jing Wang and Biva Joshi for excellent administrative support. This paper is part of a research project on macroeconomic policy in low-income countries supported by the U.K.’s Department for International Development (DFID), and it should not be reported as representing the views of the International Monetary Fund or of DFID.

Agenor and Canuto (2015) incorporate into a model of growth how a lack of infrastructure affects women’s allocation of time to formal labor markets.

In our sample, the gross enrollment rate has a correlation of about 0.9 with net enrollment and completion rates in the overall and developing country samples. Nonetheless, there is need for more comprehensive data.

An important goal should be to improve civil registration and vital statistics in countries with poor maternal mortality data to ensure the availability of more accurate data on this key variable.

Another useful variable would be unemployment, but again the data are lacking for this cross-country sample.

Few countries change their broad income classification over time. From sample beginning to end, only 10 countries move from the developing and emerging category to the advanced, and all of these with the exception of Korea are small countries, and altogether they have a minimal effect on the population-weighted averages.

If data are available for only a portion of the five years, we generate the average from the years for which the data were available. Because the indicators change slowly over time, this methodology does not introduce any significant bias; to check, we calculated the average using only countries that had at least half the annual observations for each variable (for child and maternal mortality, all countries would be dropped due to lack of data availability) and found no significant difference in the results.

The bump in the Americas and Caribbean reflects a variation resulting from one country and a small sample size and is thus not meaningful.

The data are available for 4 years, stretched out over an approximate 10-year interval, for each country. We have smoothed the series to construct 5-year intervals.

See Mithra and Farid (2013) for discussion of this issue.

Table 1 of their paper provides a useful summary of the methodological framework for the evaluation of indices.

Our calculation suggests this estimate is high.

Permanyer (2013, p. 7) points out that the developers of the GII fail to recognize that because there are some variables in the index for women only, the index will not take a value of 0 when men and women are equal in other dimensions.

Social Watch has also developed a Gender Equity Index, which we do not review here but is discussed in Gaye et al. (2010) and Hawken and Munck (2013).

Dilli, Rijpma, and Carmichael (2015) and Gonzales, Jain-Chandra, Kochhar, Newiak, and Zeinullayev (2015) also replicate gender indices backward in time in a consistent manner. We term our replications “TC” to signify that they are time consistent and to distinguish them from the UNDP’s own indices.

We split the sample using the World Bank income group classification and then test for unit roots using the Levin, Lin, and Chu and Im, Pesaran, and Shin panel unit root tests in Stata. We do not reject the null of a unit root. We next test for a cointegrating relationship among the variables using Pedroni panel cointegration tests and reject the null of no cointegration. Finally, we run panel dynamic OLS regressions and find that the results vary by income group. The results are available from the authors upon request.

This appendix was prepared by Carla Intal.

Data indicated with – are collected but not yet available.

The number of countries reflects the sample size for the latest listed year of data.

Referred to by UNESCO as “School Life Expectancy: Primary to Tertiary.” 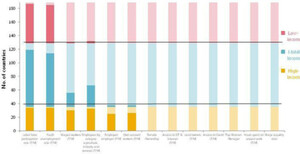 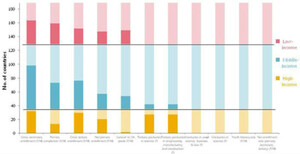 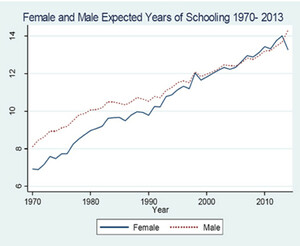 Spearman Rank Correlation Between Different Calculations of the GDI