In recent years, firms in emerging market countries have increased borrowing, particularly in foreign currency, owing to easy access to global capital markets, prolonged low interest rates and good investment opportunities. This paper discusses the trends in emerging market corporate debt and leverage, and illustrates how those firms are vulnerable to interest rate, exchange rate and earnings shocks. The results of a stress test show that while corporate sector risk remains moderate in most emerging economies, a combination of macroeconomic and financial shocks could significantly erode firms’ ability to service debt and lead to higher debt at risk, especially in countries with high shares of foreign currency debt and low natural hedges.

In recent years, firms in emerging market countries have increased borrowing, particularly in foreign currency, owing to easy access to global capital markets, prolonged low interest rates and good investment opportunities. This paper discusses the trends in emerging market corporate debt and leverage, and illustrates how those firms are vulnerable to interest rate, exchange rate and earnings shocks. The results of a stress test show that while corporate sector risk remains moderate in most emerging economies, a combination of macroeconomic and financial shocks could significantly erode firms’ ability to service debt and lead to higher debt at risk, especially in countries with high shares of foreign currency debt and low natural hedges.

Global debt is on the rise again. Since 2007, debt has expanded by $57 trillion, outpacing the growth in global GDP. 2 Emerging markets accounted for half of this new debt, of which one quarter came from nonfinancial corporations. While some of the increase in debt undoubtedly reflects progress in financial deepening and greater access to global capital markets, history has shown that high levels of debt relative to equity in corporate balance sheets could accentuate losses, exacerbate cash flow stress, and heighten debt service obligations. This, in turn, could lead to deteriorating creditworthiness, debt-rollover risks, and higher corporate defaults that could spillover to the financial system.

This paper presents a cross-country analysis of corporate debt in emerging economies in recent years. The analysis is a useful complement to individual country studies, as well as to other analyses of corporate vulnerabilities, for example the contingent claims approach in estimating default risk (Gray et al., 2004), and the construction and applications of corporate vulnerability index (National University of Singapore, 2014). This paper builds on the analysis of emerging market corporate vulnerability presented in the IMF’s April 2014 Global Financial Stability Report. It uses a balance sheet approach to analyze and stress test the resilience of the corporate sector in a sample of emerging market countries to shocks from exchange rate depreciation, earnings decline, and increase in borrowing cost.

Bond issuance by nonfinancial corporates in major emerging market countries has risen sharply in recent years, against the backdrop of ample global liquidity and prolonged low global interest rates. In 2014, corporate bond issuance rose by 10 percent ($77 billion), with Asia leading other regions (Figure 1).3 Foreign currency issuances amounted to one fifth of total issuance over the last five years, growing at a compounded annual rate of 15 percent. According to a recent paper, a large fraction of these foreign currency debts were issued through corporates’ overseas subsidiaries (Chui et al., 2014). The paper also estimated that the rollover needs of corporates from major emerging market countries and their overseas subsidiaries are projected to rise from around $90 billion in 2015, to $130 billion in 2017–18. Sectors such as manufacturing, utilities and energy accounted for three-quarters of the new debt in 2014. In Latin America (Latam) and Europe, Middle East and Africa (EMEA), the energy sector comprised the largest share of issuance, while in Asia, the lion share came from manufacturing.

Slowing growth in emerging markets has put pressure on firms’ profitability. Firm-level data suggests that corporate profitability declined in 2014 across most emerging market countries relative to their five-year averages, with broad-based weaknesses across sectors (Figure 2). The data also shows that debt has grown faster than earnings in most countries, which led to an increase in the ratio of net debt to earnings before interest and taxation (EBIT), and that interest expense grew faster than earnings in all regions.

How vulnerable were emerging market firms in 2014? One way to answer this question is to examine debt service capacity and the share of debt at risk (Appendix 2). Using firm-level data for around 43,000 companies from the Orbis database, we computed the interest coverage ratio (ICR) of each firm and aggregated their debts according to the distribution of their ICRs. Basic statistics are presented in Appendix 3.

Figure 2 presents the results of the exercise. Panel 6 of this figure shows that, in the sample, the average debt at risk rose 22 percent in 2014 from levels in 20106. The figure also shows that the highest levels of debt at risk were in EMEA, and that the pace of increase has been most rapid in Latin America.

It should be kept in mind that the estimate of total debt used for these calculations may be a lower bound. Some corporates in emerging markets are able to borrow abroad through special purpose vehicles (SPVs) or through affiliates, and do not consolidate these exposures on their balance sheets.

While the estimates of debt at risk give an indication of corporate vulnerability at a given point in time, they do not show how sensitive firms may be to macroeconomic and financial shocks. In particular, exchange rate depreciation exposes firms to losses from the higher nominal value of foreign currency debt service; tighter external financing conditions could lead to a rise in borrowing costs; and a slowdown in economic growth could reduce earnings. During the recent Global Financial Crisis (GFC), the three shocks unfolded simultaneously.

To examine the sensitivity of emerging market corporates to those types of shocks, we apply a “stress tests” to the firms’ balance sheets7 using the following shocks:

We also tried to control for “natural” and financial hedges that could mitigate the corporates’ exposures to exchange rate risk. As data on hedges are extremely limited, we made the following assumptions:

Figure 3 presents the results of the stress tests. Panel 2 of this figure shows that the joint occurrence of the three shocks would weaken the ICR of emerging markets corporates; in most cases, however, the median ICRs would remain above 1.5. The figure also shows that the largest impact on ICR occurs in countries where corporates borrow more in foreign currency and have lower natural hedges. This is especially worrisome for countries that have high levels of debt at risk to begin with. In fact, the exercise shows that debt at risk could exceed 50 percent of total corporate debt in Brazil, Bulgaria, Hungary, and Indonesia. For the sample as a whole, the exercise shows that debt at risk could increase from 30 percent of total debt to 45 percent of total debt. Large firms would account for the bulk of the new debt at risk in Asia and Latam. In contrast, in EMEA, one third of the new debt at risk would come from small-and-medium sized firms. The debt at risk analysis also reveals relatively high corporate leverage risk in some countries that are not flagged based on aggregate data.11

The stress tests also show that shocks to earnings, interest rate, and exchange rates could affect commodities-related firms and state-owned enterprises (SOE). In particular, the post-shock debt at risk from the commodities sector could increase sharply in Hungary, the Philippines, Indonesia, and Thailand, though they remain at low levels in these countries.12 In Brazil, the debt at risk from commodities-related companies is high, amounting to around one third of total debt. Our sensitivity analysis suggests that SOE debt at risk could exceed 3 percent of GDP in Brazil, China, Hungary, and Malaysia if these shocks materialize.

Weaknesses in the corporate sector could put pressure on banks’ asset quality through increases in nonperforming loans (Figure 4). The ability of banks to withstand those shocks will depend on the size of their buffers, comprising Tier 1 capital and loan loss reserves (Appendix 4). Assuming that in the stress scenario, corporate debt at risk owed to banks were to default with a probability of 15 percent, our sensitivity analysis suggests that buffers comprising Tier 1 capital and provisioning would be stretched in Bulgaria, India, Hungary, and Russia, when benchmarked against Basel Ill’s minimum capital requirement.13

It is important to recognize that in some countries, bank buffers may be over-stated due to the lax recognition of doubtful assets and loan forbearance. In such instances, higher-than-expected corporate default in a downturn, and loan losses could erode what were thought to be adequate levels of equity capital.

Rising vulnerabilities in the corporate sector should elicit a policy response from the authorities. The response should include:

Emerging market corporate debt has risen sharply in recent years, supported by low interest rates and easy access to global capital markets. While this reflects, in part, welcome progress in financial deepening, high levels of leverage could render firms vulnerable to shocks, especially in an environment of weak economic growth.

This paper uses country-level corporate balance sheet information to investigate this issue. The analysis suggests that corporates in emerging economies are indeed vulnerable to shocks on exchange rates, weaker-than-expected economic growth, and higher borrowing costs. Based on 2014 corporate balance sheet information in a sample of emerging market countries, the stress test exercise shows that a combination of these shocks could significantly erode firms’ interest coverage ratios, though the overall corporate sector risk remains moderate in most countries. The adverse impact on debt-service ability is accentuated where corporates borrow more in foreign currency but have low natural hedges.

Corporate sector stress will affect the banking sector through increases in nonperforming loans. Banking systems where Tier 1 capital and provisioning are low would be most vulnerable.

Keeping emerging markets resilient calls for the need to focus on these vulnerabilities. Policymakers should carefully monitor and contain the rapid growth of corporate leverage through a combination of macro- and microprudential policies. In particular, there is a need to guard against the accumulation of unhedged foreign currency liabilities. Otherwise, the build-up of leverage could, once again, adversely affect financial stability. 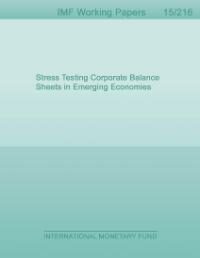 Impact on the Banking Sector 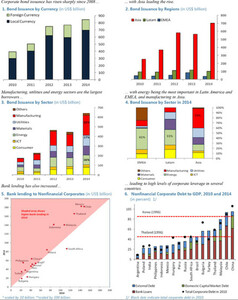 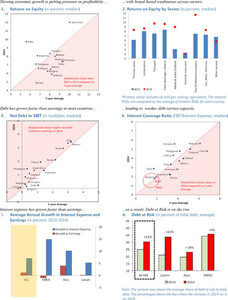 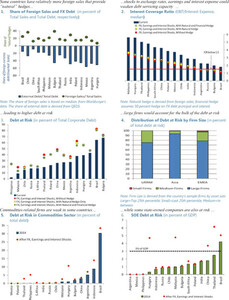 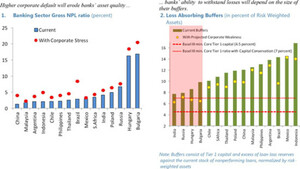