Since Acemoglu, Johnson and Robinson’s (AJR, 2001) seminal paper supporting the link between institutions and development, the debate over the role of institutions on economic growth has spurred much research. Those who are critics of institutionalism are perhaps better represented by Jeffrey Sachs (2003), who has emphasized the prevalence of ecology and geography over institutions in economic development.

However, both sides of such debate have resorted largely to microeconometric techniques in testing hypotheses. There are several reasons for that. The most important one is that complete time series of country-wide institutional quality indicators have only become available in the last fifteen years. This has limited the extent to which researchers can explore dynamics in the institutions-growth relationship since the data are still too scant for individual-country time series analysis. Additionally, although the popularity of panel vector autoregressions has been increasing over the last quarter century2, its use is still remarkably rarer than traditional VARs.

In this paper, I take a macroeconometric approach to the institutions-development debate. I build a panel structural vector autoregression (SVAR) model from equations estimated with Arellano-Bond’s generalized method of moments/instrumental variables (GMM/IV) technique for 119 countries over 10 years.

The advantages of this approach are manifold. By using Arellano-Bond, it estimates unbiased fixed-effects average coefficients for short panels (N > T). The results, then, control for all the time-invariant characteristics that are usually considered in the development literature. They include, for instance: latitude, access to sea, temperature, humidity, language, culture of colonizing power, initial income, etc.

This approach permits the calculation of unbiased impulse response functions (IRFs), which takes full advantage of the information contained in the cross sectional dimension of the sample. Finally, as with any VAR-approach, the model assumes endogeneity of the all variables in the system and can estimate dynamics of purely exogenous shocks.

I estimate the following model:

Since fi is correlated with the error term in dynamic panels, estimation through OLS leads to biased coefficients (cf. Nickell, 1981). To avoid this, I estimate a system of m = 2 equations with Arellano-Bond’s GMM/IV technique3. Each equation has the first difference of an endogenous variable on the left hand side and p lagged first differences of all m endogenous variables on the right hand side.

In its equivalent vector moving average representation (VMA), the Panel SVAR model can be rendered as follows:

where is a polynomial of reduced-form responses to innovations and .

In recovering the impulse responses from the matrices, I follow the method explained by Lutkepöhl (2007). Take the following rendering of the VMA representation of the Panel SVAR:

where Since it follows that and . After factorizing the identity and truncating the impulse horizon to h periods, I can recover matrices of marginal responses ϕj recursively:

To recover structural shocks, I multiply all ϕh by B-1 and then use a bi-dimensional impulse vector s≡[1,0]’ to construct a matrix P of structural responses:

Collecting the first column into a vector (ρ1≡[ρ11,…,ρh1]’), I have the IRF of the of the first endogenous variable to a shock in the first endogenous variable. I then repeat the process until the mth variable and change the impulse variable by replacing vector s above. After recovering the point estimates of all the IRFs, I calculate standard errors nonparametrically through a simulation algorithm with 1000 repetitions (see Appendix for details).

I use GDP per capita data in constant 2005 U.S. dollars from the World Bank’s World Development Indicators as the income variable and the Fraser Institute’s Economic Freedom of the World Index (EFW) as a proxy for institutional quality. The index takes into account five institutions-related subcomponents, namely: legal system reliability, monetary stability, burden of regulation, size of government, and freedom to trade internationally4

I chose EFW for two reasons. First, it is significantly correlated with the risk of appropriation index AJR used in their original paper (t-stat > 7). It is also correlated to other potential proxies for institutions, such as the Economist Intelligence Unit’s Democracy Index or Transparency International’s Corruption Perception Index (CPI), which was used in the robustness section. In fact, the first principal component of those four indices explain about 70% of the total variance, suggesting that those different metrics are measuring similar underlying characteristics. If the index AJR used in their paper or any of the other indices mentioned are a good proxies for institutions, so should be the EFW index.

Second, it provides a continuous annual time series between 2000 and 2012 for a very wide range of countries. Since the Arellano-Bond estimators perform better on short panels (i.e., panels with large N and small T), I wanted to take advantage of the information available from the variability between individuals as much as possible. The large cross sectional dimension of the EFW index fits suit.

The data are organized into a panel of 119 countries and 12 years. The Arellano-Bond framework implies a necessity to transform the data into first differences and use lagged instruments. For such reason, the final estimation sample drops to 10 years, resulting a total of 1190 observations.

The results from the estimated GMM/IV Panel VAR are average responses of endogenous variables to an exogenous shock in any variable after controlling for time-invariant characteristics of individual members. It takes into consideration all the simultaneous dynamics in the system. Since the Panel SVAR is stable, over the long run shocks converge to zero. This means that shocks are temporary and over the long run the series return to their deterministic trends.

I find that, on average, a 1 percent temporary shock in institutional quality leads to a peak 1.7 percent increase in GDP per capita after six years5. The relationship remains positive and statistically significant up until up to 10 years after the shock, though decreasingly so. After the fourth year, uncertainty increases rapidly – as shown by the broadening confidence bands.

One of the setbacks of the GMM/IV approach is that it imposes homogeneous dynamics across individuals. To address this shortcoming, I split the sample between advanced and developing countries. I find that, as expected, the dynamics are indeed different among different country groups.

I test the robustness of the results by replacing the proxy for institutions used in the baseline model. The model design and specification is the same. I replace EFW with the Transparency International’s Corruption Perception Index (CPI), which is a composite index that tries to assess how fair, trustworthy and transparent government in different countries are. When using the CPI as the proxy the response of income to innovations in institutions is also positive and statistically significant.

The peak response of GDP per capita to a 1 percent shock in institutional quality leads is 1.3 percent, slightly smaller than the baseline model. Conversely, peak response of institutional quality to a 1 percent shock in GDP per capita is 0.35 percent, slightly larger than the baseline. They both fall well within the 90 percent confidence interval of the baseline model. I present results in the charts below.

Measuring institutional quality can be problematic, but the consistency in the direction of responses using different proxies suggest that, qualitatively, the relationship between institutions and growth are similar. Such qualitative result is more important than the magnitude of the responses themselves.

I find evidence that exogenous improvements in institutional quality have positive and statistically significant impact on GDP per capita. The model controls for all time-invariant individual characteristics which are usually taken as controls in the economic development literature, does not suffer with endogeneity problem, and is robust to using a different proxy for institutions. Moreover, different proxies tend to be significantly correlated, which suggests results would not be qualitatively different when replacing proxies.

International Monetary Fund (WHD). I thank Maddie Eldridge (2013) for giving me the initial insight that one should try to incorporate the feedback loops between institutions and growth to this debate, which pointed to a VAR-type analysis. I am grateful to Troy Matheson, Alfredo Cuevas, Joshua Hall, Ranae Jabri, Nicolas Magud, Roberto Ellery, Alex Herman, and Leo Feler for their helpful comments. All potential mistakes and omissions are solely mine.

See Canova and Ciccarelli (2013) for a comprehensive literature review.

As explained in Arellano and Bond (1991), the GMM estimators assume E[em,i,t|Z] = 0, where Z is a matrix of instruments which are orthogonal to the error terms, namely lags the variables in the right hand side. For each equation, the moment estimators will minimize the above assumption by changing the symmetric matrix M in [(X′Z M Z′ X′)−1 X′ Z M Z′ Y′] where X is a matrix of all lagged variables on the right hand-side and Y is a vector of the variable on the left-hand side.

Correlation between EFW index and Risk of Expropriation index (AJR’s sample, n = 61) and between EFW index and Economist Intelligence Unit’s Democracy Index (n = 107). Variables were standardized, so the scale is in standard deviations. In all indices, a higher score means better institutions.

Contemporaneous correlation between EFW index and GDP per capita. The chart includes all time periods for all countries (NT = 1571) 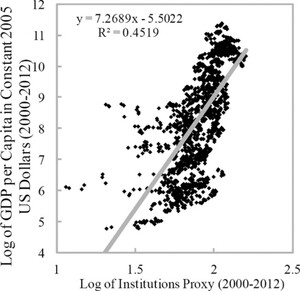 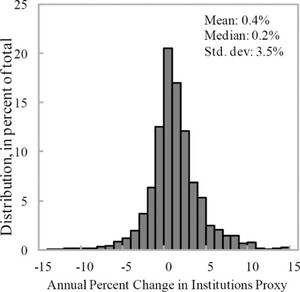 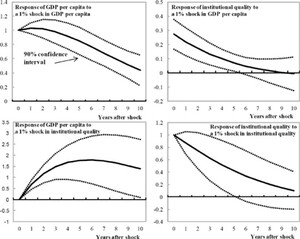 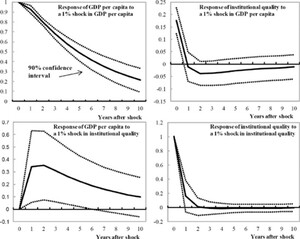 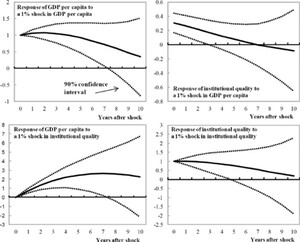 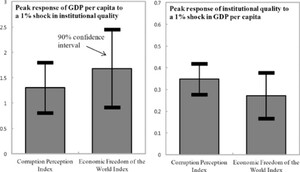