In Ontario, provincially-regulated credit unions are also required to have mortgage insurance in cases where the LTV exceeds 80 percent.

With the adoption of International Financial Reporting Standards (IFRS), the majority of mortgage lenders’ securitization volume is now recorded on balance sheet.

Since 2012, the safety and soundness of the CMHC’s commercial activities have been subject to review and monitoring by the federal Office of the Superintendent of Financial Institutions (OSFI), with OSFI making supervisory recommendations to CMHC’s responsible Minister, the Minister of Finance, and the CMHC’s board of directors.

In the unlikely event of a private mortgage insurer’s winding up, the government would honor lender claims for insured mortgages in default, subject to the 10 percent deductible and any applicable liquidation proceeds.

OSFI is required to undertake examinations or inquiries and report the results, including any recommendations, to the CMHC’s Board of Directors and Ministers of HRSDC and Finance. While OSFI does not have any corrective powers over CMHC, CMHC’s Corporate Plan must contain a proposal indicating how CMHC will respond to OSFI’s recommendations.

CMHC will pay the federal government an additional 3.25 percent of its insurance premiums, plus an extra 10 basis points on the low-LTV insurance that it sells. Private mortgage insurers have been required to pay a similar fee of 2.25 percent of premiums since January 1, 2013.

All the control variables enter equations with lags to account for sluggishness in mortgage credit/house price response to the change of their determinants. This, together with the fact that control variables in the two equations are different, simplifies the estimation of the two equations as the endogeneity/simultaneity issues are not present. Therefore, each equation is estimated separately using the OLS.

The cumulative effect of measures is just the sum of coefficients in vector γ.

This follows Crawford and Faruqui, (2012). The analysis is constrained by important data limitations. There is no publicly available disaggregated data on the different types of credit (especially those that were targeted by the measures). Therefore, the analysis focuses on aggregated measures of mortgage credit.

This follows Peterson and Zheng (2011). Igan and Kang (2011) also use similar specifications for Korea.

To isolate the effect of the specific set of measures, we control for measures that were introduced before that specific set.

Even though the government set a minimum down payment of 5 percent for insured loans, “cash backs,” unsecured borrowing and gifts could have been considered part of the down payment. OSFI’s B-20 guideline from July 2012 stipulates that banks should make every effort to determine if down payment is sourced from the borrower’s own resources or savings.

CMHC (2011) suggests that the volume of refinance loans dropped by 22 percent following the 2011 measures. Dunning (2012) estimates that the 2011 measures would push debt-service ratios above the maximum limit for about 6 percent of the high LTV mortgages taken out during 2010. He also suggests that about 11 percent of the borrowers in 2011 would have not been able to access credit following the latest reduction of the maximum amortization period.

OSFI’s B-20 guideline stipulates that banks should make reasonable efforts to determine if down payment is sourced from the borrower’s own resources or savings. CMHC (2012a) claims that 35 percent of households who purchased a house in 2011 were first-time borrowers and about 15 percent of them borrowed at least part of the down payment.

While we use mortgage credit growth as the dependent variable, the regressions broadly follow the approach in Arregui and others (2013).

Alternatively, we could use the values of macroprudential instruments as independent variables. However, two problems would arise. First, LTVs and DTIs across countries are not comparable, because the structures of mortgage markets differ sharply. Second, the sample size would get much smaller as many countries introduced macroprudential measures only after 2000. A step function variable takes the value of zero before any measure is introduced, but a “value” variable is not defined.

Since we are working here with step variables representing different stance of macroprudential policies across countries, the comparison of the estimated effects of, for example, LTVs in the international context and in Canada is not possible.

It is important to note that simply comparing LTVs can be misleading, as the appropriate or optimal level of mortgage LTV for each country will depend on a number of country-specific factors. Even though international experience is helpful in suggesting additional measures the authorities could consider, it might not provide much guidance on calibrating this measures. Therefore, any policy advice on changing or keeping the direction of macroprudential policy ultimately depends on whether these policies meet their objectives from an individual-country perspective.

Secured personal lines of credit, which are mostly backed by houses (i.e. home-equity lines of credit), have risen sharply both in absolute terms and as a share of total consumer credit. In 1990, secured PLCs represented less than 10 percent of consumer credit; in 2011 their share had risen to about 50 percent (Crawford and Faruqui, 2012).

Mortgage lenders that do not rely on deposits for funding are not subject to prudential regulation.

Under the IMPP, the government permitted CMHC to purchase up to Can$125 billion in NHA MBS to maintain the availability of longer-term credit in Canada following the onset of the global financial crisis in 2008. The IMPP remained available until the end of March 2010. 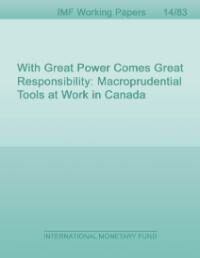