The model used in this paper does not allow determining what part of the ‘gap’ is due to inefficiency (say, evasion) and what part is due to policy issues because of the lack of data to represent both causes. For instance, tax rates as explanatory variables of policy issues must be analyzed with tax bases (regime of depreciation, exemptions, and deductions); a country can have a high CIT or VAT rate and a low level of revenue because of the high level of exemptions and deductions. For this reason, only effective rates could be used as explanatory variables. However, effective tax rates are only available for a very small group of developed counties and for a few years. The same happens with inefficiencies: we do not have a variable to represent inefficiencies in collection (of tax administrations): even the level of evasion is only available for a few countries, a few years, and a few taxes (sometimes the VAT, other times the PIT).

Lambda (σui/σvi) provides information of the relative contribution of vit and uit to the total error term and shows in this case that uit or the inefficiency term is relatively large.

VAT standard rate is 7 percent in Panama and 10 percent in Paraguay, among the lowest in the world. In Paraguay, tax effort would be lower still if the country refunded the tax collected on the re-export trade (people who cross the border from neighbor countries to make purchases).

The relative high level of tax effort in other developing countries can be explained by other factors. For instance, in the case of the Gambia (0.59) and the Kyrgyz Republic (0.78), by the tax collected on re-export trade (people who cross the border from neighboring countries to make purchases).

In this group of countries, non-hydrocarbon tax revenues account for about 27.6 percent of total revenues on average (tax and oil revenues).

The maximum difference of 5.6 percent belongs to Guyana, whose level of tax effort changes from 0.73 to 0.67.

Although some countries, such as Chile and Peru, are not considered in this paper as natural- resource dependent economies (because their mining-sector revenue is lower than 25 percent of total revenue), revenue from this sector is important and, perhaps, this is the main reason why their tax capacities under Mundlack are lower.

In this group of countries, non-hydrocarbon tax revenues account for about 27.6 percent of total revenues on average (tax and oil revenues). 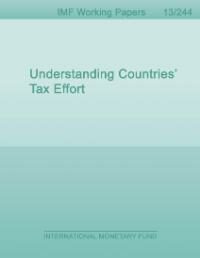 Tax and social contributions as percent of GDP.