Financial conditions indexes (FCIs) have long been used to assess the current state of financial conditions. FCIs are typically constructed using either simple weighted averages or the first principal component of a range of financial indicators. This paper develops FCIs for the United states and the euro area using a wide range of financial indicators and a dynamic factor model (DFM).2 A key advantage of this framework relative to other methodologies is that the FCIs can be estimated when values for some indicators are missing due to publication lags, which allows all available information to be used in a timely fashion.3

In a real-time forecasting experiment, it is found that simple closed economy VARs augmented with the estimated FCIs produce better forecasting performance than a range of other model specifications. It is also found that the revision properties of the FCIs are generally good over the sample period considered. The results suggest that the FCIs can not only provide useful summary measures of the state of financial conditions, but also useful information about the evolution of economic activity in real time.

where χt = ΛFt and ψ, is assumed to be diagonal. The common component is thus simply a scaled common factor, Ft, which is estimated using the entire set of financial indicators. For each economy, the FCI is defined to be this common factor.

The dynamics of the FCI are captured by an autoregressive process:

where the βs are coefficients and p is the lag length of the process. In this paper, the lag length, p, is selected using the Swartz-Bayesian information criteria (SBC). See Giannone, Reichlin, and Small (2008) for a more detailed description of how the procedure deals with missing observations, and Doz, Giannone, and Reichlin (forthcoming) for details on estimation.

For each economy, selecting data from a broad set of financial indicators is a crucial step. Most series are measured at a monthly frequency, with the remainder measured at daily or quarterly frequencies. Before estimation, all series are converted to monthly frequency, transformed to be free from non-stationarity, if necessary, and standardized.4 The remaining indicators are not transformed. The sample period for the FCIs used here begins in 1994. Indicators that are not available for the entire period, such as survey data for the euro area, are backdated using the DFM prior to estimation over the full sample.5

The indicators used in each economy’s FCI and information about how the indicators are classified and transformed is listed in table 1. The table also includes the estimated factor loadings, λ, which reflect the weight of each indicator in the FCI. Each loading can take a positive or negative value, depending on whether a high or low value of the indicator in question implies a tightening or an easing in financial conditions. The Senior Loan Officer Survey (SLOS) data (for which a positive number indicates a tightening of financial conditions) generally have high positive factor loadings. Some of the indicators in the “spreads” category also have high factor loadings, such as the BAA/10-year government bond spread in the United States and the high-yield corporate/10-year government bond spread in the euro area. Negative loadings generally predominate in the “prices” categories, reflecting a tendency for prices to rise when financial conditions ease.

All raw data were sourced from Haver Analytics.
Table 1.

All raw data were sourced from Haver Analytics.

To assess the usefulness of the FCIs, a baseline quarterly closed economy vector-autoregressive model (VAR), including the output gap, headline inflation, and a real short-term interest rate is adopted.6

An out-of-sample forecast evaluation exercise is then conducted for the period from the first quarter of 2004. The VAR forecasts are constructed in two steps in each quarter of the out-of-sample period. First, the FCI is estimated using all data that would have been available at the beginning of the third month of each quarter.7 Second, the FCI is added to the baseline VAR specification and used to forecast all variables beyond the period in which the most recent GDP data would have been available in real time. Using the latest available estimates of the output gap as the target for the forecasts, root mean squared errors (RMSEs) are then computed for forecasts two- and four-quarters ahead.

For comparison purposes, RMSEs are also computed for a variety of other forecasts: an autoregressive forecast (AR); a forecast from the baseline VAR, without the FCI; and forecasts from the baseline VAR augmented with each of the underlying indicators that were used to construct the FCI separately. In each quarter of the out-of-sample period, all models are re-estimated and all lag lengths are re-selected using the SBC. The RMSEs for each model relative to those of the AR are displayed in the right columns of the table 1: a number less than 1 indicates the forecast is more accurate than the AR forecast.

The results are striking. For both the United States and the euro area, the forecasting performance of the VAR augmented with the FCI is good relative to the other models. The FCI forecast outperforms the AR and all other VAR forecasts for the United States. For the euro area, the FCI forecast is at least as accurate as almost all other models, with the VAR augmented with the indicators from the SLOS the only exceptions.

Because the FCIs are estimated and can change with the arrival of more data, it is useful to gauge their revision properties over time. Figure 2 displays estimates of the FCIs based on data available up to March 2011 (in black), along with the monthly estimates of the FCI made each month of the out-of-sample period (in red).8 The figure shows that revisions to the FCIs over time have generally been small relative to their overall variance. Moreover, over this sample, there are very few ‘false signals’, where an initial estimate of an easing or tightening in financial conditions is later revised away. The period around 2008 in the euro area is an exception, with the real-time estimates indicating an easing in financial conditions, which were later estimated to be a tightening in financial conditions.

This paper developed FCIs for the United States and the euro area, estimated using a wide range of financial indicators and a dynamic factor model. In a real-time forecasting experiment, it was found that simple baseline closed economy VARs augmented with the estimated FCIs produced better forecasting performance than a range of other model specifications. It was also found that the revision properties of the FCIs have generally been good over the sample period considered. The results suggest that FCIs can not only provide useful summary measures of the state of financial conditions, but also useful information about the evolution of economic activity in real time.

The author would like to acknowledge comments from Jörg Decressin, Vladimir Klyuev, Alasdair Scott, Krishna Srinivasan, and Emil Stavrev. The paper outlines the methodology behind financial conditions indexes that appear in the World Economic Outlook.

Hatzius, Hooper, Mishkin, Schoenholtz, and Watson (2010) use a similar methodology to construct an FCI for the United States, but do not take account of publication lags at the end of the sample in their forecasting experiment and the real-time revision properties of their FCI are not examined.

The quarterly series are linearly interpolated, whereas the daily series are converted to monthly averages. Quarterly log differences are taken of the non-stationary indicators. Note, the in-sample results are very similar if the FCIs are estimated using quarterly data, but using monthly data offers more timely estimates of financial conditions at the end of the sample in real time.

The assumption that ψ is diagonal is relaxed when backdating these indicators.

Due to a lack of available data, the data vintages the would have existed in real time are not used. Instead, the most recent vintage of data is used to simulate the data available each time a forecast is made. Real-time output gaps and short-term real interest rates are simply truncated from the most recent GPM estimates.

In each month, the end point for the FCI estimate matches that of the GDP data that would have been available at the time.

FCIs and Contributions by Class of Indicator (positive = tightening) 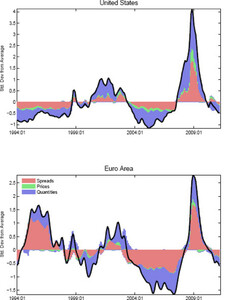 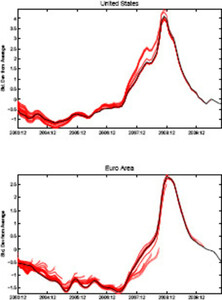 All raw data were sourced from Haver Analytics.