It is well known fact in the growth literature that low inflation contributes to increasing long-term growth, while deflation hampers growth. When the economy is in “full employment” of factors of production the rate inflation should be, by definition, “optimal” in that it is the inflation rate that maximizes economic growth—all else equal. Economists usually refer to the level of real GDP at which the economy is functioning at full employment as potential output. However, potential output is a latent variable, as it is unobservable. As such, it can be estimated but it cannot be observed. Furthermore, there are many different methodologies to compute potential output, each encompassing a different precise definition of potential output.2

Once potential output is estimated, the output gap can be computed. The output gap is an approximation of the deviation in each point in time of observed output from its full potential level.3 If the output gap is positive (negative) the economy’s level of production is above (below) potential. An economy producing above potential tends to exert inflationary pressures. An overheating economy—real GDP larger than potential GDP—requires polices aimed at containing domestic demand while if the economy is below full employment, on the contrary, the country could be better off by growing at a faster rate—at potential GDP.

We also find that as of Q2–2010 (the latest observation in our sample) the output gap in Chile is nearly closed, regardless of the real GDP measure. The natural resource sector seems to be already producing above potential.

This section briefly describes the different models used to compute the output gap and the average growth rate of real GDP for each type of real GDP. For further details, the interest reader is referred to Fuentes et al (2007), Medina (2010), and Magud and Medina (2010).

Four univariate methods have been used. These include a piece-wise linear trend, a Hodrick-Prescott filter, a Baxter and King bandpass filter, and the filtering methods in Christiano-Fitzgerald (2003).

Among the multivariate procedures, we use statistical filters and econometric methods. Three different versions of the Kalman filter have been estimated. The econometric approaches include a production function method, a structural vector auto-regression, and the IMF’s Global Projection Model.

Quarterly data spanned 1986–Q1:2010–Q2. Annual data covered 1960–2009. The variables used in the computation of the latent potential output, and thus the output gap are seasonally adjusted real GDP (aggregate real GDP, natural-resource real GDP, and non-natural resource real GDP), hours of labor, capital stock, and a factor to correct labor for education. These data series were kindly provided by the central bank of Chile. For the Kalman filters, we used the following data from Haver Analytics: central bank of Chile monetary policy rate, the rate of inflation and the unemployment rate.

Figure 3 shows real GDP (aggregate, natural resource, and non-natural resource) and its corresponding trends using the linear trend, the HP, and the BK filters. Some of the estimations show symptoms of real GDP being above trend.

Figure 4 depicts the output gap for each model. The estimation of the aggregate economy’s output gap suggests that these gaps are about to close as of Q2–2010. Most of the estimates depict an output gap not larger than 2 percent of potential output. The Kalman filters suggest the gap to be already closed as of Q2–2010. Some of the univariate filters are very close to a zero output gap too. The production function and the structural VAR still show some slack, yet diminishing and close to zero as well—the SVAR showing the larger gap around 2 percent of potential output. The Kalman filter methodology suggests that the non-natural resource GDP is above full employment, while the output gap is very close to zero in the other cases. The natural resource estimation, using Kalman filters, and most of the univariate and multivariate estimations, suggest a closing output gap in Q2–2010, if not before.

As an example, Figure 5 shows the results for the estimation with the production function approach—the results using the rest of the approaches are available from the authors upon request. We observe a deceleration in potential output starting in the mid-1990s. On the back of the decline in potential growth, however, we find that the contribution of potential natural resource output to potential output growth increased in the 1990s, starting to decline around 1998. It has turned negative since 2005.

Using standard methodologies we have computed potential output for Chile up to the second quarter of 2010—latest observation at the time of writing. We utilized a battery of alternative methods to compute a range of values of the output gap given that potential output, by definition, is not an observable variable.

We find that the output gap is currently close to zero in Chile. The largest estimated output gap is around two percent of potential output. Some measures show an already closed output gap. The estimations of the growth rate of potential output for the sample period averages between 5 and 6 percent. A structural brake has been found in 1998, with an average growth rate of above 7 percent before the Asian crisis and 3–4 percent thereafter.

This paper is a revised and extended version of the paper “Revisiting the Estimation of the Chilean Output Gap,” (IMF, 2010). We would like to thank Pablo Garcia-Silva, Dora Iakova and Robert Rennhack for comments and suggestions, and Juan Pablo Medina and Roque Montero for sharing the data. All remaining errors are ours.

Given data availability, natural resource real GDP includes mining (mainly copper and molybdenum), agricultural goods, and fisheries. About 80 percent of this production is related to mining.

This is consistent with the effects of political stability on faster economic growth, as documented in OECD (2005) and Jadresic and Zahler (2000).

Two lags are used, consistent with the standard lag order selection criteria (Akaike, Schwarz, and Hannan-Quinn). We have also added the price of copper as a third component in the VAR. However, the results were unaltered, so we decided to drop the latter configuration.

Jadresic and Zahler (2000) show that political stability contributes to explain fast economic growth in the 1990s in Chile (in statistically and economically significant way). 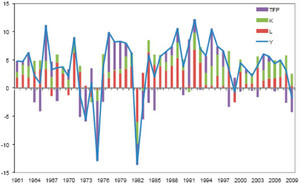 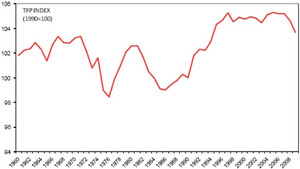 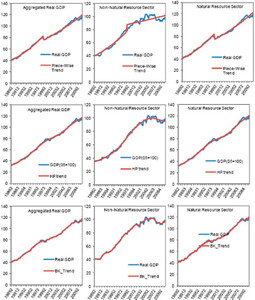 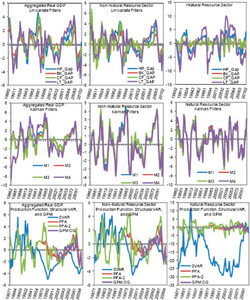 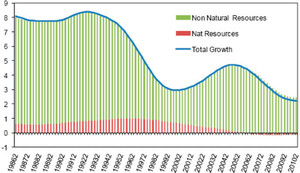 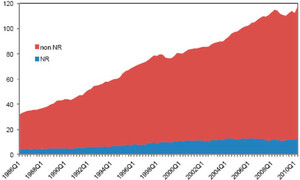