Jump to Content Jump to Main Navigation
Potential Growth of Australia and New Zealand in the Aftermath of the Global Crisis
Author: Ms. Yan M Sun

Using a production function method, this paper assesses the impact of the global crisis on the potential growth of Australia and New Zealand. The two countries have not been hit hard by the global crisis, but have large net external liabilities. The paper finds that the main negative impact of the global crisis is likely to come through higher costs of capital, offset partly by a higher return to capital from strong demand for commodities by emerging Asia. It estimates medium-term potential growth of about 3 percent for Australia and 2. percent for New Zealand, higher than that of many other advanced economies.

Using a production function method, this paper assesses the impact of the global crisis on the potential growth of Australia and New Zealand. The two countries have not been hit hard by the global crisis, but have large net external liabilities. The paper finds that the main negative impact of the global crisis is likely to come through higher costs of capital, offset partly by a higher return to capital from strong demand for commodities by emerging Asia. It estimates medium-term potential growth of about 3 percent for Australia and 2. percent for New Zealand, higher than that of many other advanced economies.

This paper finds that the main negative impact of the global crisis is likely to come through higher costs of capital, offset partly by a higher return to capital from strong demand for commodities. Tighter financial conditions and higher cost of capital in the aftermath of the crisis may weigh on future investment and capital accumulation for Australia and New Zealand. At the same time, strong demand for commodities from emerging Asia, especially for Australia, could increase the return to capital and thereby support investment and capital accumulation. Given the limited increase in unemployment seen in both countries, labor participation and productivity are unlikely to be hurt significantly as a result of the crisis. However, demographic trends imply that growth in the working age population is set to slow modestly over time. On balance, this paper estimates potential growth of about 3 percent for Australia and 2⅓ percent for New Zealand over the medium term, higher than that of many other advanced economies, reflecting partly their strong linkages to fast-growing Asia.

II. Impact of the Crisis on Capital, Labor, and Productivity

The recent global financial crisis has sparked renewed interest in analyzing potential output. Given the “unobservable” nature of potential output, large uncertainties surround the estimate of output gap, the extent and sources of output losses, and future potential growth in the aftermath of a financial crisis. Nevertheless, having a clear understanding on these issues is essential for determining the timing and pace of exiting from the extraordinary policy support implemented in many economies. For example, an under-estimation of potential output loss in the face of large output falls may delay monetary tightening, fueling inflationary pressure. On the fiscal front, an optimistic medium- to long-term potential growth expectation may result in insufficient fiscal consolidation, jeopardizing debt sustainability.

In theory, the financial crisis could affect the level and growth of potential output through a number of channels.

Recent research suggests that financial crises could lead to lower potential growth in the near- to medium-term and large permanent output losses. Cerra and Saxena (2008) estimate a permanent output loss of 4–16 percent following financial crises in developed and less developed countries. European Commission (2009) finds that the recent global crisis will result in a drop of euro area potential growth by ¾ percent in the near-term and a permanent potential output loss of 5 percent. The IMF (2009) also finds that medium-term output losses following banking crises are substantial—close to 10 percent on average seven years after the crisis. Furceri and Mourougane (2009) find that past financial crises have, on average, lowered the level of potential GDP permanently by 1½–2½ percent, with some countries having potential output declining by as much as 4 percent.

A. Investment and Capital

A higher cost of capital may become a long-lasting legacy of the recent global crisis, weighing on future investment. On the supply side, tighter financial regulation and supervision—warranted for stability considerations—may well imply that financial intermediation will not return to the same high level as during the pre-crisis era. At the same time, rising public debt of major advanced economies will significantly raise the demand for credit. The crisis has also led to a general increase in risk awareness among investors, raising borrowing risk premia for many countries, including Australia and New Zealand.

There is scope for central banks in Australia and New Zealand to adjust monetary policy to offset the changes in risk premia, although there are limits to this approach. This was evident during the global financial crisis. Despite the jump in spreads, borrowing costs fell as a result of significant and effective monetary easing, supported by a sound banking sector that weathered the global crisis well.

A simulation of the IMF’s GIMF model calibrated for New Zealand suggests that an increase of real domestic interest rates by 3 percentage points would lead to a permanent fall in the capital/output ratio of 12 percentage points (Box 1). The large jump in the cost of capital should be seen as a tail risk. The impact on the economy of such a large increase is significant, as it results in an almost 40 percent fall in investment after five years and 4½ percent drop in output relative to baseline over the medium term. The table below illustrates the impact of smaller falls in investment, by say 1, 5, or 10 percent that may result from smaller rises in the cost of capital or a lesser impact of the rise in cost of capital on investment. While the impact on potential output is smaller than in the GIMF simulation, the impact is still sizable.

The Fund’s Global Integrated Monetary Fiscal (GIMF) model, calibrated for New Zealand (see forthcoming IMF working paper by Werner Schule), has been used to estimate the impact of a permanent increase in the cost of capital in general equilibrium. The simulations assume a higher permanent sovereign risk premium that raises real interest rates by 3 percentage points and depreciates the NZ$ effective exchange rate (TWI) by 20 percent initially. The hike in real interest rates is much larger than observed recently and the experiment should be seen as stress test rather than forecast. The depreciation dies away as the economy adjusts.

Higher capital costs and lower sales expectations depress investment. As a result the Capital/GDP ratio falls permanently by 12 percentage points. Corporate net worth falls, but firms reduce borrowing by more as interest rates have risen. As a result, the corporate leverage ratio declines.

Demand for commodities from fast-growing emerging Asia, especially for Australia, is likely to raise the return on capital. Specifically,

IMF staff forecasts take account of the higher cost of capital and closer integration with Asia and expect stronger capital accumulation for Australia than New Zealand.

The limited increase in unemployment in Australia and New Zealand during the crisis suggests that trend labor supply is unlikely to be adversely affected by the crisis.

One likely channel for the global crisis to reduce productivity growth in Australia and New Zealand is through higher cost of capital. Estevao and Severo (2010) show that increases in the cost of funds have a significant negative impact on TFP growth, through the channel of poor allocation of factors across firms reducing the productivity of entire industries. Although Australia and New Zealand did not experience a domestic financial crisis, their large external liabilities expose them to higher borrowing costs in the global market. The impairment of human capital, another important factor underpinning productivity, is minimal due to the limited increase in unemployment in both countries.

Looking ahead, Australia’s potential growth is projected at about 3 percent and New Zealand’s 2⅓ percent in the medium term (Tables 1 and 2). The projections should be seen as illustrative given the uncertainties about the impact of the crisis, especially the extent of change in the cost of capital and its impact on investment. Key elements underpinning the potential growth projections for Australia and New Zealand are compared in Table 3. Given inherent difficulties in estimating productivity, trend TFP growth is assumed to remain broadly constant in the coming years. This assumption takes account of the result that trend TFP growth for both countries is found to have stabilized around 0.4 percent during the last five years (Figure 1).

Australia and New Zealand: Contribution to Potential Growth in 2015

Australia and New Zealand: Contribution to Potential Growth in 2015

The difference in the potential growth estimates for Australia and New Zealand (0.8 percentage point) is similar to pre-crisis levels during 2005–2008, and can be explained largely by differences in capital stock growth. New Zealand experienced a much sharper investment fall in 2009 than Australia. Looking ahead, an expected rise in the cost of capital as a result of the global crisis is expected to weigh on New Zealand’s investment and capital accumulation, adding to the pressure on potential growth from an aging population. For Australia, investment is expected to be less affected by a higher cost of capital, thanks to stronger demand for resources and larger terms of trade gains.

Among major advanced countries, Australia’s growth potential over the medium term clearly stands out as the best. This in part reflects Australia’s strong linkages to fast-growing Asian economies (see text charts below). For a similar reason, New Zealand’s growth potential is projected to be slightly higher than that of many other advanced countries. However, at this pace, New Zealand is unlikely to narrow the sizable income gap with Australia.

Potential Growth of Australia and New Zealand in the Aftermath of the Global Crisis
Author: Ms. Yan M Sun 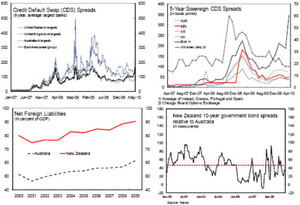 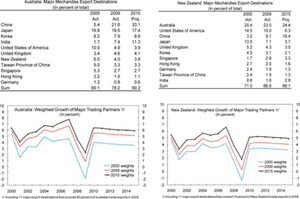 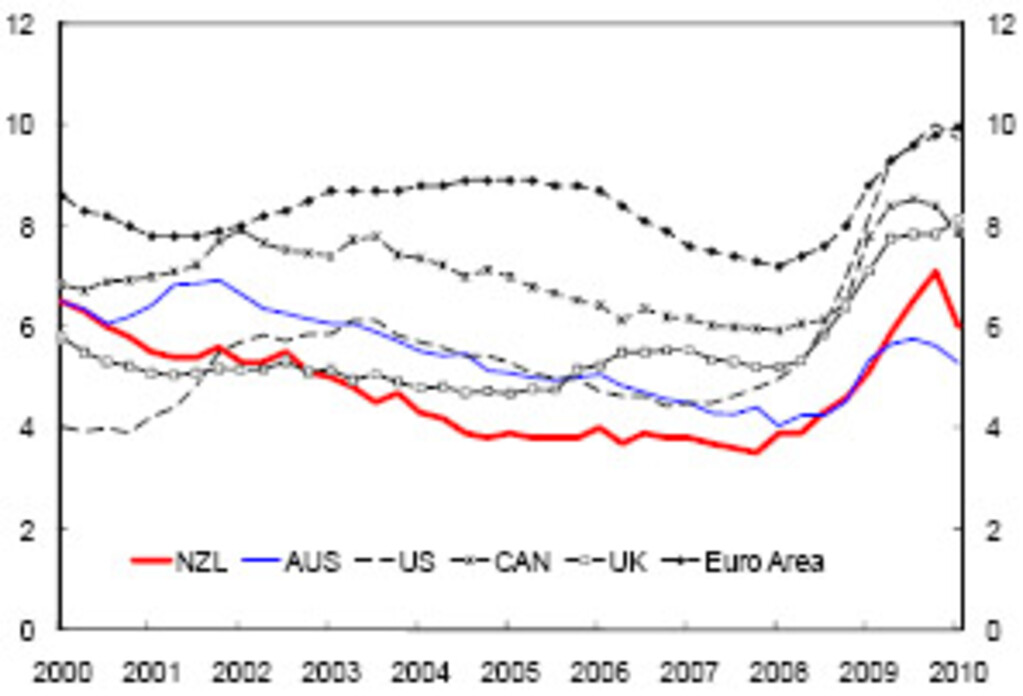 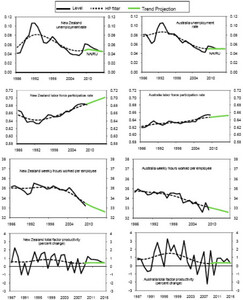 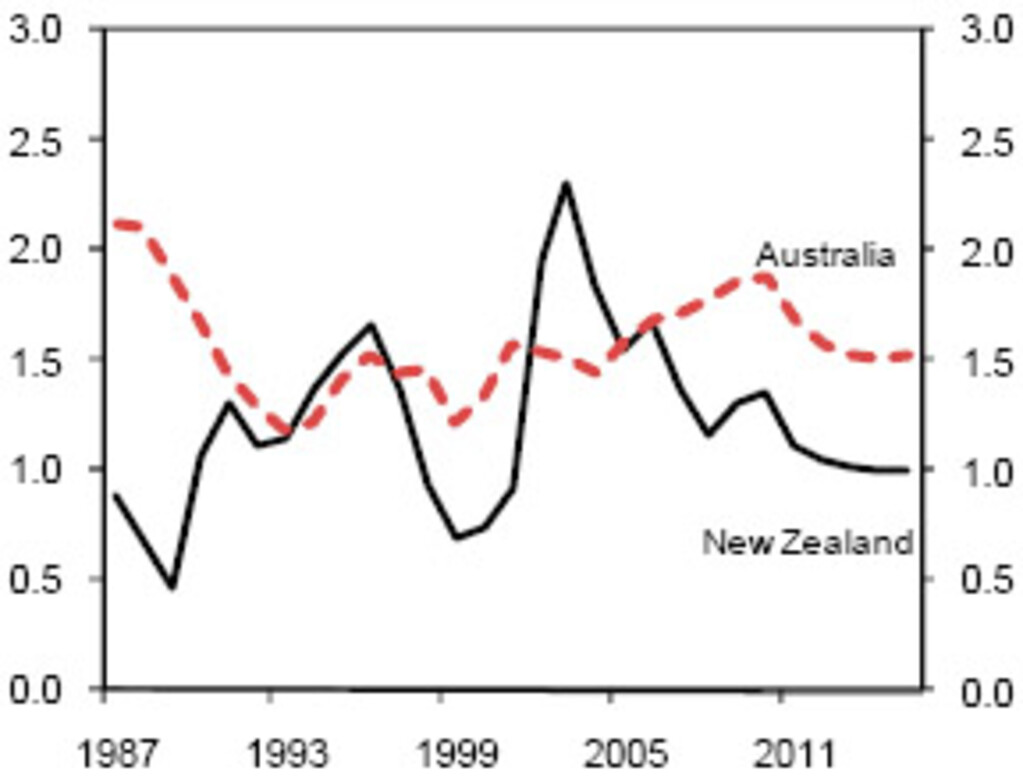 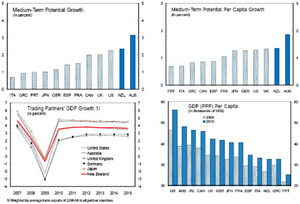