This paper takes a closer look at the prudential and regulatory measures needed to prepare India's financial system to manage the risks arising from fuller capital account convertibility (FCAC). The paper contributes to the debate on FCAC in two ways. First, it reviews the potential and existing financial stability challenges to FCAC in India. Second it studies how prudential regulation and supervision is addressing these challenges. The main conclusion is that regulatory and supervisory measures alone are not enough and will need to be complemented by improvements in Indian banks' risk management and further development of the domestic capital markets.

This paper takes a closer look at the prudential and regulatory measures needed to prepare India's financial system to manage the risks arising from fuller capital account convertibility (FCAC). The paper contributes to the debate on FCAC in two ways. First, it reviews the potential and existing financial stability challenges to FCAC in India. Second it studies how prudential regulation and supervision is addressing these challenges. The main conclusion is that regulatory and supervisory measures alone are not enough and will need to be complemented by improvements in Indian banks' risk management and further development of the domestic capital markets.

There are benefits to fuller capital account convertibility for financial institutions, including increased diversification, greater access to capital, and a broader range of risk management tools. However, policymakers, financial institutions, and their clients typically face additional challenges with fuller capital account convertibility. At about US$104 billion, total foreign bank claims on India are comparable to those on China and Russia. In contrast, Indian banks claims on other countries are four times less than this total. With fuller capital account convertibility, new risks will arise as cross-border transactions increase. Such activities will not only involve different currencies and span many countries but also include on-balance sheet lending and funding, as well as off-balance sheet derivatives and other complex financial transactions.

The preparedness of financial institutions to adequately manage the risks of FCAC depends largely on how well they manage existing financial risks. Financial institutions’ ability to identify, measure, and manage risk will vary depending on the quality of internal risk management and control policies—“the first line of defense.”

Adequate prudential regulation and supervision, and developed capital markets will also be key in addressing the challenges from FCAC. Prudential regulation and supervision will need to encompass the existing and new risks associated with FCAC. In addition, developed capital markets with adequate liquidity, infrastructure, and market discipline are necessary to provide market participants with the relevant risk management instruments.

II. What Are the Existing Challenges to FCAC?

Indian banks’ risk management needs to be improved further to address the challenges from fuller capital account convertibility. The RBI has noted the need to accelerate the speed at which Indian banks have been moving to strengthen risk management systems.5 The Tarapore Report also notes that the skill and competency levels required to manage risks will increase under FCAC and call for a very high level of technical proficiency which at present, it judges to be somewhat limited. Similarly, the recent report of the High Powered Expert Committee on Making Mumbai an International Financial Centre (henceworth, IFC Report, 2007) scrutinizes the regulatory framework that would need to be set in place to enable banks and other market participants to manage their risks.

Public sector banks—which dominate the Indian financial system—view human resources (HR) systems as one of the main area in need of improvement. In a recent survey of banks by the Federation of Indian Chambers of Commerce and Industry (FICCI), almost all (92 percent) public sector respondents voiced that they do not have sufficient autonomy to offer attractive incentive packages to their employee to ensure their commitment levels.

Interest rate and liquidity risk management remains also limited. The RBI has noted that most banks, although they have put in place an ALM framework, have not internalized it as part of their overall risk assessment and capital planning strategy and face data limitations. As a result, the role of asset and liability management committees (ALCO) remains narrowly confined to decisions on interest rates.

The growth of derivatives in the off-balance sheet items of banks needs an accompanying regulatory and supervisory framework. Off-balance sheet exposures (OBS)—mainly derivatives—of Indian banks have grown rapidly in a highly concentrated market. Market activity in the OTC derivatives market has quadrupled from 1998 to 2004, as indicated by the BIS Triennial Central Bank Survey (2005). This market is highly concentrated as combined share of the top 15 banks has steadily grown from around 74 percent in March 2002 to 82 percent of total OBS exposures of the banking system in March 2006, of which 62 percent is accounted for by foreign banks. An adequate prudential and regulatory framework to address risks in derivatives transactions will need to be developed.

The recent Tarapore report also stresses a number of key requirements for FCAC. In particular:

The IFC Report (2007) notes the need for the following measures to be taken to enable commercial banks offer or use risk management services:

III. How Is Prudential Regulation and Supervision Addressing the Challenges From FCAC?

To address shortcomings in interest rate risk management, the RBI has advised the use of impact and scenario analysis of changes in yield structures. Regarding liquidity risk management, the RBI has issued in 2006 draft guidelines to banks advising the use of a duration gap approach (DGA) in conjunction with the traditional gap approach (TGA) prevalent in most banks. In terms of the draft guidelines, banks would be required to compute the volatility of earnings and equity under various interest rate scenarios, and fix internal limits under both and earnings and economic value perspective.

The RBI has taken a number of regulatory measures to address the risks associated with derivatives instruments. These include holding of minimum defined regulatory capital for all OBS exposures, collection of periodic supervisory data and transparency and disclosure requirements. The RBI has also emphasized the need for banks to carry out due diligence regarding customer appropriateness and suitability of products as well as the need to use risk mitigation techniques such as collateral and netting arrangements.

Until recently, the lack of prudential accounting guidelines for derivatives has been a gap in the risk management framework. The RBI has issued in 2006 guidelines for the valuation and accounting of derivatives and more generally banks’ investment portfolio (both 2006) to introduce fair value accounting norms for derivatives broadly in line with international accounting norms (IAS 39) with the objective of bringing all derivative transactions “on-balance sheet” as against “off-balance sheet” as being done currently. Finally, commercial banks and primary dealers are now allowed to begin transacting in single-entity credit default swaps.

The RBI has recently emphasized the need for banks to have robust stress testing process. The RBI has therefore issued draft guidelines on stress testing (2006), which cover major risk areas. Banks are required to conduct stress tests so as to estimate the resources needed to the resources needed to reduce the risk identified and meet the minimum capital adequacy requirement. Banks have been advised to apply stress tests at varying frequencies dictated by their respective business requirements, relevance, and cost. For instance, exposures to sensitive sectors and high risk category assets would have to be subjected to more frequent stress tests.

The forthcoming self assessment of financial sector stability and development will be an opportunity for the authorities to assess the preparedness of the Indian financial system to address the challenges for fuller capital account convertibility. This exercise follows the 2001 FSAP and a number of self-assessments of a number of international standards and codes. It will partly rely on the IMF-World Bank Handbook on Financial Sector Assessment (2005).

In particular, Basel II introduces a greater risk sensitivity in the treatment of credit risk, including that associated with cross-border exposures. For instance, risk weights are currently set by asset class (e.g., government, corporates, banks), and range from 0 percent to 100 percent. In contrast, risk weights will depend on the individual risk rating of each counterparty under the Basel II standardized approach and the ceiling risk weight increase to 150 percent. As a result, the capital requirements for credit exposures, including cross-border portfolios, will depend on the risk weights of individual counterparties, and could potentially increase depending on the quality of the portfolio.

The roadmap to Basel II should provide Indian banks a strong incentive to strengthen their risk management practice. Foreign banks operating in India and Indian banks having presence outside India are to migrate to the standardized approach for credit risk and the basic indicator approach for operational risk, with effect from March 31, 2008. All other scheduled commercial banks are encouraged to migrate to these approaches no later than March 31, 2009.

As recognized in the recent Tarapore Committee Report, financial institutions’ ability to identify, measure, and manage risk will also depend on the availability of instruments to manage risk, the liquidity of financial markets and the quality of market infrastructure, and level of market discipline.

Key segments of the Indian capital markets remain, however, underdeveloped. The term money market is limited and although there is a domestic yield curve for government securities with maturities up to 30 years, its depth and liquidity are limited. The corporate bond market is relatively small and illiquid, and the market for securitized assets has fallen short of expectations. The OTC derivatives market is growing rapidly but its prudential and regulatory framework has just been laid out.

The Indian authorities are addressing a number of these issues. For instance, the RBI set up a Working Group on Screen Based Trading in Government Securities in 2004, and Internal Technical Groups on Money Market as well as on Central Government Securities Market in 2005. The recently passed Government Securities Act allows stripping of bonds into separately-tradable principal and interest payments. The recent report by the High Level Expert Committee on Corporate Bonds and Securitization (appointed by the Minister of Finance in 2006) makes a number of recommendations that should be useful for better risk management.

Going forward, it would be useful to revisit the question of what needs to be done to prepare India’s financial system to manage the risks from FCAC, by taking a closer look at the measures—and the pace of their implementation—that are needed to develop domestic capital markets accordingly. 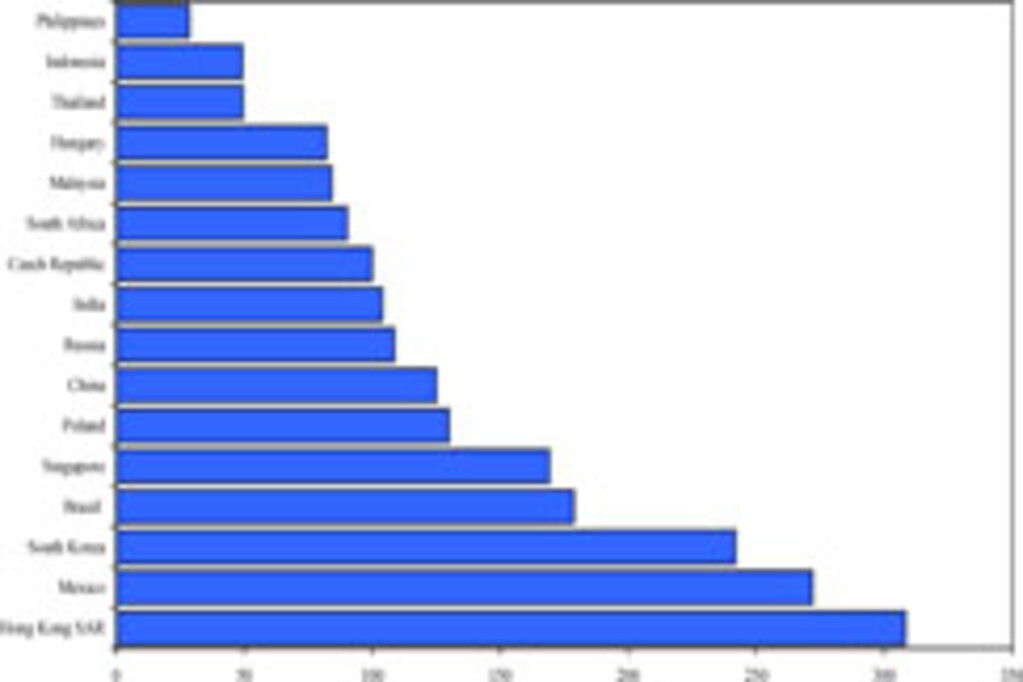