By issuing tax-exempt bonds, the government can incur debt and never pay back any principal or interest, even if the economy without public debt evolves on a dynamically efficient growth path. The welfare effects of such a Ponzi type borrowing scheme are mixed. The current young will unambiguously benefit.Depending on preferences and the aggregate technology, also a finite number of subsequent generations may benefit. The welfare of all generations thereafter, however, will be lower than in the economy without public debt.

By issuing tax-exempt bonds, the government can incur debt and never pay back any principal or interest, even if the economy without public debt evolves on a dynamically efficient growth path. The welfare effects of such a Ponzi type borrowing scheme are mixed. The current young will unambiguously benefit.Depending on preferences and the aggregate technology, also a finite number of subsequent generations may benefit. The welfare of all generations thereafter, however, will be lower than in the economy without public debt.

The Diamond (1965) overlapping generations model may generate competitive equilibria in which the growth rate of the labor force exceeds the long-run return on capital. In these cases the economy is said to be dynamically inefficient and the government can play a so-called Ponzi game. That is, the government can issue bonds and roll over interest and principal from period to period by perpetually issuing new bonds to render debt service. Such a Ponzi game is beneficial as it removes overaccumulation of capital associated with dynamic inefficiency.1

The present note demonstrates that the government can even run a Ponzi game if the economy without public debt is dynamically efficient. This becomes possible when the return on private bonds or equity is taxed and the government issues tax-exempt bonds.2 Unlike a traditional Ponzi game, however, the welfare effects of a Ponzi game based on the issuance of tax-exempt bonds are rather mixed. The current young will unambiguously benefit. Depending on preferences and the aggregate technology, also a finite number of subsequent generations may benefit. Thereafter, however, welfare is lower than in the economy without public debt.

Consider an overlapping generations economy in which at each time t a new generation, referred to as generation t, is born and lives for two periods. In the first period of life individuals supply one unit of labor, consume, and save for old-age by purchasing one period bonds in the capital market. In the second period of life individuals retire and consume out of the proceedings of their savings. The size of each generation is an N multiple of its forerunner, that is N is the economy′s exogenous growth factor.

where γ ≡β/(1 + β) is the marginal propensity to save out of labor income.

Competitive firms finance investment by issuing one period bonds and hire labor to produce a homogenous good which serves for both consumption and investment purposes. Aggregate production of all firms at time t is determined by where A > 0 and α > 0 are technological parameters, Kt is the capital stock at time t, and Lt is the labor force at time t which equals the size of generation t.

Each factor of production is rewarded by its marginal product. Assuming that capital fully depreciates within one period, the gross rate that competitive firms pay on one period bonds at time t thus reads

and the wage rate at time t is given by

The government imposes a capital tax at the rate τ so that the net rate that individuals receive on their savings at time t reads Moreover, at time 0 the government generates additional revenue by issuing bonds in an amount equal to B0. Both, tax revenue and revenue by issuing bonds at time 0 are used for some (wasteful) expenditure which does not affect individual utility.

Rather than paying back the debt, the government rolls over interest and principal from period to period by issuing new bonds at each time t. If such a Ponzi game is feasible, the amount of bonds issued by the government at time t + 1 will equal

Where is the rate paid on one period public bonds.

In contrast to private bonds, public bonds are tax-exempt. Therefore, non-arbitrage in the bond market requires

The evolution of the economy can be characterized by two difference equations determining the dynamics of public bonds and the stock of capital. It is convenient to express both magnitudes in intensive form. Thus, let kt = Kt/Lt denote the capital stock per unit of labor and bt = Bt/Υt the debt-GDP ratio at time t.3 Then, straightforward manipulation of eqs. (1) to (6) yields

III. The Feasibility of a Ponzi Game

Next, it will be analyzed under which condition the government can play a Ponzi game even though γ < α/(1 − α), that is, even though the economy is dynamically efficient. To start with, consider difference equation (8) and observe that it has a unique non-trivial fixed point at

Obviously, is equivalent to γ > (1 −τ)α/(1 − α). Assume that this condition is satisfied and consider the dynamics of the debt-GDP ratio as plotted in Figure 1.

If the government issues bonds at time 0 in an amount which satisfies the debt-GDP ratio decreases over time and eventually becomes zero. In this case, the economy converges to the economy without public debt and a Ponzi game is feasible.5 If, on the other hand, the government issues bonds at the rate the debt-GDP ratio stays constant over time and, again, a Ponzi game is feasible, but the economy will not converge to the one without public debt.

Things turn out to be completely different, if the government issues bonds at time 0 at a rate In this case, the debt-GDP ratio increases over time. At some time in the future the total amount of public bonds necessary to render debt service will become larger than aggregate savings. Then, the young generation at that time will not be able to purchase all the issued bonds and, in turn, the government will not be able to pay the full amount of interest and principal to the then old. As the old will have anticipated this when young, they will not have invested in public bonds. By backward induction it follows that already the young at time 0 will not accept bonds. As a consequence, the government cannot play a Ponzi game at a rate that exceeds

Note that (11) is equivalent to

Compounding the results stated in Propositions 1 and 2, the following corollary can be established.

Condition (12) is equivalent to

In the Diamond (1965) economy a Ponzi game – when feasible – is beneficial as it removes overaccumulation of capital associated with dynamic inefficiency.6 In contrast, under the condition stated in Corollary 1 there is no dynamic inefficiency despite the fact that a Ponzi game is feasible. In fact, a Ponzi game based on the issuance of tax-exempt bonds cannot be generally welfare improving as there is no such thing as overaccumulation.

However, as the next proposition states, a Ponzi game will unambiguously benefit generation 0 and, depending on preferences and the aggregate technology, a finite number of subsequent generations.

Members of generation 0 benefit because they are affected by the launch of the Ponzi game at time 0 only through an increase in the return on their saving at time 1. This is because the wage rate that the members of generation 0 receive when young is predetermined by the stock of capital accumulated at time −1. All subsequent generations are in two ways affected by the Ponzi game. Since the Ponzi game has a negative effect on capital accumulation, it both lowers the wage rate received when young and increases the return on saving received when old. For a finite number of generations the overall result of these two effects may be positive. In fact, the more generations will benefit the larger is γ and the smaller is α. A large γ implies a large saving and, thus, a large benefit from an increase in the return on saving. A small α, on the other hand, implies that aggregate production inelastically responds to a decrease in the capital stock, which dampens the negative effect of a Ponzi game on capital accumulation.

Since the sequence converges to 1, only a finite number of generations will benefit from the Ponzi game if γ <α/(1 −α), that is, if the economy is dynamically efficient (see Proposition 1). All generations born thereafter, in contrast, will be made worse off. This case is illustrated in Figure 2, where vt measures indirect utility of a member of generation t, and, as a point of reference, measures indirect utility on a growth path without public bonds (see the Appendix for the exact form of indirect utility; in Figure 2 it is assumed that the initial capital stock per unit of labor, k0, is below its long-run level).

Proposition 3 confines attention to the case the debt-GDP ratio becomes zero over time so that the economy converges to the steady state without public bonds. In this case, therefore, the Ponzi game can only affect welfare on a transitory growth path. The next proposition explains the welfare consequences of a Ponzi game with

The result is illustrated in Figure 3. Like in the case the Ponzi games benefits the current young and, possibly, a finite number of subsequent generations. If the economy without public debt is dynamically efficient, however, all generations born after some time will be made worse off. Since the economy converges to the economy without public debt, the welfare of future generations will converge to the level of welfare they would have obtained, if the government had not launched a Ponzi game at time 0.

The present note has shown that the government may issue bonds and roll over interest and principal, that is run a Ponzi game, even if the economy without public debt is dynamically efficient. This becomes possible when the government taxes capital income and the net of tax interest rate is smaller than the economy’s rate of growth, whereas the gross of tax interest rate is larger. Then, if the government exempts interest payment on public bonds from capital taxes, the total amount of public debt will grow at a lower rate than aggregate income and, as a consequence, a Ponzi game becomes feasible. Such a Ponzi game will benefit the current young generation and, depending on the parameters of taste and technology, a finite (maybe large) number of future generations. Thereafter, however, welfare is lower than in an economy without public debt. Thus, tax-exempt bonds may be employed by governments that want to please current generations and the generations that live in the not too distant future.

Expressing public debt in per GDP units (rather than expressing it in per labor units) facilitates the analysis as it allows to separate the bond dynamics from the dynamics of the capital stock per worker.

Galor and Ryder (1991) discuss a variety of conditions that guarantee dynamic efficiency in the overlapping generations model. 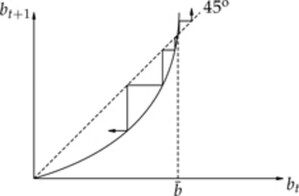 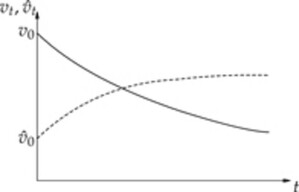 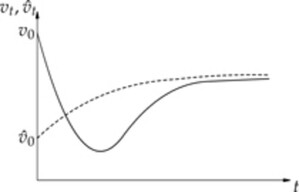