This paper reviews a broad set of indicators of competitiveness in the Macedonian economy and estimates the equilibrium real effective exchange rate (REER) using different methodologies. Although the REER is broadly in equilibrium at present, structural factors are found to hamper competitiveness. While a more competitive exchange rate might improve short-term export performance, sustained improvements require enhanced productivity and resource reallocation to more dynamic sectors, which depends on reforms to improve the business environment.

This paper reviews a broad set of indicators of competitiveness in the Macedonian economy and estimates the equilibrium real effective exchange rate (REER) using different methodologies. Although the REER is broadly in equilibrium at present, structural factors are found to hamper competitiveness. While a more competitive exchange rate might improve short-term export performance, sustained improvements require enhanced productivity and resource reallocation to more dynamic sectors, which depends on reforms to improve the business environment.

The political crisis of 2001 worsened export performance and growth. During 1995-2000, the average growth of exports (9.5 percent) raised the share of exports in GDP from 32 to 46 percent (Figure 2). However, the political crisis of 2001 resulted in a severe contraction in output and exports that lasted until 2004. Only in 2005 did the export share of GDP return to its pre-crisis level.

Exports of iron and steel and “other” exports are the main drivers of the recent improvement in export performance. Macedonian exports are highly concentrated. Exports of iron and steel, textiles, and food, beverages and tobacco account for about 60 percent of the total. During the 2001 crisis, exports fell in all sectors (except for textiles). The reopening of a large steel factory in 2004 and the removal of protectionist barriers in Serbia to imports of certain refined oil products in 2005 explain the recovery in the iron and steel sector and in “other” exports.

Nevertheless, unlike most other countries in the region, the FYR of Macedonia has lost market share in world imports since 1995, and especially in the US market (Figure 3). While there has been an improvement since 2004, export shares have yet to reach their 1995 levels.

The sectors in the bottom two quadrants are those whose share in total world exports of manufactures has declined. The sectors in the two right quadrants are those where FYR Macedonia’s export share has increased. Figure 4 indicates that the share of Macedonian exports has increased in most of the main manufacturing sectors in which the economy is specialized. However, these are sectors with a declining share in world manufacturing trade, and this explains why FYR Macedonia’s exports have also declined as a share of world exports.

A. Indicators of Wage and Cost Competitiveness

In contrast, real effective exchange rate (REER) indicators show that price competitiveness has improved in the last decade. Though the 1997 devaluation resulted in a sharp real depreciation, it did not noticeably affect the average current account deficit—in the absence of negative terms of trade shocks—or stop the decline in export shares (Figure 6).

B. Estimates of the Equilibrium Real Effective Exchange Rate

Estimates of the equilibrium real effective exchange rate (EREER) tend to be quite sensitive to the methodology used, and are particularly challenging in transition economies due to data limitations. This paper tries to answer the question of whether the REER is in line with macroeconomic fundamentals through using three different methodologies: the purchasing power parity approach (PPP), the macroeconomic balance approach, and the behavioral equilibrium exchange rate (BEER) approach.

We estimated the underlying current account using the methodology and equations estimated by Isard and others (2001) for the volumes of non-oil exports and imports:

Using the equations above we estimate that the Macedonian underlying current account ranges between 0 and -3.1 percent, depending on the treatment of private transfers as current account or capital account transactions (Table 1).4 The exchange rate is assumed to remain at prevailing levels. World Economic Outlook (WEO) projections were used for the six-year ahead values of real absorption for FYR Macedonia and its trading partners.

To estimate the structural current account we used the equation of Chinn and Hito (2005) for a panel of developing countries, excluding Africa. The average current account balance (over a five year period) is related to the government balance, the country’s net foreign asset position, relative per capita income, demographic variables affecting the savings rate (relative to the mean across all countries), the degree of financial development (measured as credit to the private sector), volatility of the terms of trade, average GDP growth, the degree of openness (measured as gross external trade as a share of GDP), a dummy indicating whether the country is an oil exporter or not, and time dummies (Table 2).

Substituting the values for FYR Macedonia into this equation, we estimate that the structural current account balance is about -2 percent of GDP.5 The values for FYR Macedonia were obtained from different sources. The government balance was calculated by staff adjusting for central bank recapitalization expenditures. The net foreign asset position was obtained from Lane and Milesi-Ferreti (2006). The rest of the variables were obtained from WEO, IFS, and the World Bank Population Statistics. The constant plus the time dummy for 2003 indicates that the structural current account balance for a developing country should be around 2 percent of GDP excluding the effect of macroeconomic determinants. For the case of FYR Macedonia, the relatively large share of young and old population, and the net foreign asset position are the main factors explaining the estimated 2 percent structural current account deficit.

This approach estimates the EREER by identifying structural determinants using an exchange rate model. The framework adopted in this paper is similar to that proposed by MacDonald and Clark (1999). The starting point is the real interest rate parity condition, where the change in the real exchange rate (q) is equal to the real interest rate (r) differential plus a risk premium (ρ). This parity condition can be expressed as:

As suggested by MacDonald and Ricci (2003), real interest rate differentials capture three different effects—aggregate demand changes, productivity changes, and persistently tight monetary policy—leading to domestic currency appreciation. First, higher interest rates relative to other countries are associated with an increase in absorption, higher nontradable prices, and a real appreciation. Second, an increased productivity of capital would result in capital inflows and an appreciation of the domestic currency. Third, a tight monetary policy, in the presence of price rigidities, would lead to a domestic currency appreciation. There is no hard rule on whether to include the interest rate differential as part of the long-run component or, instead, as part of the short-run exchange rate dynamics. Both effects could be present.

Figure 8 shows the REER index for the period 1995:Q1 - 2005:Q4 and its long-run determinants. Overall, the real exchange rate has depreciated over the period. During 1995-97 there was a significant real depreciation culminating with the 1997 devaluation. Subsequently, the REER appreciates, mostly due to the depreciation of the Serbian dinar. Moderate inflation compared with trade partners explains the depreciation trend since end-2000. Over the same period, Macedonian real GDP per capita has declined relative to the main trading partners, a trend that started to reverse in the past three years due to increased GDP growth. The NFA of the domestic banking system has continuously increased as a share of GDP, and the economy has become more open. The terms of trade have been quite volatile, as well as the real interest rate differential vis-à-vis the EU. Unfortunately, these variables are available only since 1998. Due to this limitation, and to abstract from the possible break introduced by the 1997 devaluation, the analysis was conducted for the full period, as well as for the period 1998-2005.

We used a vector error correction framework (VECM), employing the maximum likelihood estimator of Johansen to estimate a long-run (cointegration) relationship between the exchange rate and macroeconomic fundamentals. An important advantage over single-equation methods (such as the Engle-Granger method) is that this approach accounts for simultaneity and autocorrelation of the endogenous variables. The VECM also permits the inclusion of additional exogenous variables that may help explain the short-run behavior of the real exchange rate.

The vector Z includes the real effective exchange rate as well as its macroeconomic determinants, while the vector X includes the exogenous variables. Γ is a (nxn) matrix of coefficients whose rank determines the number of cointegrating vectors. If Γ is of reduced rank r (with r < n), then Γ can be expressed as Γ= αβ’ where β is the matrix with r linearly independent cointegrating vectors, and α is a matrix with the speed of adjustment coefficients to the long-run equilibrium. The coefficients ρ and γ capture the short-run elasticities of the endogenous and exogenous variables, respectively.

The implementation of the VECM framework requires the series to be cointegrated. Therefore, our limited sample size warrants some caution in the interpretation of the econometric results. Prior to the cointegration analysis, the Augmented Dickey-Fuller test was applied to each time series, in each case failing to reject the null hypothesis of a unit-root, independent of the period considered (although marginally so in the case of the real interest rate differential). To analyze cointegration, the Johansen maximum likelihood method is applied to the set of endogenous variables, Z. The trace test and the maximum-eigenvalue test always found evidence of at least one cointegration relationship.

Different VECM specifications were estimated. We found that the terms of trade (TOT) and the NFA were not significant determinants of the REER, and given the short data sample, we eliminated the variables to avoid losing degrees of freedom. Table 3 includes the estimation results of the preferred specification for the different samples.

While the estimation suggests that price competitiveness is broadly appropriate, survey-based indicators reveal structural impediments to external competitiveness. FYR Macedonia’s low rankings in the World Bank Business Environment database show difficulties in starting and closing a business, enforcing contracts, and hiring and firing workers relative to other countries in the region (Table 4). In addition, the evolution of the ranking indicates that the structural reforms undertaken have yet to improve competitiveness in a meaningful way. According to the World Economic Forum, FYR Macedonia is among the less competitive countries in the region (Table 5).

The analysis in this paper suggests that price competitiveness is broadly appropriate at present, but structural factors are major impediments to future improvements. The real exchange rate has depreciated steadily and, compared with countries with similar incomes, the Macedonian price level is low. Although estimating the equilibrium real exchange rate is challenging, particularly for transition economies because of data constraints, staff estimates indicate that currently the exchange rate is broadly in line with macroeconomic fundamentals. In contrast, direct wage comparisons across countries suggest a cost competitiveness problem, though data heterogeneity makes comparisons difficult. Macedonian manufacturers have succeeded in maintaining or increasing their share in exports. However, specialization in sectors with low value added and a declining share in total global trade has resulted in a decline in total export share, pointing to a structural competitiveness problem.

While a more competitive exchange rate might improve short-term export performance, sustained improvements require enhanced productivity and resource reallocation to more dynamic sectors, which depends on reforms to improve the business environment. Contrary to the experience in most transition economies, productivity in FYR Macedonia has declined in the past decade vis-à-vis trading partners, although this trend has started to reverse, improving competitiveness. To sustain and increase market shares, specialization in sectors with higher value added and increasing world demand will be necessary. Foreign direct investment and domestic private investment are key to achieving the necessary economic transformation, but boosting investment will depend on the successful implementation of structural reforms aimed at improving the business environment.

Econometric Estimates of the Equilibrium REER 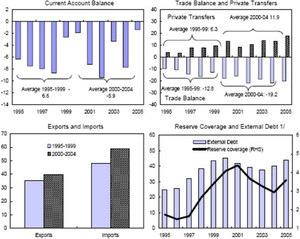 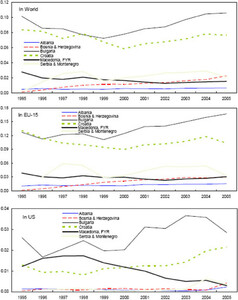 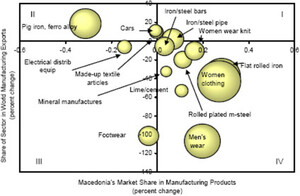 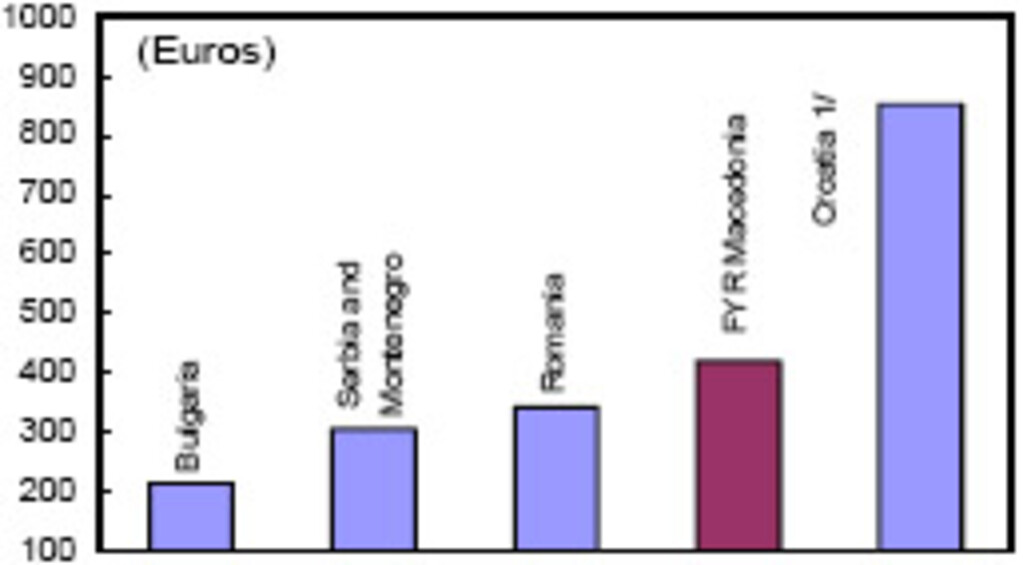 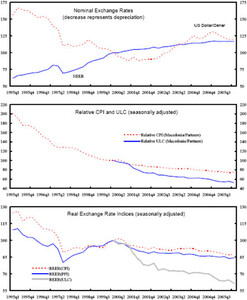 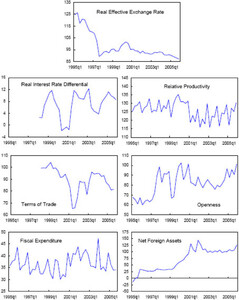 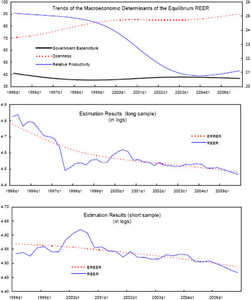 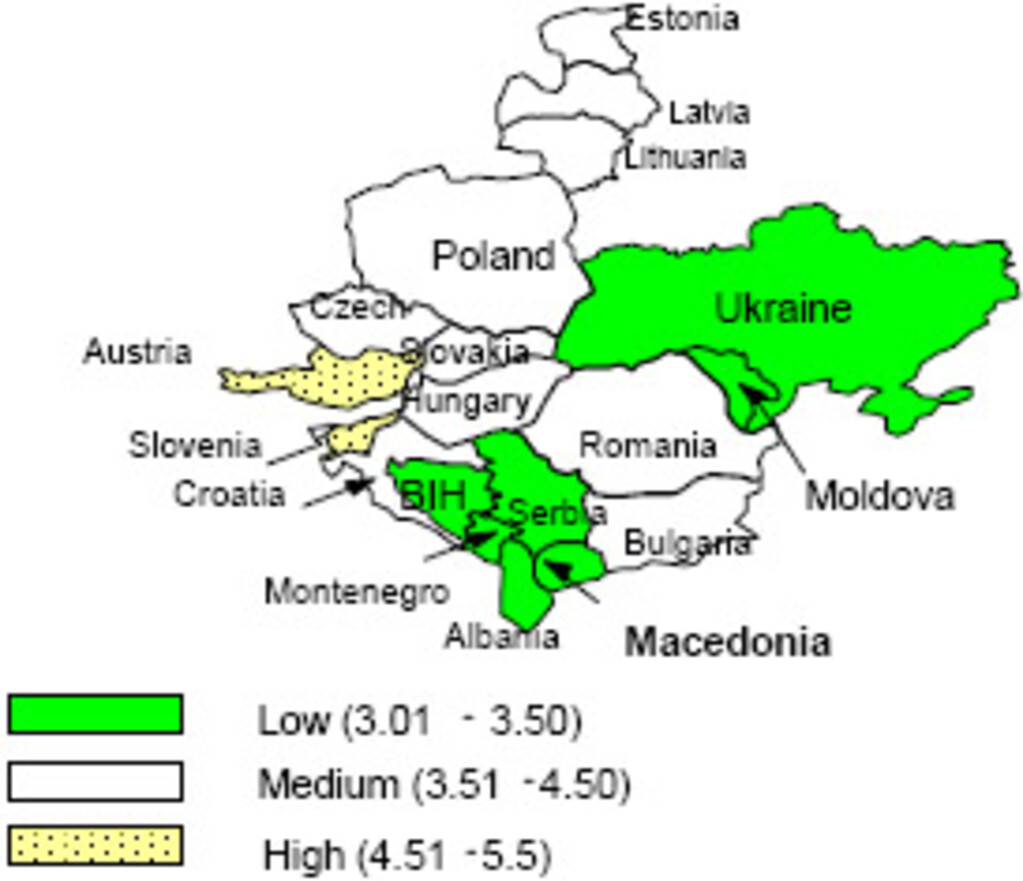