Increased attention is being paid to assessments of the actual values of countries' real exchange rates relative to their "equilibrium" values as suggested by "fundamental" determining factors. This paper assesses the robustness of alternative approaches and models commonly used to derive equilibrium real exchange rate estimates. Using China's currency to illustrate this analysis, the variance in estimates raises serious questions regarding how robust the results are. The basic conclusion from the tests used here is that, at least for China, small changes in model specifications, explanatory variable definitions, and time periods used in estimation can lead to very substantial differences in equilibrium real exchange rate estimates. Thus, such estimates should be treated with great caution.

Increased attention is being paid to assessments of the actual values of countries' real exchange rates relative to their "equilibrium" values as suggested by "fundamental" determining factors. This paper assesses the robustness of alternative approaches and models commonly used to derive equilibrium real exchange rate estimates. Using China's currency to illustrate this analysis, the variance in estimates raises serious questions regarding how robust the results are. The basic conclusion from the tests used here is that, at least for China, small changes in model specifications, explanatory variable definitions, and time periods used in estimation can lead to very substantial differences in equilibrium real exchange rate estimates. Thus, such estimates should be treated with great caution.

Increased attention is being paid to assessments of the actual values of countries’ real exchange rates relative to their “equilibrium” values as suggested by “fundamental” determining factors. However, because of the methodological and empirical difficulties involved in establishing the equilibrium real exchange rate for a currency and/or estimating the deviation of the actual real exchange rate from its equilibrium level, it is not surprising that researchers have come up with a wide range of estimates. This has been particularly so in the case of attempts to estimate the equilibrium exchange rate for China’s currency, the renminbi (Dunaway and Li, 2005). The variance in these estimates also raises serious questions regarding how robust equilibrium exchange rate estimates are. Various tests are presented in this paper to assess the robustness of alternative approaches and models commonly used to derive such estimates. The basic conclusion that can be drawn from these tests is that, at least for China, small changes in model specifications, explanatory variable definitions, and time periods for estimation can lead to very substantial differences in equilibrium real exchange rate estimates.

The robustness of equilibrium real effective exchange rate estimates from the macroeconomic balance approach was tested. In Goldstein (2004), the CA gap was estimated to be roughly 4 percent of GDP, and the real undervaluation of the renminbi was estimated to be 15–30 percent. Coudert and Couharde (2005) also find a CA gap of 4 percent of GDP, and their estimated undervaluation is 23 percent. In contrast, Wang (2004) finds a smaller CA gap of 1 percent of GDP, suggesting a small undervaluation.2 These studies come up with different estimates of undervaluation, in part because they also use different price elasticities for exports and imports.3 Figure 1 illustrates how much (in terms of percentage points) an estimate of undervaluation can change for every one-percentage point error in the CA gap and every 5 percent error in the estimate of trade price elasticities.4 It suggests that, over a 3 percentage point range of error in the estimate of the CA gap (which is roughly equivalent to the differences in the studies cited above) and allowing for potential errors in the estimates of trade elasticities (up to 50 percent), the undervaluation of the renminbi could change by up to 23 percentage points.

The extended PPP approach is based on the assumption that purchasing power parity holds in the long run, but factors may act to prevent the actual exchange rate from converging to its PPP-determined level in the short to medium term. Taking into account the predicted influence of these factors, an equilibrium exchange rate can be calculated. In estimating an equation, this approach is subject to the usual problems with single-country data analysis, such as short time series, independent variable selection and specifications, the choice of sample period, and the estimation technique employed.

A single-country extended PPP equation is usually specified as follows:

where REER is the measure for the real effective exchange rate for the home country; Relprod is productivity of the home country relative to the rest of the world; NFAratio is the ratio of home country net foreign assets to some appropriate scalar; and OTHER represent a collection of different variables that have been used in previous studies. Generally in studies for developing countries, REER is defined based on relative CPIs adjusted for exchange rates. This is done primarily because CPIs are the most readily available price indexes for these countries, and not because such measures are good proxies for competitiveness. Relprod is often proxied by the ratio of the consumer price to the producer price index for the home country relative to the CPI/PPI ratio for the country’s major trading partners (Wang, 2004; and Coudert and Couharde, 2005). The presumption is that this ratio proxies changes in the relative price of tradables to nontradables, as the PPI consists of mostly tradables while the CPI consists mostly of nontradables, and that there is a relatively close link between changes in this ratio and changes in relative productivity. However, there are several reasons to believe that there is not such a close link in the case of China, as well as in many other countries.5 Alternatively, Relprod can be measured directly by the ratio of GDP per worker in the home country relative to that of its major trading partners (Lee and others; 2005; and Cheung, Chinn, and Fujii, 2005). The NFAratio is meant to capture the influence of capital flows on the equilibrium real exchange rate. Empirically, it is often measured as the ratio of net foreign assets to GDP (NFA/GDP) (Wang, 2004) or to exports (NFA/X) (Lee, 2005). The OTHER variables typically used in previous studies include such things as the terms of trade and a measure of external openness (usually defined as the ratio of total trade to GDP).

To illustrate the sensitivity of estimates of equilibrium real exchange rates to changes in the specification of explanatory variables and which ones are included, a simple extended PPP equation for China was estimated with Relprod and NFAratio as the explanatory variables. This “baseline” equation was estimated over the period 1980–2002. In the equation, Relprod was specified as the ratio of real GDP per worker for China relative to real GDP per worker for its major trading partners, and the NFAratio was specified as net foreign assets relative to GDP. The difference between the actual and the “equilibrium” real effective exchange rate was calculated based on an out-of-sample forecast for 2005. Table 1 shows how this difference (an estimated undervaluation in the case of China) changes as the specification of variables and which variables are included in the equation changes. When the relative productivity variable is measured by the ratio of CPI/PPI instead of by relative GDP per worker, the estimated undervaluation of the real exchange rate declines by almost 24 percentage points. This reflects a sharp rise in the relative GDP per worker variable during the out-of-sample period 2003–05, while the relative CPI/PPI variable was more stable. Replacing the NFA-to-GDP ratio by the ratio of NFA to exports reduces estimated undervaluation by about 6 percentage points. Making these two changes in explanatory variable specification together, reduces the estimate of undervaluation by close to 38 percentage points. Adding additional explanatory variables also tends to reduce the estimated undervaluation. Inclusion of a terms-of-trade variable (TOT) reduces it by 4 percentage points, while adding an openness variable reduces it by about 31 percentage points because the share of total trade in GDP soared from 43 percent in 2002 to 64 percent in 2005.

Often the extended PPP model is estimated using data for a panel of countries. This is done at times to overcome problems with short time series for dependent and explanatory variables, especially in the case of developing countries. It is also often done in order to derive equilibrium real exchange rate estimates that are consistent on a multilateral basis. For a panel regression to provide “reasonable” estimates for the equilibrium real exchange rate for any given country, there has to be a rather high degree of similarity across countries in terms of both the variables that explain the real exchange rate and their relative importance.

The sensitivity of estimates of China’s equilibrium real exchange rate derived from a panel regression is tested by randomly varying the countries included in the panel and the sample period for the estimation, as well as by changing the specifications of the explanatory variables. A panel of 11 economies in the Asia-Pacific region was used to estimate a standard extended PPP model.6 The general form of the estimated equation is:

For a “baseline” equation, Relprod was specified as the ratio of real GDP per worker for each economy in the panel relative to real GDP per worker for its major trading partners, and the NFAratio was specified as net foreign assets relative to exports.7 The sample period for the equation was 1980–2002. For the baseline equation, the difference between China’s actual and the predicted “equilibrium” real effective exchange rate was calculated based on an outof-sample forecast for 2005.

Other tests suggest that estimated coefficients for the explanatory variables exhibit significant cross-country variations. Using a panel data model with homogenous slopes to estimate an equilibrium real exchange rate relationship involves making an assumption that only the intercept term (α0i in equation 2) differs across countries, while the rest of the equation’s coefficients are the same for all of the economies in the panel. A seemingly unrelated regressions model was used to test the validity of this assumption. Estimated results for this type of model show that the coefficients for the relative productivity, NFA-to-export ratio, and terms of trade variables differ significantly across selected economies in the panel, and accordingly, the estimated deviation of China’s real exchange rate relative to the baseline estimate differs by up to 50 percentage points (Tests 5, 6, and 7 in Figure 2).9

As demonstrated by Haque, Pesaran, and Sharma (1999), ignoring differences in coefficients across countries can lead to misleading inferences about the key determinants of any particular economic relationship.10 In this instance, assuming common coefficients in order to use panel data analysis could lead to serious errors in the estimates of equilibrium real effective exchange rates.

The authors would like to thank Jahangir Aziz for his useful suggestions and Mehmet Ziya Gorpe for his excellent research assistance.

Wang (2004) also finds a 1 percent of GDP negative CA gap, suggesting an overvaluation of the renminbi.

A direct comparison of the trade elasticities in each of the three studies is not possible because the trade models used are not explicitly described.

For the price elasticities, ten 5-percent steps are shown, representing export or import price elasticities that deviate by 0-50 percent, so if the estimated elasticity was 1, then the variations experimented will range from 1-1.5.

In China’s case, elements of the CPI, such as utility prices, are still under government control, housing costs are imputed based on prices in rental markets that are not fully developed, there is mismeasurement of price increases because adequate adjustments for improvements in quality, especially for durable goods, are not made. Liberalization of price controls in China have affected the CPI and the PPI by different amounts and at different times, with the resulting changes in the ratio of the two price series potentially being misinterpreted as changes in productivity.

This specification of the equation and the explanatory variables broadly follows that used in Lee and others (2005).

Panel regressions were estimated for randomly selected five-year periods using data for 1994-2002. 1994 is selected as the beginning year because of a major regime shift in China’s exchange rate. In that year, China’s official exchange rate was devalued and unified with the exchange rate at China’s foreign exchange swap centers.

Appendix I describes the methodological difficulties of dealing with slope heterogeneity in dynamic panel data models. 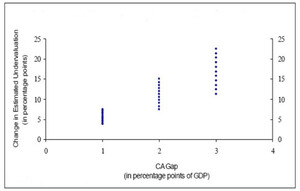 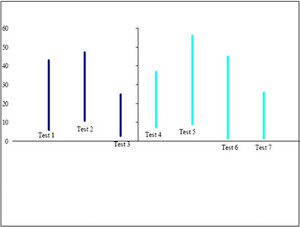 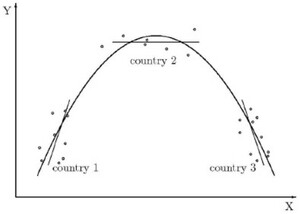