Since recent debt restructurings that constitute credit events have been more frequent than outright defaults, sovereign bond prices may not collapse during distress. In this case, the likely high recovery values after restructuring suggest that the cost of credit-default-swap (CDS) contracts to the buyer (as measured by CDS spreads) may be higher than warranted. We estimate the extent of such overpricing by using the cheapest-to-deliver (CTD) bond as a proxy for the recovery-value assumption.

Since recent debt restructurings that constitute credit events have been more frequent than outright defaults, sovereign bond prices may not collapse during distress. In this case, the likely high recovery values after restructuring suggest that the cost of credit-default-swap (CDS) contracts to the buyer (as measured by CDS spreads) may be higher than warranted. We estimate the extent of such overpricing by using the cheapest-to-deliver (CTD) bond as a proxy for the recovery-value assumption.

Recovery values on sovereign emerging market debt have not been subject to extensive research, largely owing to the changing nature of sovereign debt crises. Singh (2003) gives an overview of the approximate recovery rates from recent sovereign debt restructurings in emerging markets. Sturzenegger (2002) reviews the bond restructurings in Russia, Pakistan, Ecuador, and Ukraine. Since bond prices depend on the expected recovery value, it is possible to derive recovery values implied by market prices, especially during a crisis. Merrick (2001) shows the effect of Russia’s restructuring terms on domestic bonds in 1998 on the implied recovery rates on Eurobonds in Russia and Argentina.

Singh (2004) uses spreads on credit-default-swap contracts (CDS) to estimate the implied default probabilities using the cheapest-to-deliver (CTD) bond to proxy for a stochastic recovery value. A CDS works as an insurance policy against the risk of an underlying borrower defaulting. Typically, an investor who owns a regular bond buys a CDS and makes fixed regular payments to the protection seller (i.e, the insurer). In exchange, the insurer guarantees payment of the whole amount (par value of the bond) upon default or a credit event (as specified in the contract). A CDS contract usually refers to a basket of deliverable bonds at the time of the contract, giving the protection seller a valuable option to deliver the cheapest bond upon default or a credit event. These CTD bonds―or deliverable bonds―are generally priced at a discount to other similar bonds owing to their illiquidity, currency denomination, legal jurisdiction, and other special features. In this paper, we use the CTD bond methodology to estimate the theoretical CDS spreads and compare them with market CDS spreads during distress in emerging markets.

II. CDS Spreads as a Measure of the Marginal Cost of Borrowing

We view CDS spreads as the marginal cost of debt, while the EMBI+ sub-index for a country is more representative to the average cost of traded debt. During distress, it is the marginal cost that is often more relevant; and although CDS spreads are a derivative of the cash bond market, their volatility and absolute levels may lead to sell-off in the underlying bonds.2 This distinction is important since the EMBI+ sub-index has a much higher duration owing to the weighted average of all cash bonds (many of them including Brady bonds and 30-year bonds). The CDS spreads for a sovereign are usually quoted for no longer than a 5-year maturity; hence, their duration is much lower than for cash bonds. As Figure 1 suggests, CDS spreads could be a leading indicator, especially during a crisis when the marginal borrowing cost is more applicable to avoid restructuring or default, while the average cost is a better proxy for the sovereign risk in the absence of distress.3

III. Restructuring as a Credit Event

Recent evidence suggests that the frequency of restructurings far outnumber actual defaults both in the high-yield market and in emerging markets. For the vast majority of CDS contracts, the restructuring term that is incorporated comes from the International Securities Dealers Association (ISDA) 2003 Credit Derivative definitions. A CDS contract can be exercised only if it is associated with a credit event. Events that fall under this definition include (a) change in interest rate, (b) change in principal amount, (c) postponement of interest or principal payment date, (d) change in ranking of priority, and (e) change in currency of payment of interest or principal in a non-permitted currency.4 Rating agencies, however, may have slightly different perspectives. For example, Moody’s views a restructuring, or distressed exchange that results in an economic loss to bond holders, or changes in interest and principal amounts, as a credit event (for their study on defaults).

In the context of emerging market, and following a credit event, the protection buyer can exercise the option to deliver an acceptable bond in a permitted currency to the protection seller. A voluntary debt exchange may preclude such rights, however, unless key economic terms (interest rate, principal amount, etc.) are altered during a debt exchange. Following a credit event, a protection buyer of a CDS contract can deliver any pari-passu bond in a deliverable currency. Typically deliverable currencies include the U.S. dollar, euro, yen, and in some cases the British pound, Swiss franc, and the Canadian and Australian dollars. Recent episodes of financial distress in Argentina, Uruguay and Brazil suggest that yen-denominated bonds are usually the cheapest-to-deliver (CTD) bonds, owing to their low coupons, comparably low liquidity, and regulatory arbitrage. Following a credit event, CDS protection buyers actively seek the yen bonds as deliverable obligations to CDS protection sellers to maximize their option value (see Box 1).

Differential guidelines by Japanese regulators may provide room for accounting arbitrage. Japanese accounting rules have required banks and non-life-insurance companies to mark to market their portfolios since April 2002. However, the prefecture/locally run pension funds (such as those of Hokkaido and Saitama), and life-insurance companies (such as Nippon and Dai-ichi, or the Policeman Retirement Fund, and the Fisheries Association Fund) are not yet subject to the mark-to-market requirement. Market sources indicate that had it not been for such accounting arbitrage, it would have remained inexplicable why the local municipality pension fund of Hokkaido held a sizable amount of defaulted Argentine yen paper.

Recovery values in the aftermath of a restructuring announcement or during a debt exchange do not always go as low as 20 percent (or 25 percent) of face value, as is often assumed. We understand that CDS traders will quote prices (in spreads) that clear the market, with little regard to the fundamentals. In fact, the assumed recovery value is a constant. Subjective notions on the probability of default are factored by CDS sellers in their models and provide a benchmark for price quotations to CDS buyers.

Theoretically, CDS spreads are a joint function of r (recovery value) and p (probability of default), where both r and p are stochastic. Recent episodes of distress (that may have led to debt exchanges) have not resulted in bond prices collapsing to 20 or 25 cents on the dollar. In the case of Uruguay, the price of its lowest bond was in the 40 cent range—Table 1 for prices during the debt- exchange period. Uruguay’s yen bond price (the 2.2 percent, 2006 issue) increased from 41 cents to 47 cents of face value on the dollar during the exchange but remained the cheapest-to-deliver bond of all deliverable bonds.6 In the Dominican Republic’s case, the cheapest-to-deliver bond has been near the 70 cent range (the 2013 bond). Brazilian bonds, during the 2002 crisis, did not go below 35 cents to the dollar.

First, we use the CDS formulas to determine the implied probability of the traders when they price CDS contracts—Annex I. Although protection seller will seek the highest price to underwrite a contract, the seller’s subjective probability is nevertheless relevant in quoting CDS spreads to a buyer. We thus use actual market prices of CDS contracts, measured in spreads, and the assumed recovery value of 20, in line with market practice, to calculate this probability of default. Since we argue that during distress the CDS market is very volatile and may disentangle from the cash bond market, this subjective measure of default risk is the only benchmark used by the underwriter to price CDS contracts.

Second, we derive theoretical CDS spreads by using the probability of default derived in step one and a stochastic recovery value approximated by the cheapest-to-deliver bond (CTD).7 Duffie (1999) suggests that the offsetting features between a constant r and p in CDS contracts “work poorly at high spread levels” (i.e., during distress). The CTD measure for recovery value, r, is jointly stochastic with p and works well during distress (Singh 2004). We show the extent of possible overpricing between market CDS spreads and theoretical CDS spreads in Figures 2, 3, and 4. The two CDS spreads use identical probabilities of default but different recovery values. Although this does not follow common no-arbitrage arguments, the results give an idea about the sensitivity of CDS spreads with regard to the recovery value. Where a credit event is not associated with a significant decrease in cash bond prices—as it was the case in the Uruguayan exchange—such overpricing might be quite pronounced.

Intuitively, from a protection buyer’s view, if prices do not collapse to 20 following a credit event, then the expected loss given default is reduced from par minus 20, to par minus x, where x > 20, as has been the case in recent distressed exchanges. Thus, the protection buyer should pay less for the CDS contract. Similarly, the seller of CDS contracts will pay out less to protection buyers since the CTD bonds that are received from CDS buyers are more valuable than 20 cents on the dollar.

Although CDS contracts allow for restructuring as credit events, the trend towards painless restructurings should be reflected in CDS pricing. The above findings suggest that recent credit events on emerging market sovereign bonds have often been the result of a restructuring rather than an outright default. Although significant economic terms may be altered as part of the restructuring (e.g., deferring the maturity by four years with no change in interest or principal payments), bond prices do not collapse, since there is no interruption of payments, and there is no impasse between the debtor and the creditor. Recent episodes of distress that have led to debt exchanges have not resulted in bond prices collapsing to 20 or 25 cents on the dollar (e.g., Uruguay, the Dominican Republic). Emerging market CDS contracts would do well to account for such restructurings, which become more common as both the debtor and the creditor work toward a negotiated settlement rather than outright default. 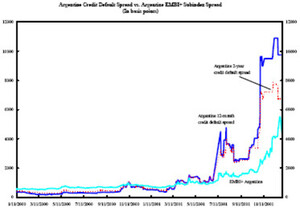 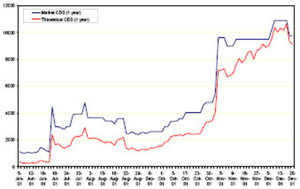 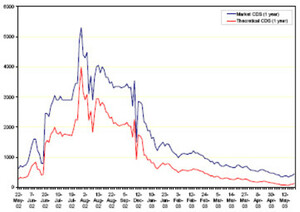 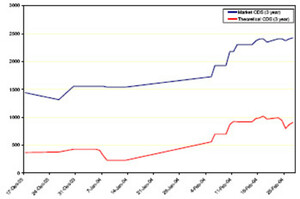