The contribution of the information and communication technology (ICT) sector to growth in Asian economies is clearly evident from the expenditure side (net exports) and became particularly significant in the second half of the 1990s. This paper employs an extension of the standard growth accounting framework, using estimates of stock of ICT capital (hardware, software, and telecommunications equipment), to estimate the direct contributions to growth. The contribution of ICT to growth in Asia during the 1990s is found to be mainly from capital deepening. Total factor productivity (TFP) is also decomposed (using the dual-or revenue-based-approach) into the contributions of non-ICT capital stock, ICT capital stock, and labor. TFP growth is found to be relatively small in most Asian countries.

The contribution of the information and communication technology (ICT) sector to growth in Asian economies is clearly evident from the expenditure side (net exports) and became particularly significant in the second half of the 1990s. This paper employs an extension of the standard growth accounting framework, using estimates of stock of ICT capital (hardware, software, and telecommunications equipment), to estimate the direct contributions to growth. The contribution of ICT to growth in Asia during the 1990s is found to be mainly from capital deepening. Total factor productivity (TFP) is also decomposed (using the dual-or revenue-based-approach) into the contributions of non-ICT capital stock, ICT capital stock, and labor. TFP growth is found to be relatively small in most Asian countries.

With the arrival of what is broadly held to be the next technological revolution—information technology—the natural question for economists has been what will be the impact on growth? This question has motivated a recent and growing body of literature. The focus of the initial studies such as Oliner and Sichel (2000) was the United States, where the impact of information and communication technology (ICT) on growth seemed most manifest and for which the required data were available. Subsequently, Goldman Sachs (2000), Daveri (2000), Bassanini et al. (2000), and Cardarelli (2001) have extended the investigation of the impact of ICT on growth to Europe, Japan, and Australia. This study extends the work to developing and emerging Asia, which has been possible with the availability of the IDC/WITSA data (discussed below).

There is also some debate in the literature as to the extent of the impact of ICT on growth. Oliner and Sichel (2000) and to a lesser extent, Jorgenson and Stiroh (2000) lean toward the view that ICT has played a significant role in generating a fundamental change in the U.S. economy’s growth. Despite some methodological differences, these papers derive similar estimates, attributing around a quarter percentage point of the acceleration in labor productivity since 1995 to ICT (TFP growth in the ICT sector) and a half a percentage point to capital deepening (all of which is attributable to the accumulation of ICT capital). In total, they estimate ICT has contributed three-fourth of the recent labor productivity acceleration.

In contrast, Gordon (2000) and Bosworth and Triplett (2000) adopt the more agnostic view that the ICT “revolution” has not had the same impact as the general-purpose technologies introduced in the past century (such as electricity or transportation). Gordon (2000) focuses on the cyclical component of the US labor productivity surge, suggesting that half of the acceleration after 1995 has been a cyclical phenomenon.

This study finds that the contribution of ICT to growth in Asia during the 1990s is mainly from capital deepening.

Total spending on ICT capital and services in key Asian economies other than Japan was equivalent to about 14 percent of that in the United States and 30 percent of that in Japan during 1992-99.2 Of the 9 Asian economies considered, China and Korea together accounted for more than half of the total ICT spending. For most economies, ICT spending increased in the second half of 1990s, especially on software where it doubled relative to the amount spent during the first half.

The large spending in the ICT sector helped some of these economies to recover from the Asian crisis. An important demand factor was the strong U.S. growth and its related demand for electronics during most of the 1990s. Of the 9 Asian economies, Hong Kong SAR was the only net importer of ICT products. The net benefit of electronics exports in some of these economies was, however, modest due to the small value added, and the worsening terms of trade with the decline in the electronic product prices, effectively transferring the gain to the importing countries.

Source: Calculations based on WITSA/IDC data.

ICT contribution to growth, via labor productivity, is measured from capital deepening, ICT production, and spillover to other sectors. First, capital deepening increases labor productivity through a larger capital-labor ratio. Second, ICT production adds to the economy-wide productivity through efficiency gains in the production of ICT goods. Finally, spillover effects have been observed from efficiency gains arising from greater use of ICT technology in the economy, especially in the services sector—e.g., business to business (B2B), even though there is no direct means of measuring these gains.

In an extension of the basic growth accounting framework, the Cobb-Douglas production function is specified as the parametric form of equation (A11) in Annex I as follows.

where the uppercase k, h, s, t, and q are, respectively, non-ICT capital stock, capital stock of hardware, software, and telecommunication, and labor; and y=Y/L; k=K/L; h=H/L; s=S/L; t=T/L; g is the Solow residual, and q is a quality-adjusted labor index (a detailed description of the data is provided in Annex II). αi is the income share of input I (calculated, based on available data for each economy).

where γ’s are shares of ICT (hardware, software, and telecommunication), non-ICT capital, and labor of total output.

Here, the sum of contributions from ICT capital deepening is measured by:

while efficiency gains from production are measured by:

Spillover effects from ICT to overall growth would be subsumed in other terms.

ICT contribution to productivity is estimated using data published by the World Information Technology and Service Alliance based on International Data Corporation (WITSA/IDC). These data are on ICT spending, rather than on investment, but these have been used because their wide coverage of countries, which provides consistency and facilitates comparison across countries. The data on ICT spending, which are in U.S. dollars, were first adjusted for quality improvements using the U.S. hedonic prices produced by the U.S. Bureau of Economic Analysis (BEA), and then converted into national currencies using PPP-based exchange rates to filter out short-term variations of national currencies against the U.S. dollar. (A more detailed description of the data is provided in Annex II).

Applying the above growth accounting framework, we found that ICT capital deepening has played an important role in improving labor productivity in Asia, especially during the second half of the 1990s. During this period, TFP growth however was less significant as the slowdown in capital stock and labor shedding was much more gradual than the drop in real GDP growth.

Labor productivity growth in the selected Asian economies dropped from 5 percent in the first half of 1990s to about 2½ percent in the second half of 1990s. While contributions from labor quality and, to a lesser extent, non-ICT capital stock also declined, the contribution from ICT capital stock to labor productivity rose from less than 10 percent to almost 30 percent during the same period. These developments contrast somewhat with those observed in the United States where the contributions from all factors of production rose in the second half of 1990s in tandem with a pickup in GDP.4 Within the overall composition of labor productivity growth in Asia, ICT capital deepening played a predominant role. The contribution from TFP declined from 20 percent to about 3 percent, which contrasts again not only with the United States but also with some of the non-Asian OCED countries.5

During the first half of 1990s, contributions to labor productivity from capital deepening in the ICT sector were noteworthy in several economies, including Hong Kong SAR, Singapore, and Korea. The contributions were strengthened further in the second half of 1990s, reflecting not so much an acceleration of ICT investment, but rather the maintenance of a relatively high level of ICT investment during a period of output collapse following the Asian crisis. During both of these periods, Hong Kong SAR, Korea, and Singapore benefited most from capital deepening in part due to the large income share of the ICT capital. In the case of the Philippines, even though capital deepened further in the ICT sector in the second half of 1990s, its contribution to GDP growth remained unchanged as its GDP growth rate was least affected by the Asian crisis in the second half of 1990s.

IV. Conclusions and Next Steps

Our main conclusion is that the impact of ICT on labor productivity in Asia is currently mainly through capital deepening. As noted in IMF (2001, p. 105): “The effects of such revolutions have generally occurred in three (often overlapping) main stages. First, technological change raises productivity growth in the innovating sector; second, falling prices encourage capital deepening; and, finally, there can be significant reorganization of production around the capital goods that embody the new technology.” Thus we may expect the bulk of the benefits from ICT in Asia (and the world) to accrue in the future.

The agenda for future work investigating the implications of the ICT sector for growth in Asia would include an assessment of the indirect effects of the ICT sector on productivity and growth (through the use of ICT in other sectors), a refinement of the data used— including the development of country-specific hedonic price indices, and alternative methodologies that do not require the imposition of restrictive assumptions such as constant returns to scale.

Data comprise spending on hardware, software, IT services (e.g., IT consulting, operations management, IT training and education, processing, and IT support), internal ICT spending (IT operating budget, internally customized software, and other expenses related to IT that cannot be directly tied to a vendor), and other office equipment and telecommunication. Data source: World Information Technology and Services Alliance (WITSA)/International Data Corporation (IDC).

Capital stocks were estimated using the data on ICT spending as a proxy for ICT investment and perpetual inventory method. Total investment excludes construction (or residential buildings in the case of the United States) except for Indonesia, Malaysia, and China, for which data were not available. Likewise, GDP data were also adjusted for construction (and agriculture whenever data was available) except for the three countries.

Given the weaknesses of the WITSA/IDC data, ICT contributions to growth for the United States were reestimated and compared with those in recent studies that were based on BEA and Bureau of Labor Statistics (BLS) data. The result shows a lower income share of software and a substantially weaker contribution from ICT production. The former is due to the slow growth in software investment recorded in the WITSA/IDC data relative to those in the BLS data. The latter is in large part due to the slow growth of real rate of return of ICT capital (even though it may be high in absolute terms), and the lower income share of software.

A dot over a variable signifies the derivative with respect to t.

Equation 4 holds only if the production function exhibits constant returns to scale. 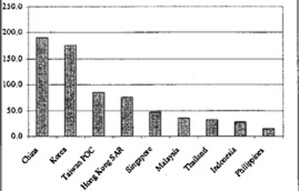 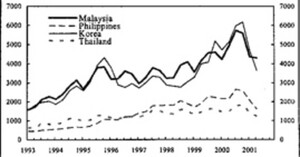 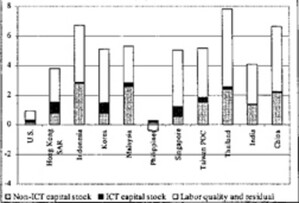 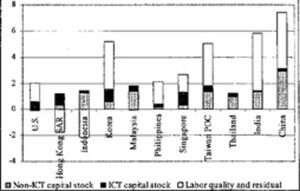 Powered by PubFactory
Close
Table A1.

Estimating Contribution to Growth in the United States and Selected Asian Economies, 1990–99