by Victoria P. Summers and Emil M. Simley “An Analysis of Value-Added Taxes in Russia and Other Countries of the Former Soviet Union”

by Marie Montanjees “Government Finance Statistics in the Countries of the Former Soviet Union: Compilation and Methodological Issues”

by Felix FitzRoy and Michael Funke “Skills, Wages, and Employment in Eastern and Western Germany”

by Dennis J. Snower “The Simple Economics of Benefit Transfers”

by Piritta Sorsa “Environmental Protectionism, North-South Trade, and the Uruguay Round”

by Dennis J. Snower “Evaluating Unemployment Policies: What do the Underlying Theories Tell Us?”

by Ratna Sahay and Carlos Vegh “Inflation and Stabilization in Transition Economies: A Comparison with Market Economies”

by Sayuri Shirai “The Pattern of International Trade Between Japan and the Pacific Basin Countries: A Comparison Between 1975 and 1985”

by Hamid Faruqee “Pricing to Market and the Real Exchange Rate”

by Vincent Koen and Michael Marrese “Stabilization and Structural Change in Russia, 1992-94”

by Ronald MacDonald “Long-Run Exchange Rate Modeling: A Survey of the Recent Evidence”

“Setting up a Treasury in Economies in Transition”

by Alan A. Tait and S. Nuri Erbas

by Michael T. Hadjimichael and Daneshwar Ghura “Public Policies and Private Savings and Investment in Sub-Saharan Africa: An Empirical Investigation”

by Pierre-Richard Agénor and Joshua Aizenman

“The Role of Foreign Currency Debt in Public Debt Management”

by Vito Tanzi and Anthony Pellechio

“The Reform of Tax Administration”

“Regional Integration in Eastern and Southern Africa: The Cross-Border Initiative and its Fiscal Implications”

“Current Account Surpluses and the Interest Rate Island in Switzerland”

by Christoph B. Rosenberg

“The Design and Printing of Bank Notes: Considerations When Introducing a New Currency”

by Paul Cashin and Norman Loayza

“Paradise Lost? Growth, Convergence and Migration in the South Pacific”

“Poverty Alleviation in a Financial Programming Framework: An Integrated Approach”

by Robert Ford and Douglas Laxton

by Craig Hiemstra and Charles Kramer

“Nonlinearity and Endogeneity in Macro-Asset Pricing”

by Russell Krueger and Jiming Ha

“Measurement of Co-Circulation of Currencies”

“Fiscal Restructuring in the Group of Seven Major Industrial Countries in the 1990s: Macroeconomic Effects”

“Wage Structure in the Transition of the Czech Economy”

by Michael Keane and Eswar Frasad

“The Employment and Wage Effects of Oil Price Changes: A Sectoral Analysis”

by Luis Catāo and Ramana Ramaswamy

“Recession and Recovery in the United Kingdom in the 1990s: A Vector Autoregression Approach”

by Robert Ford and Thomas Krueger

“Exchange Rate Movements and Inflation Performance: The Case of Italy”

“Exchange Rate Bands and Shifts in the Stabilization Policy Regime: Issues Suggested by the Experience of Colombia”

“Stabilization in the Baltic Countries: A Comparative Analysis”

by Anthony Richards and Gunnar Tersman

“Growth, Nontradables, and Price Convergence in the Baltics”

by Vito Tanzi and John King

“The Taxation of Financial Assets: A Survey of Issues and Country Experiences”

by Robert A. Feldman and Vincent Reinhart

“The Burden of Sub-Saharan African Own Commitments in the Uruguay Round Myth or Reality?”

by Vito Tanzi and Domenico Fanizza

“International Evidence on the Determinants of Private Saving”

by Giorgia Giovannetti and Hossein Samiei

“Asset Market and Balance of Payments Characteristics: An Eclectic Exchange Rate Model for the Dollar, Mark, and Yen”

by Burkhard Drees and Ceyla Pa2arbasioğlu 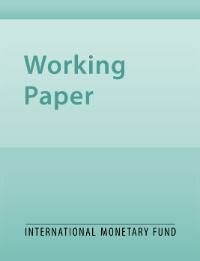