Latin America’s economic landscape is characterized by the presence of two large countries (Brazil in the south and Mexico in the north) with the potential to affect smaller neighboring economies significantly. This chapter documents trade linkages between these two large countries and their neighbors, and quantifies the economic impact of shocks stemming from these large economies. Results show important spillovers from Brazil to some of its neighbors, but not others. The analysis also finds that spillovers take place through the transmission of Brazil-specific shocks, as well as through Brazil’s amplification of global shocks. Central America’s trade linkages with Mexico are very weak, suggesting that real spillovers from the latter are small.

Latin America’s economic landscape is characterized by the presence of two large countries (Brazil in the south and Mexico in the north) with the potential to affect smaller neighboring economies significantly. This chapter documents trade linkages between these two large countries and their neighbors, and quantifies the economic impact of shocks stemming from these large economies. Results show important spillovers from Brazil to some of its neighbors, but not others. The analysis also finds that spillovers take place through the transmission of Brazil-specific shocks, as well as through Brazil’s amplification of global shocks. Central America’s trade linkages with Mexico are very weak, suggesting that real spillovers from the latter are small.

Business cycles in Latin American economies have historically been highly correlated with those of the two largest economies in the region—Brazil in the south and Mexico in the north (Table 4.1). These high correlations suggest that an output shock in either of these countries could have a significant impact on neighbors’ output.1 Such correlations, however, could also reflect common global shocks (such as to commodity prices,2 international financial conditions, global demand, or—in Mexico and Central America—U.S. economic conditions) as well as similar policy responses to those shocks.

Cyclical components of GDP obtained using the Hodrick-Prescott filter. Figures in bold denote the highest correlation for each row.

Cyclical components of GDP obtained using the Hodrick-Prescott filter. Figures in bold denote the highest correlation for each row.

A closer look at trade linkages between the two large countries and their neighbors suggests limited transmission channels for real spillovers in the majority of countries:3

Weak trade linkages between large neighbors and the Central American and Andean countries provide a priori evidence that real spillovers from these large economies are small. However, trade linkages are significant between Brazil and its Southern Cone neighbors, and spillovers may be important.5

We investigate this question in the rest of this chapter. The analysis requires controlling for common external factors that may be important for economic cycles across countries in the region. Thus, disentangling the spillover effects from large neighbors must be done within a multivariate setting.

A close look at exports to Brazil from the Southern Cone countries provides some insights into how spillovers may operate (Figure 4.3).

In line with this evidence, we estimate country-specific vector auto regressive (VAR) models to quantify Brazil’s spillovers to its Southern Cone neighbors, focusing on two types of channels: those resulting from Brazil-specific shocks, and those from the amplification of global shocks, through their impact on Brazil. This approach allows us to determine the relative importance of Brazil as a source of output fluctuations in neighboring countries.

Each country-specific VAR includes a set of global factors (demand, financial conditions, and commodity prices), Brazil’s GDP, and domestic GDP.6 The specifications for Bolivia, Chile, Paraguay, and Uruguay also include Argentina’s GDP, because this country may also be a source of spillovers for the smaller economies. The model is estimated using quarterly data for the period 1990Q1-2011Q4.7

The results provide some interesting insights:

To detect possible spillovers from Brazil’s amplification of global shocks, we follow a methodology proposed by Bayoumi and Swiston (2008). The methodology requires estimating a second set of VARs that include Brazil’s GDP as an exogenous variable.

In that specification, the estimated output response to a global shock would capture only that shock’s direct impact (not the indirect effect through Brazil). Brazil’s amplification effect can be gauged by the difference between the responses to the global shocks in the two models. This amplification effect encompasses (1) the sensitivity of Brazil’s output to global shocks and (2) the effect of that output response in Brazil on its neighboring country.

The results suggest that Brazil indeed amplifies global shocks, particularly financial ones, in most Southern Cone countries (Figure 4.5). While an adverse financial shock (measured by changes in the VIX) tends to have a negative impact on output in these countries,9 a non-negligible fraction of this effect may be attributed to its indirect effect—through its impact on Brazil’s GDP.10 More specifically, according to the estimations, a 10-unit increase in the VIX would lead to a cumulative output decline (at the peak) due to the Brazilian ‘knock-on’ effect, of 0.5—0.6 percent in Argentina, Paraguay, and Uruguay (Table 4.2). The impact is smaller in Bolivia and Chile.

Spillovers from Brazil as a source of output fluctuations in its neighboring countries are also evident from a simple variance decomposition analysis (Figure 4.6). Brazil’s spillovers account for a large fraction of GDP variance in Paraguay (16 percent) and Argentina (10 percent). In Uruguay, spillovers also are non-negligible (6 percent), but they play a much more limited role than spillovers from Argentina.

Southern Cone countries (Argentina, Bolivia, Chile, Paraguay, and Uruguay) have relatively high trade exposures to Brazil and are subject to spillovers from its large economy. Econometric estimates confirm that output in these countries (especially Mercosur’s members) is affected by both output shocks stemming from Brazil and by Brazil’s amplification of global shocks. The latter is particularly relevant at the current juncture, in light of the downside risks to the global outlook.

Neighbors in the Andean region (Colombia, Ecuador, Peru, and Venezuela) trade very little with Brazil. Mexico, the other large country in the region, has surprisingly small trade linkages with Central American economies. Weak trade (and financial) linkages suggest that business cycle synchronization with the large neighbors in Andean countries and in Central America mainly reflects the effect of common external shocks rather than spillovers from those large regional economies.

Are Depreciations of Brazil’s Currency Harmful to Its Trading Partners?

Policymakers—and private analysts—in the region, particularly in the Southern Cone, often express concern about the potential impact of a large depreciation of the Brazilian real on their economies, especially in countries with limited exchange rate flexibility. Such concerns hinge on the effect that a pronounced movement of the bilateral real exchange rate could have on exports to Brazil.

The sharp real depreciation of the Brazilian real in January 1999 provides a clear example that permits an assessment of the impact of such events on Brazil’s trading partners. The performance of exports to Brazil suggests that such events could actually have a positive impact on its neighbors (see Figure), seeing that exports to Brazil collapsed before the depreciation and recovered afterward. This response may reflect expansionary effects on domestic output and demand in Brazil that are stronger than the substitution effect arising from movements in the bilateral exchange rate. This pattern holds even for trading partners that were unable to adjust their exchange rates in response to Brazil’s depreciation, indicating they experienced sharp movements in bilateral real exchange rates.1 A VAR specification similar to the one presented in the main text, but including real exchange rates of both countries, points to the same result (for details, see Adler and Sosa, forthcoming).

Consistent with this interpretation, cross-correlation coefficients suggest that Brazil’s and Mexico’s cycles either co-move with or lead those of most neighboring countries.

Adler and Sosa (2011) document the degree of commodity dependence in Latin America.

The analysis focuses on exports of neighboring countries to Brazil and Mexico.

Trade integration with Brazil increased in the 1990s, in part because of the creation of Mercosur, a regional trade agreement with Argentina, Paraguay, and Uruguay. During the past decade, however, Southern Cone trade with Brazil—with the exception of Bolivia—has declined.

Global demand is proxied by (purchasing-power-parity-adjusted) real GDP of the Group of Seven countries and China; international financial conditions are proxied by the Chicago Board Options Exchange Market Volatility Index (VIX); and commodity prices are measured by a broad price index (in real terms and stripped of exchange rate effects, as in Adler and Sosa, 2011).

All the variables are expressed in log levels, and the model is estimated in first differences (except the VIX, which is expressed in levels), using two lags. Structural parameters are identified by Choleski decomposition. The ordering, from more exogenous to more endogenous variables, is as follows: first, the global variables; second, the regional variables (Brazil’s and Argentinas GDP); and finally domestic output. Results are robust to different orderings within the group of global variables. For more details, see Adler and Sosa, forthcoming.

Results for Bolivia should be interpreted with caution, because its exposure to Brazil changed markedly over the period of analysis (Figure 4.1), and trade linkages mostly reflect gas exports, which are governed by long-term contracts, with minimum volumes.

The effect in Bolivia is relatively small, probably reflecting its low degree of financial integration.

Output Response to a Negative Shock to Brazil’s Output1 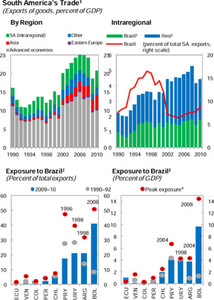 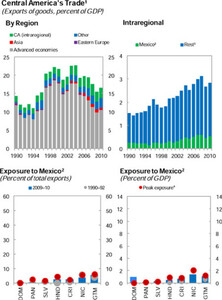 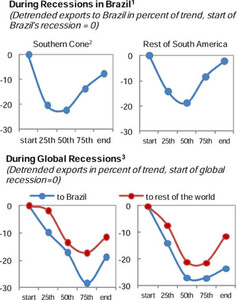 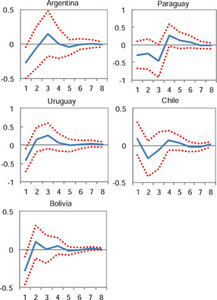 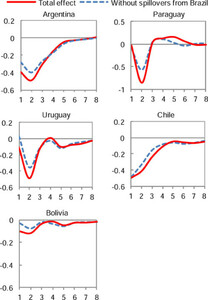 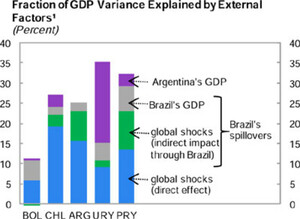 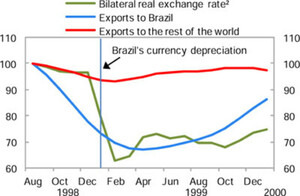