As the recovery in advanced economies is suffering new setbacks, the need for economic rebalancing in Asia has assumed even greater urgency. At the same time, China’s trade surplus is declining faster than previously anticipated, raising hopes that the much-needed shift of global demand to major surplus economies is finally taking place. Against that background, this chapter first explores recent trends in China’s trade balance and assesses the extent to which a sustained reduction in China’s external surplus is taking place. Based on an assessment of the factors determining recent changes in China’s trade surplus, the chapter will then present the implications for regional trading partners.

As the recovery in advanced economies is suffering new setbacks, the need for economic rebalancing in Asia has assumed even greater urgency. At the same time, China’s trade surplus is declining faster than previously anticipated, raising hopes that the much-needed shift of global demand to major surplus economies is finally taking place. Against that background, this chapter first explores recent trends in China’s trade balance and assesses the extent to which a sustained reduction in China’s external surplus is taking place. Based on an assessment of the factors determining recent changes in China’s trade surplus, the chapter will then present the implications for regional trading partners.

The main findings can be summarized as follows:

A. Is China Rebalancing?

These developments are related, in part, to cyclical forces, but the sustained downward trend may also reflect structural realignments (both external and domestic) that could have a bearing on China’s external balances beyond the eventual recovery in the cycle. To that end, this section identifies factors that may be contributing to the recent developments and assesses the prospects for the external balances.

Disaggregated data suggest that there are important realignments in China’s external trade patterns.

Accompanying these shifts in the composition of exports and imports are important changes in domestic spending patterns and cost pressures that may offer insights into the durability of the compression of China’s trade surplus.

Where Next for China?

Assuming that (i) global demand recovers as projected in the April 2012 World Economic Outlook (IMF, 2012c), (ii) China continues to gain global market share at the average pace of the past decade, (iii) its terms of trade deteriorate by about ½ percent per year, and (iv) its domestic investment remains close to current levels, then it is unlikely that China’s current account surplus will rise above 4–4½ percent of GDP over the medium term. Furthermore, if China continues to appreciate its currency in real effective terms from current levels (either due to faster nominal appreciation or due to a sustained increase in domestic cost pressures that translate into larger inflation differentials relative to trading partners), the surplus is likely to fall even below that range.

So far, however, this decline in China’s external surplus has been largely accomplished through higher investment, and the evidence does not yet indicate that household consumption is rising as a share of GDP. This investment has led to capacity building in a range of manufacturing areas in which China has previously not had a foothold. Nevertheless, the policy thrust of the 12th Five Year Plan is very much focused on raising household income, boosting consumption, and facilitating an expansion of the service sector. In the coming years, if these ongoing structural reforms to catalyze consumer spending are successful, the decline in China’s external imbalances would ultimately prove more sustainable.

B. What Are the Implications for Asia?

This section looks at the implications of the changes in China’s current account for other Asian economies, for which China can be a market for final goods, a supply chain hub, and a potential competitor.

Which economies in Asia will benefit from more domestic demand-led growth in China? As highlighted in section A, it is important to distinguish between investment- and consumptionled growth. Indeed, while China has become a growing source of demand for other economies in Asia, its demand for investment goods has risen more sharply than its demand for consumer goods, generally by a ratio of two to one (Figure 4.10).1 The traditional capital goods exporters in Asia—Japan and Korea—have been particularly exposed to China’s investment demand.

However, while high investment ratios in China may not be sustainable from a domestic perspective, these ratios might also fall if China’s export growth were set to slow permanently. There is a close relationship between China’s investment and its exports. First, both exports and manufacturing fixed-asset investment have been shifting from low-to high-tech products. Second, China’s major sources of foreign direct investment are aligned with its major import sources in the manufacturing process (Figure 4.11), which is a result of growing vertical trade integration that has fueled China’s rise as a leading exporter (see below). Were China to rebalance through consumption-led growth, ASEAN economies appear well positioned to benefit, given their relative strength in consumer goods exports. However, the benefits for regional trading partners might be small. First, despite rapid growth, China’s role as an importer of consumer goods is still marginal, as it accounts for only 2 percent of global consumer goods imports. Second, its share in global consumer goods imports has increased less since 1995 than its share in global consumption (Figure 4.12). In other words, Chinese consumers have turned increasingly toward domestically produced goods. This may reflect the inability of foreign producers to overcome implicit barriers, such as setting up large retail and distribution networks, increased competitiveness from domestic producers, and differences in consumer preferences as well as the need to be closer to the customer. Whatever the reasons for the relative decline in imports, a shift in global demand shares toward China would not automatically imply a commensurate shift in global import demand, resulting in a demand gap for exporters.

China as a Supply-Chain Hub

How would potentially slowing export growth in China affect the rest of Asia? The rise of China as a leading exporter has been closely linked to the rapid growth of supply chain networks in Asia that are centered on China. Based on direct and indirect trade flows for intermediate goods, and on data from Asian input-output tables, China’s share in all intra-Asian imports of intermediate goods increased substantially between 1995 and 2010 (Figure 4.13). China now accounts for about 50 percent of all intraregional intermediate imports, making it the center of Asia’s supply chain.

The effect of vertical trade integration appears to dominate export-demand relationships between China and its Asian trading partners.

China as a Competitor

Because of vertical trade integration, shifts in export (and import) market shares do not fully capture China’s changing role as a competitor to other Asian economies. In fact, the increase of China’s share in leading markets (using gross exports based on direction of trade statistics) overstates its share on a value-added basis with direct and indirect inputs from other Asian economies netted out. In the case of the United States, for example, China’s direct share of gross imports of final goods from Asia has increased to 62 percent in 2010, whereas, on a value-added basis, China’s share is less than 50 percent (Figure 4.15). In other words, greater vertical specialization has so far mitigated the impact of horizontal competition.

For more-advanced economies in Asia, the increase in competition as China’s exports shift increasingly toward high-tech goods will thus also depend on China’s ability to capture a larger share of the value chain. While the imported content in Chinese exports gradually increased through the mid-2000s, it has started falling in recent years.3 These trends could be reinforced by China’s rapid buildup in physical and human capital, allowing it to capture large parts of the technology-intensive value chain. In addition, rising fuel and transportation costs could also lead to a partial reversal of vertical trade integration by reducing the number of locations in a production chain. On the other hand, China’s industrial upgrading could create room for low-income countries in the region to expand.

What does the recent sharp decline in China’s external trade surplus reflect? In the main, it is a product of a secular worsening of China’s terms of trade as well as robust import growth fuelled by investment demand. Moreover, prospects for China to sustain the high export growth of the past decade remain uncertain. Taken together, while China’s external imbalances retreat, there is a concern that new domestic imbalances may be emerging. As a result, Asian trading partners that have benefitted from investment-led growth in China may face growing headwinds to their exports. Given the importance of vertical supply chain links with China, they would also be hurt if China’s exports were to slow. By contrast, increasing direct and indirect access to the Chinese consumer goods markets could offer lasting benefits for Asian trading partners.

This is estimated based on value-added-based trade flows, which net out intermediate goods exports destined for third markets other than China.

Based on a country-fixed-effects panel regression (1995–2010) of countries’ exports to China on the real bilateral exchange rate, Chinese real domestic demand, and Chinese real exports.

IMF staff estimates based on Asian input-output tables suggest that the domestic value added in Chinese manufactured goods fell from about 90 percent in 1995 to 75 percent in 2005, but has increased since then to about 80–85 percent in 2010.

China: Composition of Exports and Imports

China: Export and Import Prices, and Terms of Trade

(In percent of downstream employment)

(In percent of global exports of same category; value)

(In percent of total in each sector)

Selected Asia: Correlation of Exports to China with China’s Exports 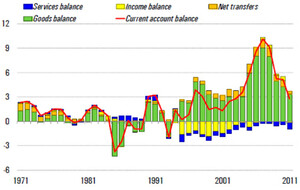 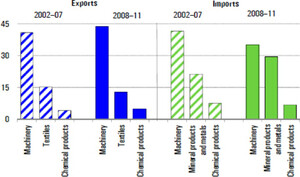 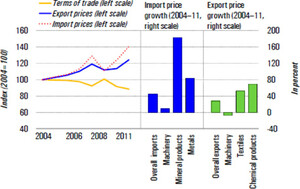 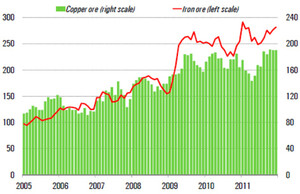 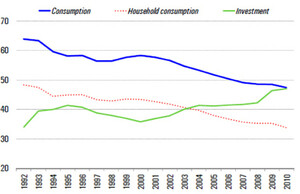 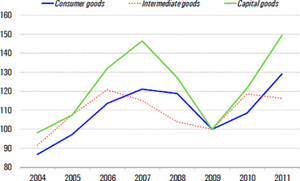 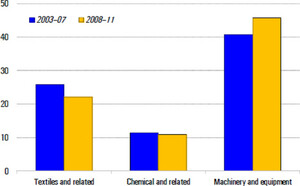 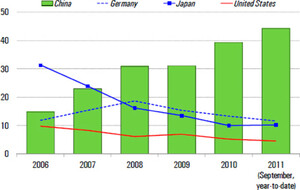 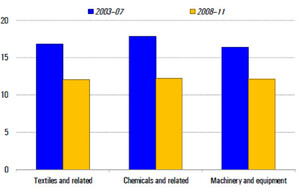 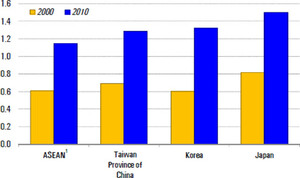 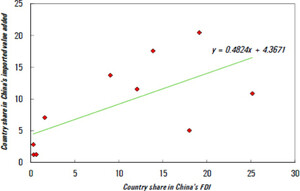 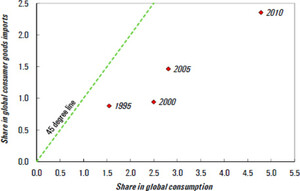 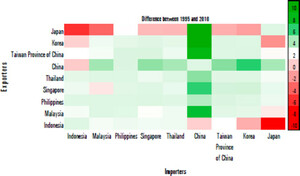 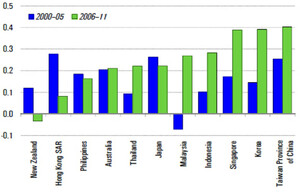 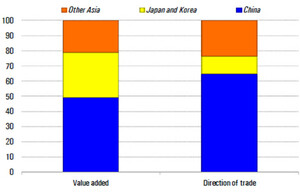