This chapter highlights a few issues facing Asian low-income countries (LICs) and Pacific Island countries (PICs). For most Asian LICs, headline inflation has picked up following the rise in global commodity prices in 2010 (Figure 5.1). Section A suggests that Asian LICs need to be vigilant in their inflation-fighting efforts, despite a recent slowdown in commodity prices. For Asian PICs, the main issue remains how to achieve higher and sustainable growth. As section B shows, over the last decade PICs have grown more slowly than emerging Asia and similar comparators. To increase their resilience, the PICs should continue to rebuild policy buffers and implement growth-oriented structural reforms.

This chapter highlights a few issues facing Asian low-income countries (LICs) and Pacific Island countries (PICs). For most Asian LICs, headline inflation has picked up following the rise in global commodity prices in 2010 (Figure 5.1). Section A suggests that Asian LICs need to be vigilant in their inflation-fighting efforts, despite a recent slowdown in commodity prices. For Asian PICs, the main issue remains how to achieve higher and sustainable growth. As section B shows, over the last decade PICs have grown more slowly than emerging Asia and similar comparators. To increase their resilience, the PICs should continue to rebuild policy buffers and implement growth-oriented structural reforms.

Headline inflation for Asian LICs reached a three-year high in 2011. Generally, food inflation has been the main driver of inflation (Figure 5.2). In some cases, however, the procyclicality of macroeconomic policies, along with second-order effects of higher food prices, contributed to raise core inflation rates. As of September 2011, futures prices for rice and wheat imply price increases for these major staples of about 10 percent through end-2012. Higher food and commodity prices carry with them a risk of more generalized inflation if they destabilize inflation expectations.

What Distinguishes the Current Inflation Episode?

A few factors distinguish the current inflation episode in Asian LICs from the one in 2007—08.

A few factors suggest inflationary pressure may continue in the near future in Asian LICs:

Error variances (in percent) of 3- and 12-month-ahead forecasts of each country’s inflation I rates. Sample covers 2005–11 period.

Horizon in quarters for Bhutan and Papua New Guinea.

Based on IMF Annual Report on Exchange Arrangements and Exchange Restrictions.

Error variances (in percent) of 3- and 12-month-ahead forecasts of each country’s inflation I rates. Sample covers 2005–11 period.

Horizon in quarters for Bhutan and Papua New Guinea.

Based on IMF Annual Report on Exchange Arrangements and Exchange Restrictions.

Amid unusual uncertainty over the global economic outlook, Asian LICs may be reluctant to withdraw policy stimulus rapidly. But accommodative policy stances can add to inflation pressures over the near term.

Most PICs seem to be stuck on a low-growth path (Figure 5.5). In the 10 years preceding the 2008—09 global financial crisis, PICs grew on average by only 2 percent a year—a much lower rate than the Asian LICs (6 percent) and countries of the Eastern Caribbean Currency Union (ECCU) (4 percent). PICs were hit hard by the 2008–09 global crisis, and they are recovering only slowly—although at different paces. Commodity exporters (Papua New Guinea and Solomon Islands) have benefited from high global commodity prices, but, excluding them, real GDP for the PICs fell by 1.2 percent on average in 2009. The flood in Fiji and the earthquake and tsunami in Samoa, in January and September 2009, respectively, further weighed negatively on growth performance.

The PICs’ recovery is also slower than that of Asian LICs and emerging economies. The slower recovery pattern reflects PICs’ relatively small export base, which does not allow the global recovery to feed into a large increase in external demand. Helped in part by the resilience of Australia during the crisis, the PICs have, however, recovered more strongly than some comparators in other regions, such as the ECCU, which relies more heavily on U.S. demand. Indeed, PIC growth performance appears to be strongly correlated to the business cycle in Australia and New Zealand (Figure 5.6). In particular, the strong appreciation of the Australian and New Zealand dollars supported the PIC tourism sector in 2011.

The PIC economies are also recovering more slowly this time around than in previous recessions. Over the past four decades, PICs have experienced five episodes of economic contraction—1975, 1980, 1987, 1997, and 2009. Only two of these five episodes coincided with global recessions (1975 and 2009). For commodity importers the 2009 contraction was milder than in previous downturns, yet the recovery has been much weaker (Figure 5.7).

What explains the current slow recovery of PICs compared to past episodes and relative to Asian LICs? A VAR analysis is carried out to identify which shocks have a larger and more persistent impact on PIC growth. Shocks to the terms of trade result in a considerably greater output loss than do shocks to external demand (Figures 5.8 and 5.9). This may explain the milder recession experienced by PICs in 2009 as well as the slower recovery, compared with previous episodes. By contrast, external demand shocks have a more substantial impact on output in Asian LICs (IMF, 2009), which may help explain the greater impact of the global recession on those economies.

Resilience to Shocks: Looking Ahead

PICs remain vulnerable to external shocks, although vulnerabilities differ across countries. In the event of a global downside scenario, Fiji, Palau, Samoa, and Vanuatu would be affected through falls in tourism, which accounts for between 20 percent and 50 percent of GDP. Remittances would be one of the main channels of contagion in Samoa, Tonga, and Tuvalu, and to a lesser extent in Fiji and Kiribati. A deterioration in the terms of trade would negatively impact Papua New Guinea and Solomon Islands. A fall in stock prices in advanced economies would also impact PICs with large trust funds whose assets are invested offshore (Kiribati, Marshall Islands, Micronesia, Palau, and Tuvalu), worsening fiscal sustainability in Kiribati, Marshall Islands, and Micronesia. Aid flows to PICs are expected to hold up well, in line with the experience during the previous crises and planned increases in official development assistance from Australian and New Zealand.

Fiscal space is limited in PICs, with high public debt narrowing the scope for countercyclical policies in Fiji, Marshall Islands, Tonga, and Tuvalu. In countries with large trust funds, fiscal rules that prevent additional draw-downs to finance budget deficits in the face of a crisis could lead to procyclical policies. Papua New Guinea and Vanuatu still have some fiscal space. Several islands have accumulated comfortable levels of foreign exchange reserves (Fiji, Papua New Guinea, Tonga, and Vanuatu), which could provide a temporary cushion. Greater exchange rate flexibility would be warranted in economies with relatively weak monetary transmission mechanisms. In Papua New Guinea, for example, the exchange rate channel of monetary policy continues to be effective, but excess liquidity is weakening the interest rate and credit channels. In Vanuatu, lower-than-anticipated inflation could allow a pause in monetary tightening.

To strengthen their resilience to shocks, PICs will need to step up the rebuilding of policy buffers and implement growth-oriented structural reforms, which would help boost investors’ confidence as well as ensure sustainable and inclusive growth. Focusing on the quality of spending, for example on education and infrastructure, could be key in lifting long-term growth potential. While rebuilding policy buffers, additional assistance from donors would also provide countercyclical support in several islands.

Note: The main authors of this chapter are Sonali Jain-Chandra and Olaf Unteroberdoerster.

For each economy, the overheating index of Figure 1.25 is a weighted average of inflation, real equity prices, real bank credit, and the current account balance as a percent of GDP (each as deviation from a linear trend, estimated over the last two decades), using the inverse of their standard deviation as weights. The color indicates the degree of overheating: a red color indicates that the index is above the 90th percentile of the distribution of the index for all economies and time periods; orange between the 75th and 90th percentiles, yellow between the 50th and 75th percentile, and green below the 50th percentile.

Arze del Granado and others (2010) show that for a broad cross-section of low-income countries, transferring one dollar to the poorest 20 percent of households via gasoline subsidies implies a budgetary cost of 14 dollars. This result also applies broadly to Asian economies in the dataset, including Bangladesh and Sri Lanka.

Note: The main authors of this chapter are Selim Elekdag, Fei Han, and Yiqun Wu.

Crisis dates are based on Reinhart and Rogoff (2009), and include banking, currency, and debt crises.

The rapid rise in nonbank intermediation poses a challenge in detecting booms (see Elekdag and Wu, forthcoming, for an example), implying that the perimeter of financial supervision should be widened to ensure that vulnerabilities are detected early and contained.

Note: The main authors of this chapter are Ravi Balakrishnan, Chad Steinberg, and Murtaza Syed, and it is based on their forthcoming working paper. Jingfang Hao and Sanjeeda Munmun Haque provided research assistance.

This chapter follows the old Regional Economic Outlook classification and so “NIEs” include Hong Kong SAR, Korea, Singapore, and Taiwan Province of China, whereas “ASEAN” refers to Indonesia, Malaysia, the Philippines, Thailand, and Vietnam only. “South Asia” in this chapter also includes Bhutan and Nepal.

Jaumotte, Lall, and Papageorgiou (2008) also argue that skill-biased technological progress is a key driver of rising inequality. In China, growing disparities between coastal and inland regions as well as between urban and rural areas are sometimes cited as explaining much of the rise in inequality.

The main sources of data are the April 2011 version of the PovcalNet database and the Penn World Tables. To this, household survey data for the NIEs is added, resulting in an unbalanced panel between 1971 and 2010, with the sample skewed toward the latter part of the period.

One important caveat is that Brazil entered the 1990s with a relatively higher level of inequality. A second caveat regarding India is that the last observation is for 2005, and thus the picture may have changed more recently.

The contrast is even more striking in the 2000s, as the latest datapoint for China is 2005 relative to 2009 in Brazil and Indonesia.

Balakrishnan, Steinberg, and Syed (forthcoming) model the determinants of inclusiveness more formally. The policies that follow are partly motivated by this work.

Hong Kong SAR introduced a minimum wage in May 2011, and Malaysia is considering one for 2012. Moreover, rates were increased in China, India, the Philippines, and Vietnam in 2011. China and Thailand are also looking at increasing existing minimum wages considerably in the near future.

By contrast for FDI flows, the share of intraregional flow accounts for about half of total flows, mainly on account of round-tripping between Mainland China and Hong Kong SAR, and FDI from Japan. Other regional economies only account for about 10–30 percent of intraregional FDI flows.

For the average country pair within the Asia region, our estimates suggest that cross-border portfolio investment is about 0.8 percent of own GDP lower than it would be for any other pair.

Typically, a risk-sharing index compares how growth in marginal utility of consumption differs across countries, which is indicative of how much risk is shared. Our index is similarly constructed, but is based on a term structure model and bond market data..

This chapter follows the old Regional Economic Outlook classification and so “NIEs” include Hong Kong SAR, Korea, Singapore, and Taiwan Province of China. For data availability reasons “ASEAN” refers to Indonesia, Malaysia, the Philippines, and Thailand only.

For example, the increase in official food imports and fertilizer subsidies in Bangladesh; selling off of strategic food stocks (meat) in Mongolia; and a new rice policy in Cambodia.

In Bangladesh and Nepal, some of these costs, especially related to oil, are being absorbed by state-owned enterprises.

(Year over year; in percent)

(Year over year; in percent) 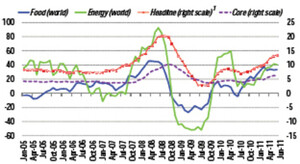 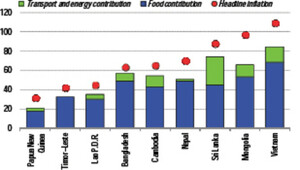 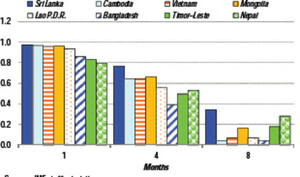 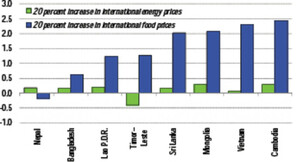 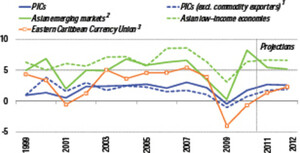 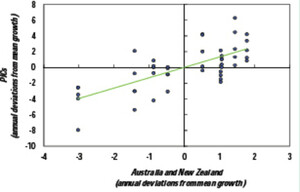 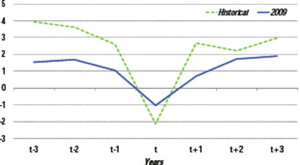 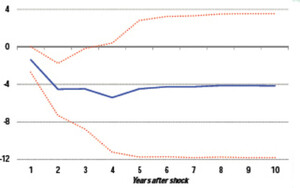 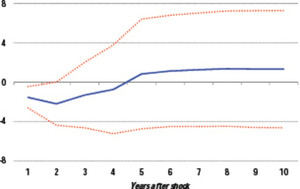